Bamboos are a subgroup of the grasses (grass family, Poaceae). There are 1,441 species in 116 genera in the grass subfamily Bambusoideae, more than whole  families of plants such as violets (Violaceae), oaks (Fagaceae) or geraniums (Geraniaceae). They are distinguished from other grasses because of the strong wood-like, jointed hollow stems, and the sizes they reach (10' and more).

Bamboos are primarily tropical and subtropical, found around the world but especially in Asia and South America. There is one native bamboo in the United States, giant cane or river cane, Arundinaria gigantea. It can grow to a height of 30 feet and formerly crowded low wet places from New York to Texas as monoculture wetlands (canebrakes). Today it is relatively rare, the land having been cleared for agriculture, and a series of species that relied on canebrakes are endangered or extinct, for example Bachman's warblers, Carolina parakeets, and white-eyed vireos.Bamboo is not a wood. Wood is produced by cells that expand horizontally within a stem, and becomes a trunk which adds additional cells horizontally. Bamboo stalks, properly called culms, often called canes, do not do that. They expand upward but do not increase in width, and the cane does not grow laterally. A big cane comes out of the earth as wide around as its mature size.
Bamboo canes are hollow except at the nodes, called partitions. This makes the canes light weight and allows easy use of them as tubes, for example as flutes and water pipes.

From a seed, bamboos spread laterally via rhizomes (underground stems). The rhizomes are generally very hard and solid. Some bamboos clump, the culms from the rhizomes staying close together, but others run, spreading out over the ground, forming groves, "canebrakes." Some individual plants extend for acres and are a hundred years old.

Like other grasses, bamboo leaves are edible by livestock. Humans love bamboo's new shoots. The giant panda specializes on bamboo, consuming really nothing else, and many other animals are happy to eat bamboo.

Many bamboos flower each year, but some very striking species spread for decades before flowering. Few people working today have seen madake, Japanese timber bamboo, Phyllostachys bambusoides, in flower, because it flowers only every 120 years. How do we know? Because when it flowers, it is dramatic. Bamboos that flower at long intervals have often spread over large areas, growing shoots and leaves without a flower bud. Then, one year, all the canes start to produce flower buds, flowers, and fruit. You can't miss it. So even though P. bambusoides only flowers once in anyone's lifetime, Chinese and Japanese scholars and then international scholars, carefully recorded its flowering, so we know it flowered in 999 and 1114 CE, in 1847-1850, and in the 1960s. Then madake died, leaving huge areas, once dense in bamboo, with only dead stalks. The mystery is made more intense because by the 1840s,  madake had been planted all over the world, and all over the world, it flowered and died: in China, Japan, the U.S. South, at Kew Gardens in England.

Bamboo's dramatic synchronized flowering (mast flowering) and death often causes great hardship for human and animal populations. A big resource for fodder and construction (the canes) is removed when the plants die.  Giant pandas suffered in 1975-1983 when two widespread bamboos they fed on both flowered, and this problem will likely be worse in the future, because, due to development, pandas cannot migrate to areas with nonflowering bamboo, as they did in the past.  Finally, feasting on bamboo seeds produces huge increases in the number of animals like rats, which, when the bamboo is gone, move into crops and villages, destroying food and spreading disease.

The longest a bamboo species is known to have gone before flowering is 150 years, but there are bamboos that have not been observed to flower, so perhaps they are waiting even longer. Substantial periods between flowering are not uncommon for bamboos, however. Species have been observed to flower only every 100, 60, 50, 30, 20 years, etc. (See tables in papers in References). Nobody really knows why they wait to long to flower. Dan Janzen, in a wonderful paper, argued that it is predator satiation; bamboo seeds are edible, but if they are only rarely available and then available in huge numbers, the mice, rats, squirrels, deer, hogs, chickens, people. and every other available seed-eater, will get full before they can eat all the seeds, leaving plenty to germinate and grow. A second argument is pollination is much better when all the plants flower at the same time (they are wind-pollinated). A third theory is that there is a cycle with wildfires; the dead plants make great fuel, and the fire clears out bare ground for the seeds. Phenomena that happen only every 100 years are hard to study, so there is no definitive answer. Or maybe, all of the explanations are true for some species of bamboo.

Not only is synchronized flowering odd, the next questions is "why so very long?" Mice don't live long, their numbers will drop to back to pre-fruiting levels in just a couple years; surely you can get enough flowering canes for good pollination in a decade, or you could clear a mountainside with fire after 20 years. The best suggestion, from Veller and colleagues (reference below) is that bigger plants have more seeds, so if a bamboo waits 40 years to flower it'll have more seeds than those that flower after 20 years. This works, if you assume that if a plant flowers alone at 30 years all its seeds will be eaten, so to succeed it stays synchronized by doubling or tripling the time, flowering with shorter-lived bamboos. Being older and bigger, it contributes more seeds and so gets a large percent of the seedlings. Thus, plants that flower after longer periods come to dominate the forests of bamboo and flowering interval lengthens. Although a strong evolutionary arguement, this idea is hard to test in real bamboos.

And then there is the mystery of how the plants of a single species all start to flower at the same time wherever they are growing. Actually, species usually flower over several years, but compared to decades of not flowering, that is coordinated. It can't be environment if they are growing in different places, so some internal timing mechanism is postulated. Quite an alarm clock, set for 120 years from now! Recent analysis suggests that particular clones, not whole species, all flower in the same year. In a long-flowering interval bamboo, the plants carried across the world were cuttings, not seeds. Thus the plants representing the species in London and New York as well as Tokyo and Shanghai, are parts of the same clone. Nevertheless, the genes that induce a clone that has been growing on different continents to flower in the same year after 120 years since it was a seed, and the chemicals they release to make that happen, remain unknown.

As far as I know, no other plant spreads like bamboo and the flowers just once after decades and dies. To put that into a context and not have it be just an amazing story means understanding what the conditions were for such long flowering times to evolve--answering the questions above--and then going on to ask what is different for bamboos that flower every year or every 30 years. There are great botanical questions that the mysteries of bamboo bring into focus.

Clever botanists can solve many problems with neat experiments, but they can't hurry time, so only for relatively short flowering interval bamboos, like 20 years, can the flowering dynamics of one generation be compared to the next by the same botanist. I think there will be bamboo mysteries for many years to come. 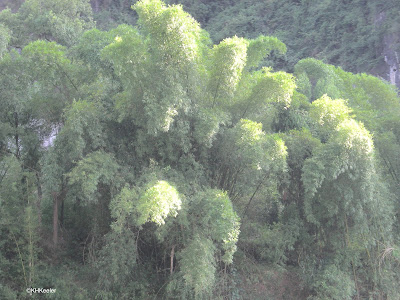 Note: where the internet says madake, Japanese timber bamboo flowers every 130 years, that appears to be an error. I can find nowhere in the literature that makes carefully checked lists of bamboo life spans where it says madake flowers every 130, only 120 (and sometimes less).

Ben K. 2019. Once-in-a-hundred years' sightings of bamboo blossoms reported in Japan. Japantoday. link (I could not find reports of madake flowering in the 1960s, but bamboo flowering is news.)

Posted by A Wandering Botanist at 9:11 AM