As the summer winds down, splashes of gold appear on the roadsides and in the prairies and meadows: goldenrod! Depending on where you are, you see a different group of goldenrod species, but they are found all across North America. In fact, goldenrods are a predominantly North American group; there are about 100 species, of which 77 are native to North America, 8 to Mexico, 4 to South America, and 6 to 10 to Eurasia. 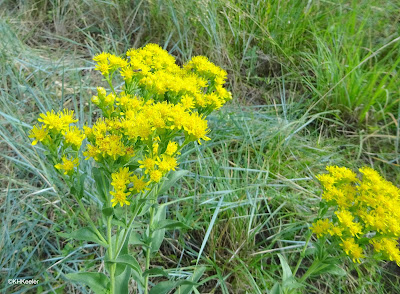 The name goldenrod seems obvious, a tall "rodlike" plant with golden flowers. Solidago, the scientific name, was given it by Linnaeus in the mid 1700s and is based on the Latin word solidus which means whole. The experts interpret this as saying that goldenrods make you whole, because the European species (Solidago vigaurea) was "a sovereign wound-herb, inferior to none" to protect and heal wounds, according to Culpeper in 1653 (p. 168). 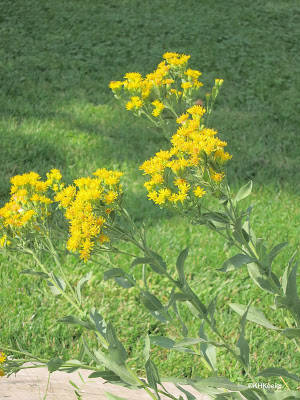 Across North America the 77 species of goldenrod are difficult to separate. About 50 years ago, Fernald, in the reissue of Gray's Manual of Botany, a flora that covers the eastern U.S., wrote, "it is one of our most difficult genera. Natural hybridization frequently occurs and the species are highly plastic." (p. 1391). Semple and Cook in The Flora of North America (2002) say there are good analyses of the genus, but with a list of plants 77 long, separated by large and small characters, some using the whole plant or flower or leaf characters, it is hard work to start at the beginning and work out which species you have. Fortunately, most places have ten or fewer species, so you can focus on determining which of those it is. Furthermore, often the species found in the same region are quite different--tall or short; found on hilltops or boggy areas; flowers in a round cluster or flowers in an elongated group--making it relatively easy to learn your local goldenrods. Alas, that does not help if you are two states from home, wondering what goldenrod you are seeing.
This is threenerve goldenrod, Solidago velutina, with a wide range across the west, growing in my garden.
and the honeybee in the upper right.
The goldenrod below has a very different look. It is probably Canada goldenrod, Solidago canadensis in western Nebraska. The photos are from late summer years ago, so there are a few golden flowers and lot of developing beige fruits.

Goldenrod flowers are tiny florets tightly bunched together to form small composite heads, standard for their plant family, the sunflower family, Asteraceae.  The second threenerve goldenrod photo and the last photo below show the flower head structure best. The flower heads then form a cluster which makes a splash of color that is visible for a considerable distance. Their flat open shape is easily accessed by bees, flies, butterflies, and moths. Each floret has only a very tiny amount of nectar, but goldenrods are very attractive to insects. Studies suggest that insects won't come to tiny bits of nectar when the air is cooler, but in late summer, the warm temperatures make it easy for insects to warm up enough to fly, and the flat arrangement of flowers allows walking between florets, which consumes much less than flying, so insects can refuel on the tiny nectar drops in goldenrod florets. Being common and flowering abundantly, goldenrods are in fact a critical source of late summer nectar for many insects.
Across the U.S., goldenrods are amazingly important host plants for native insects. They are known to be fed up on by 115 species of butterfly and moth. Mostly when I look up a native plant, I find one, maybe two butterflies or moths that use it as a host. National Wildlife Federation NativePlantFinder (link) ranks goldenrod the top insect-supporting host plant for my zip code, with 78 butterfly and moth species hosted. I saw very few butterflies this summer; I hope the goldenrod attracts and encourages them.
Goldenrods do not contribute to allergies. Human allergies to plants in flower are reactions to pollen that they breathe in. Like other insect-pollinated plants, goldenrods do not produce a lot of pollen and what they do produce they stick onto the bodies of insect visitors to carry to another flower. Goldenrod has the bad name for allergies because it comes into flower at the same time as ragweed. Ragweed, Ambrosia species, (sunflower and goldenrod family, Asteraceae) is wind pollinated, releasing vast clouds of pollen, so that some of it will reach another plant through the air. Not needing to attract insects, ragweed flowers are green and inconspicuous. Goldenrod is a valid indicator of pollen allergy season, but not the cause of the allergies.

Goldenrod seeds are tiny and nondescript to a human, but they are eaten by all kinds of small birds, sparrows and chikadees, for example.

Goldenrod has been used medicinally in Europe for centuries, especially to heal wounds. Scientific study in recent years (German Commission E) found the European goldenrod (Solidago vigaurea) effective treating urinary infections and kidney and bladder stones. Similar uses have not been verified for American goldenrods; WebMD lists lots of uses for goldenrod and calls all of them "unproven."

Goldenrod flowers make a strong natural dye, which can be bright yellow to olive green depending on the mordant (metal ion used to fix the dye.) You can also dye with the whole plant including the flowers, which saves a lot of effort. Goldenrods were widely used for dyeing during early settlement of the United States and Canada, replacing yellow dye plants from Europe that were unavailable in the New World.

Goldenrods folklore was associated with gold and wealth. If you held the plant in your hand, the direction the head nodded indicated hidden or lost items or buried treasure. Likewise if a goldenrod plant grew (without being planted) near the door to the house, it indicated that there would be great good fortune.
May you find goldenrod growing by your doorstep!

Posted by A Wandering Botanist at 2:59 PM