And, since I was a child, what I liked best were the seeds. Big, round with a bulge at one side, such fun to collect! You can see them in the photo below, round black shapes, for example at the base of the flower in the center.

I collected them, saved them, and then planted my seeds the next year. Very satisfying.

The four o'clocks commonly grown as annuals in temperate gardens are Mirabilis jalapa (four o'clock family Nyctaginaceae). They've been popular garden flowers for easily 400 years. Gerard's Herbal (1633) describes them, under the English name marvel of Peru. That is probably their oldest common name, and currently the one the USDA Plants and Missouri Plant Finder websites use; a very flattering name!

Four o'clock is a more recent common name. It reflects their flowering time. The flowers open about 4:00 in the afternoon. The photo above and especially the one below were obviously taken before four o'clock (9 am in fact).

The scientific name is equally flattering, Mirabilis, meaning marvelous, wonderful, and extraordinary, in Latin. The species epithet,  jalapa, refers, according to Missouri Plant Finder, to Jalapa, Mexico, so "of Jalapa." Brought to Spain from the Americas in the 16th century, four o'clocks were taken up by gardeners all across Europe. The fact that their scientific name refers them to Mexico and the common name to Peru suggests there was confusion about just where they came in the Americas. However, they was probably growing all across tropical America when the Europeans arrived, having been domesticated long before that.
There are more than 60 species in the genus Mirabilis, mostly native to the Americas. Twenty-five species are native within the United States. Most of those are small and known only to biologists, but are similar enough to marvel of Peru that they are easily recognized as four o'clocks.
You can see in the photos below why four o'clocks were such a hit in Europe: handsome tubular flowers. They are worth waiting all afternoon for. Opening at the end of the day, they stay open all night, but fade quickly in the morning. The flowers have a lovely fragrance. Studies looking for pollinators find very few, mainly hawkmotha. But they self-pollinate readily, producing lots of seeds. Night-blooming plants tend to have pale flowers, which are much more visible in the dark than the red and purple four o'clock flowers in my photos. The bright flowers of four o'clocks may be due to breeding in  cultivation. However, since they open in late afternoon, four o'clocks wild may have had red flowers to attract day-flying pollinators such as hummingbirds, which particularly like reds. 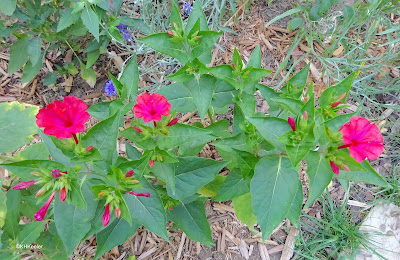 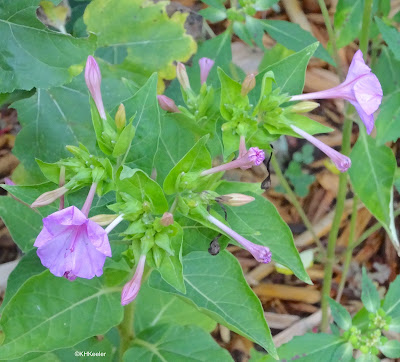 As my photos show, the flower colors range from yellow to red to purple, and there other shades of red and purple as well as white flowers. Geneticists about 1900 found them easy to work with and tried crossing the colors, leading to the discovery of incomplete dominance. When Mendel crossed peas, one color was dominant to the other, so purple-flowered peas (AA) crossed with white-flowered peas (aa) gave only purple-flowered peas (Aa), but in the next generation the purple-flowered peas produced 3/4 purple-flowered plants (AA and Aa) and 1/4 white-flowered plants (aa), the classical Mendelian ratio of 3:1. When Correns crossed red four o'clocks (RR) with white four o'clock's (rr), he got pink flowers (Rr). Crossing the pink flowers (Rr x Rr) produced 1/4 red (RR), 1/2 pink (Rr) and 1/4 white (rr). You can say, as Wikipedia does, that this is an exception to Mendel's laws (see it in a color diagram on wikipedia link). However, as you see from the standard genetic notation, it is the same cross, the difference being that the color doesn't "dominate" the white as fully in four o'clocks as in peas. I loved this kind of classic genetics when I first learned of it. I thought the different types of outcomes when two different color forms (alleles) recombine absoutely fascinating. (Showalter's paper from 1932 summarizes four o'clock flower color inheritance. It can be complex, because there are multiple color alleles and several different genes influence flower color. Paper at https://www.genetics.org>content>genetics>568.full.pdf, a pdf.)
The bright flowers have been used in making food colorings.
Frost kills four o'clocks, but they are frost-sensitive perennials, not annuals, and can grow into quite big plants if protected from frosts.
Gerard, writing in 1633 about this marvelous, relatively new plant, went on at some length about preserving the roots for next year. He described putting the roots into a pot and storing them in a warm cellar, but then said that his favorite method--which had never failed!--was to put the roots into a butter firkin (a small cask used for butter), fill it with river sand. and store it in a corner of the house all winter without additional moisture. In March or April, he removed the roots and planted them. Gerard's care makes me feel cavalier in my treatment of four o'clocks. They seem ordinary today, but they weren't to Gerard. 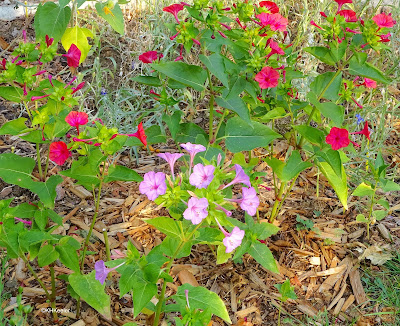 I grew four o'clocks this year for the first time in about five years. I didn't mean to save seeds, but I couldn't resist gathering a few, and then a few more, and then, well, they'd likely perish in the Colorado winter, so I brought them in and put them in an old pill bottle. Guess I'm going to plant them out this coming spring, since I hate keeping seeds unplanted until all have died. So without any intention, I'm once again a four o'clock seed saver, using one year's seeds in the next year's garden. Try it yourself!
Comments and corrections welcome.
Irresistable post script: The explanations of jalapa in Mirabilis jalapa that I found seemed uncritical to me. Authors write "from Jalapa, in Mexico" or "from Jalapa, in Guatemala" without seeming to notice that there are not only cities called Jalapa in both Mexico (Xalapa today) and Guatemala, but also in Nicaragua. Which did Linneaus mean? Or did the early explorers call a much larger area Jalapa? Furthermore, jalap is the name of a medically important morning glory, Ipomoea purga, used as a strong laxative, which was at one time called Ipomoea jalapa. In that case, jalapa is from the native name jalap, not from a geographic region. (Well, except the plant's common name could have taken from the region.) The four o'clock is sometimes called false jalap. Both plants have tubular pale purple flowers. The roots of Mirabilis jalapa are reported to be laxative. There may be a more complex story here. The writer of the wikipedia article came to similar conclusions.

Posted by A Wandering Botanist at 2:37 PM