We planned a return to pre-pandemic travel, a trip to Edinburgh, Scotland. We would spend week in a nice hotel with day trips into the countryside. The plan was good, but didn't allow for catching a cold. I haven't had a cold in easily five years...I felt lousy and lacked interest in being a tourist. However, I have argued that you can enjoy new places without the need to rush around to see everything. Looking back, the very reduced vacation was still neat.

First, Edinburgh didn't look, smell, or sound like Colorado. I can't show you the humidity or the echos bouncing off the old stone buildings, but here's how it looked. Note the gray skies. We had rain every day, but generally only as a shower. 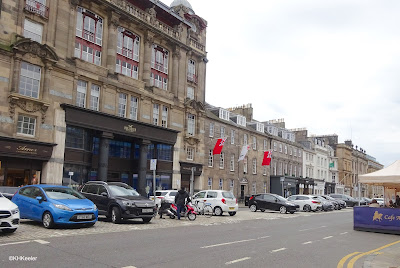 Edinburgh Castle overlooks the New Town, where we stayed.

There were outdoor tables at most restaurants, probably carryovers from Covid.

They tended to have dramatic, real and artificial flowers, hydrangeas, big roses, geraniums, mostly 4" or more across, whether all around the outdoor seating or festooning the entrances. Indoors there were lots of flowers too, but not such big ones. 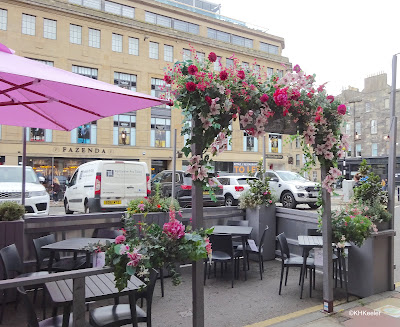 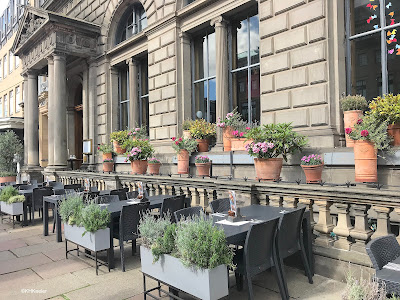 Many places had pots of rosemary and lavender. I came upon a planting of lavender, much like the one in the gray box in the photo above, just as a rainshower was ending. The scent was amazing, reaching out several feet from the plants.

Of course there were international weeds to admire. These two plantain plants (Plantago major) were flat as pancakes, growing in a parking spot in an area of intense foot traffic. Both are flowering.
Then there was urban whimsey. First this "Do Not Enter" sign:
And, not far away, a second version: 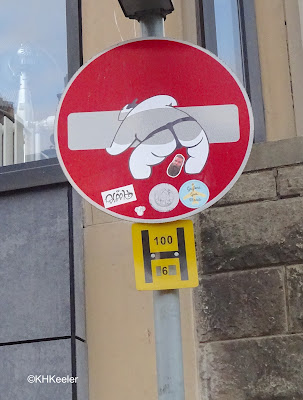 And, for an American, used to "Detour" signs, the Diverted Traffic signs were, uh, diverting... 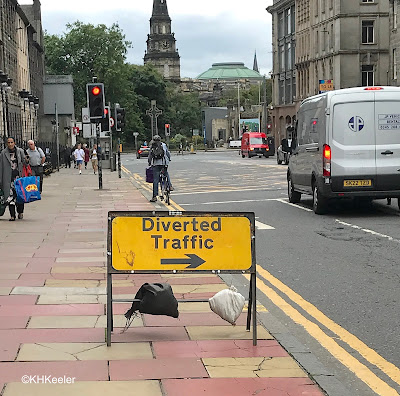 I walked around as my energy allowed. I listened to people talk, enjoying the accents on the words and the different choices of words. I ate three kinds of fish I don't usually get, and neeps and taters, haggis, black pudding, tablets, and Scottish tea cakes. I passed on the Fiery Scotsman Burger (below) and pizza with haggis, but enjoyed good food and unfamiliar tastes. 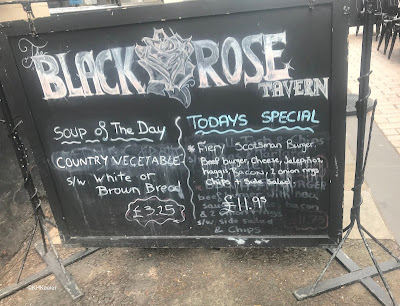 I missed some of the great tourist sights for lack of energy. (I saw more than just around George Street, but will talk of that in future blogs.) But you don't have to do everything to have a good time. Beautiful and complex cities like Edinburgh would take months to explore properly. I only intended a glimpse...and a lovely glimpse I got!
Comments and corrections welcome.
Kathy Keeler, A Wandering Botanist
More at awanderingbotanist.com
Join me on Facebook: https://www.facebook.com/AWanderingBotanist