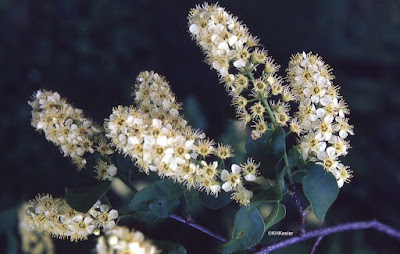 We call them chokecherries. They are native American shrubs or small trees, in the same genus as cherries and plums, scientifically Prunus virginiana. They grow all across North America except the deep South (USDA map). We could have called them Virginia cherries, a much more dignified name. The name chokecherry name probably comes from the fact that the raw fruits are a shocking experience to your mouth: you pop one in and oh! my! it is sour, puckery, chokingly astringent. Yet chokecherries are edible and were widely used by Native Americans and settlers. Fruit pictures

One key to eating chokecherries is simply not to eat them raw. Dried, they sweeten and the astringency vanishes. Consequently they were an important preserved food. Cooking also destroys the astringency, and with sugar added, chokecherries make pleasant jams, pies, wines and brandies. However, they still have much bigger pits than commercial cherries, or I could say, less flesh around the pit, so preparing jam or pie is harder work than if you use cultivated fruit. I don't expect chokecherries to replace European cherries any time soon.

But note: chokecherries are native to North America, commercial cherries are from Eurasia. Virtually all the native peoples of North America used chokecherries. They were part of the ancient Puebloan diet, though we don't know how they prepared them. Almost certainly tribes all across North America used them long before European contact. Ethnobotanists recorded many tribes using chokecherries, in lots of different ways. The Quebec Algonquins made chokecherry preserves and wine. The Ojibwa combined meat and dried powdered chokecherries to make soup. The Blackfoot crushed them as a special occasion juice for a family member. The Utes sundried them for later enjoyment. The Cheyenne made chokecherry cakes, also sundried. The Lakota combined chokecherries with cornstarch and sugar as a pudding. The Jacarilla Apache pounded chokecherries into meal and savored them as a sweet at festivals. The Navajo cooked them with cornmeal. The Zuni made several chokecherry sauces. Virtually all tribes reported eating them fresh and dried, alone or as pemmican.

Of course, there are some problems. For example, the lovely birds that ate the fruits will deposit the seeds elsewhere in your yard. Up will come small unwanted chokecherry trees. In addition, chokecherry trees clone, sending out suckers that form a thicket if you let them.

But if you are chopping out chokeberry shoots, consider that the wood was very useful. The tough, flexible wood was preferred for bows by tribes including the Ute Mountain Utes. Across the continent chokecherry wood was fashioned into everything from arrows to digging sticks and roasting skewers. It remains attractive to wood carvers today.

Several tribes used the sap, mixed with other materials, as a glue. With colored clays added, it was a paint for Montana Indians. The Shuswap mixed the berries with bear grease to create paint. In the Great Basin, chokecherry fruits made a dark red to red-brown dye.

Chokecherries also functioned as botanical calendars. In the Northwest, the Okanagan-Colville knew the salmon run was immanent when the chokecherries were ripe. Similarly, on the plains, the Pawnee and the Ponca used the ripening fruit to indicate it was time for the Sun Dance. 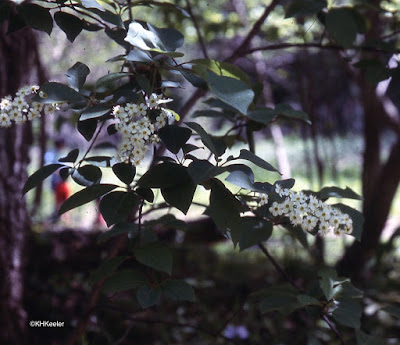 Posted by A Wandering Botanist at 1:12 PM