Visiting Baja California--Flowers in the Desert

Deserts are stressful places for plants. Water is in short supply and often unpredictable in its arrival. Growing and flowering are difficult, since they require water. Yet plants like the mesquite, above, and the cardón cacti, below, were in flower in the dry Baja California desert in April.

Deserts plants cope with drought various ways.  Annual plants are opportunists. They spend most of the time as seeds, then grow, flower and go to seed within one to four weeks after a good rain, not to reappear until the next heavy rain. Other plants are perennial, visible members of the community. They have woody stems that increase in size or expand without wood from a big root system. Perennial plants must store water, soaking it up like a sponge when it rains, so that they can consume it slowly during long dry periods. Some perennials flower based on rainfall, but others flower the same time every year, using their stored water.

On the islands of the southern half of the Gulf of California (Sea of Cortez), a surprizing number of perennial plants were flowering in mid-April.

Most noticeable was the cardón cactus (Pachycereus pringlei). This relative of saguaro is the tallest and most massive of cacti, endemic to western Mexico.

It is bat-pollinated. We were not out watching it in the night, so did not see bats. What we did see were early morning honey bees visiting the flowers. They probably do not pollinate very often. To pollinate an animal has to carry pollen from one flower to the stigma of another. The stigma of cardón cacti is in the center of the flower. You can see the honey bee can gather pollen all around the flower without ever touching the tips of the stigma. The flowers are one-day flowers--actually one-night flowers--so pollen collecting by bees in the morning is likely irrelevant to cardón reproduction. It was already pollinated or it wasn't. 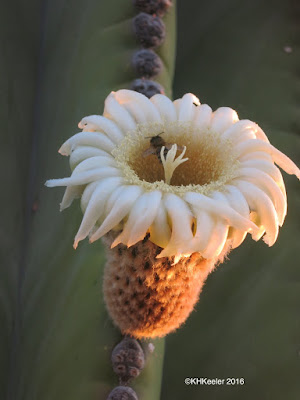 Also flowering was the giant barrel cactus (Ferrocactus diguetii). Endemic to islands in southern Gulf of California, I saw it on Santa Catalina island. They grow to 15' high and 3' in diameter. I had to photograph a short one to get anywhere near the flowers.

The red flowers of the cactus below, the Magdelena cochemiea, Cochemiea halei, were absolutely spectacular. Magdelena cochemiea is endemic to the Magdalena and Santa Margarita islands in the Gulf of California and a bit of the adjacent coast on the Pacific. We only saw the one plant, though of course we looked for others. Since the big red flowers (more than an inch long) are clearly pollinated by hummingbirds, smart strong-flying animals, the next plant did not have to be close by for pollinating hummingbirds to find it, causing cross-pollination.

Beyond the cacti, there were other wondeful flowers to discover:  For example this beautiful pale blue felt-leaf morning glory, Jacquemontia abutiloides (morning glory family, Convolvulaceae). Found throughout most of southern Baja California, it is a perennial vine that climbs over surrounding plants, making the tangle you see. It clearly had stored enough water because despite the dry conditions, it had lots of green leaves. It was growing in an arroyo, which probably gave it extra water during rainstorms and some shade during the hot sunny days.

Adam's tree (Fouquieria diguetii, Fouquieriaceae) is a ocotillo relative found only in southern Baja California and adjacent areas. The Fouquieriaceae is a family of one genus and eleven species, endemic to the southwestern North America, especially Mexico. Only ocotillo (Fouquieria splendens) makes it north into the United States and only one species is found south of Mexico (link). Adam's tree is a spiny shrub, very open and hard to photograph. The leaves had fallen off by the time I saw it, leaving naked spiny branches. It was flowering. The flowers attracted hummingbirds. I saw hummingbirds visiting it, but couldn't get a photograph.

Here (below) I did sneak up on a pollinator. The little green bee is carefully taking pollen from this Baja California nightshade, Solanum hindsianum (tomato family Solanaceae). It gets pollen all over itself in the process and will pollinate if it visits another flower. This is a rather widespread plant, found as far north as southern Arizona. The familiar look of the flower reminds me that the genus Solanum includes tomatoes (Solanum lycopersicum), potatoes (Solanum tuberosum) and eggplants (Solanum melongena).

These next three photos are wild cotton, Gossypium. When I took them I thought I was looking at three color variants of Davidson cotton, Gossypium davidsonii, a wild cotton of western Mexico. However, there are five species of wild cotton found in the area of Baja California I visited, and my book doesn't even mention the names of three of them. So the best I can say is that there were very pretty wild cottons in Baja California. They really are cotton: the seed pods are filled with fibers, if you haven't see them in nature the look rather like the cotton balls protecting pills in a bottle, but often not pure white with seeds embedded in them (here are photos). 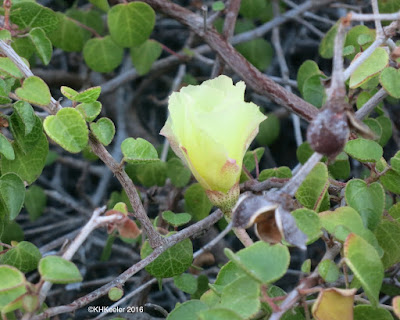 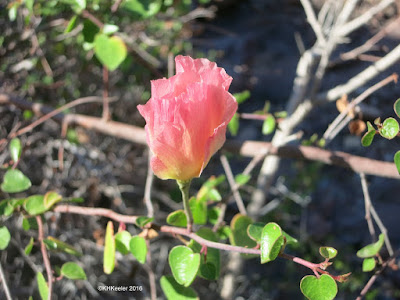 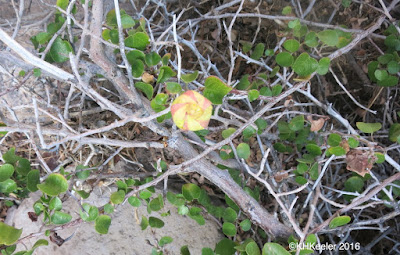 Despite that fact that it was April and there had been little rain, these and many more plants were flowering. Some, logically, in seeps, others clearly from stored water.

And where plants flower, animals come: below, a butterfly silhouetted on ironwood, Olneya tesota (pea family, Fabaceae). The flowers on this slow-growing tree, found from southern California across the drier parts of western Mexico, were a pale pinky purple (next photo). It is an important plant for wildlife and also as a spiny host that protects young plants of many species.

Perhaps the beautiful flowers were even more exciting to find because the landscape looked so barren.


How to see the endemic plants of the desert islands in the Gulf of California? An easy way is to take a ship-board tour. Mine was with National Geographic (link). 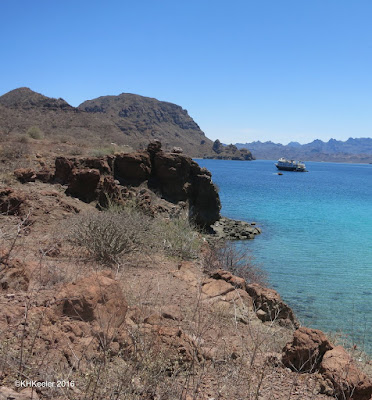 
References
Rebman, J. P and N. C. Roberts. Baja California Plant Field Guide. 3rd ed. Sunbelt Publications, San Diego, CA. Without this reference and its excellent photographs, I'd have the plants above identified only to family or genus.

Posted by A Wandering Botanist at 1:21 PM