Plant Story--Marigolds from the Americas

So, who are the marigolds, genus Tagetes?

The previous post (link) was about calendulas, called marigolds, now more properly called pot marigolds, important plants through much of European history. In the 1500s, a different group of flowers, species of the genus Tagetes (sunflower family, Asteraceae) were introduced to the Old World from the Americas. People loved them, called them marigolds and presently they became the plants people recognized as marigolds, not the Eurasian calendulas.

Marigolds, Tagetes, were not wildflowers when they were brought to Europe (by 1520). The Aztecs and other Native American groups had been growing them for centuries.


There are some 57 species of Tagetes native to the Americas. The name Tagetes was created by Linneaus, naming them for the Etruscan religious figure Tages.

(Botanical sources say Tages was an Etruscan god, son of Jupiter. Sources on the web about the Etruscans say he was a human prophet with magical powers (link). How do I reconcile this?  Well, perhaps Linneaus didn't have good information about Tages when he chose the name and got the story wrong. The internet gives us amazing power to look things up! My plant books all say Tages was an Etruscan god, son of Jupiter, who sprang full-grown from a plowed field. I don't own any books on the Etruscans so nothing in my print library contradicts that. But now I can find all kinds of ancient history sites on the web and get quite different information. Which finds contradictions but doesn't explain them.)

Marigolds are mostly herbaceous plants--a few are shrubs--with yellow to orange flowers and a distinctive, spicy smell. The African (or Aztec) marigold Tagetes erecta, the French marigold, T. patula and the signet marigold T. tenuifolia are the most widely grown species. 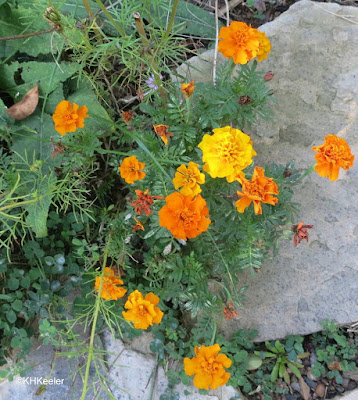 These three species and others such as Mexican tarragon (Tagetes lucida) were grown by the Aztecs in Mexico and Guatemala and the Mayans before them. The plants were used ceremonially and medicinally. It is not clear if marigolds were eaten much. The Europeans who recorded plant uses in the 1500s focused on medicinal plants. Certainly marigolds weren't major crops like corn and squash. That marigolds were not common foods is reflected in Aztec gardens. The Aztec emperor and his high nobles owned elaborate gardens of only nonfood plants: growing food was for peasants. The imperial gardens were incredible show places of sacred and rare plants and at least some marigolds were grown in those gardens.

Tagetes erecta  has been called the African marigold because it was taken to Africa from Mexico, where the plants escaped to become roadside weeds. In 1535, when the Holy Roman Emperor Charles V led an expedition against the Barbary pirates in Algeria, he found fields blooming in marigolds. He called them Flos Africanus and brought them back to Europe, hence the name African marigold. (photos online) Modern sources prefer to call them Aztec marigolds. (However, all the common marigolds are Aztec plants.)

As in many cultures, ceremonial and sacred uses attracted greater respect than any others.  Tagetes erecta was a sacred flower, cempoallxochitl, "twenty flower." Cempoallxochitl was the flower of the goddess Cihualcoatl-Quilaztli, one of the aspects of the fierce mother goddess Coatlicue. Cihualcoatl-Quilaztli helped women with pregnancy and childbirth--roles regarded as just as valiant as being warriors--and honored them in death. In addition, she protected plants and plant-spirits (all things were animate in their religion). Cempoallxochitl, also called the "flower of the dead," was used in vast quantities in Cihualcoatl-Quilaztli's ceremonies. It flowered abundantly at the time of festivals honoring the dead. In modern Mexico, festivals honoring the dead, now Christianized but tracing their roots to the Aztecs (link), continue to make extensive used of marigolds. Today the flower is still called the flower of the dead (link). The Mexican Day of the Dead, November 1, is a celebration of those who have gone before us: being the flower of the dead is not at all a negative association.

(Online sources give the goddess of the underworld, Mictlantecuhtli, as presiding at the Day of the Dead, but my understanding is that the Aztecs had a complex route to the afterlife. Warriors and women who died in childbirth went the most directly to a pleasant afterlife, so Cihualcoatl-Quilaztli was very involved in celebrating the honored dead.)

Also from the Aztecs came Tagetes patula, with red-and-gold flowers. It was introduced first to France (likely from Spain) and went from there to England, so the English called it the French marigold. (pictures online) (link) The species epithet patula means jeweled. The French marigold is often red and yellow. That original variety, building on its sacred status from the Aztecs as a marigold, led to people across Central America to see it as a symbol of the slaughter of the native people by the Spanish invaders: the yellow represents the people, the red the blood spilled.

Increasingly common is in the south and southwestern United States is Mexican tarragon, Tagetes lucida, previously T. florida, sometimes called Mexican mint marigold, a perennial requiring warm conditions. (online photos) Used in Mexico as a medicine and spice, its Mexican names include yerba anís, pericon and santa maria. In a tea it was a traditional treatment of stomach ache and nausea in children in the southwestern North America  (more information). The tea also treated scorpion bites and fever and was used as an aphrodesiac. It was mixed with tobacco and smoked as an halucinogen by the Huichol in Mexico. It is often reported in the historical literature as a psychoactive drug, though Robert Neher, writing about it in 1968, didn't experience any effect. Petals of Mexican tarragon were thrown into the faces of prisoners being taken to be human sacrifices, since it was believed to be have calming narcotic effects. Marigolds are the most abundant plant found by archaeologists at Aztec sites where human sacrifices were carried out.

Another sacred Aztec marigold was yyauhtli, "cloud plant," and used ceremonially, as incense, and as a medicinal. Some of my sources identify it as Tagetes erecta, more recent ones as T. lucida. Its identity is a guess since the information about yyauhtli appears in the Aztec herbal of 1552 (See samples of illustrations from 1552 link and think about trying to name those plants). It is agreed to be one of those two plants and not some other. Medicinally the 1552 herbal recommends yyauhtli to remove ticks from the skin, to counter diarrhea and to stop the spitting of blood. Yyauhtli was combined with cypress and papalo-quilitl  (Porophyllum viridiflorum, an aromatic Mexican marigold-like plant) in water, warmed and rubbed on the chest to cure hiccoughs. It was part of a complex treatment to cure someone struck by lightning (complete formula).

Yyauhtli also had what we would call magical powers: the Aztec herbal describes that, to safely cross a river or other body of water, an Aztec should moisten the chest with juice of yyauhtli and one of the papalo-quilitl species, crushed in water. Then he (or perhaps she) should take in his hands a beryl and the head and viscera of an oyster, and put into his mouth, but not eat, a sardonyx and the eyes of a large fish. So prepared, he could cross the water safely. While that sounds bizarre, tropical rivers had strong, unpredictable currents that could pull you under, hungry alligators, poisonous snakes, revolting leeches and aggressive fish such as piranhas, to name the risks I know of. Not something to do lightly.

A fifth marigold grown in the United States is Tagetes lemmonii. It is a shrub marigold native to New Mexico. Rare in the wild, it is called Lemmon's marigold, Copper Canyon marigold, mountain marigold or New Mexican marigold and sold as a landscape plant in the southwestern U.S. (story of discovery) (photos).

Not cultivated but growing as a weed in the southeastern United States and California is Tagetes minuta, called muster John Henry, stinking roger and wild marigold. The flowers are small (hence the species epithet minuta "small" or "miniature") but the plant can be more than 6' tall. (photos). This plant is used to produce most of the tagetes oil made worldwide (link, link2). It is highly repellent to flies of all sorts (Diptera), and so widely used to repell insects, especially in Africa where it is a widespread weed. If cattle eat it, the milk and butter become very bitter.

Most information available to me on the marigolds outside the United States is from Mexico, but they grow all across Central America and deep into South America. The Aztec marigold, French marigold and muster John Henry all appear as medicinal herbs in the Amazon, used for treatments from eye washes to settling the stomach to driving out worms. Ethnobotanical works report these and other Tagetes species as traditional medicinals all across the Americas.

In the 20th century, Burpee Seed Company, loving marigolds, focused their plant-breeding energy on them, producing an array of sizes, colors including white, and doubles (examples), resulting in the great diversity of marigolds available in the United States. In the 1950s Illinois senator Everett Dirksen tried unsuccessfully to get the marigold named the national flower of the United States (story).

Today marigolds are so confused with calendulas (post about calendulas) that information found online, especially European folklore and edibility, often was initially from calendulas (about the confusion link). There's no need to borrow calendula lore, marigolds have a fascinating history of their own.

Posted by A Wandering Botanist at 1:10 PM