Japan! I loved the contrasts 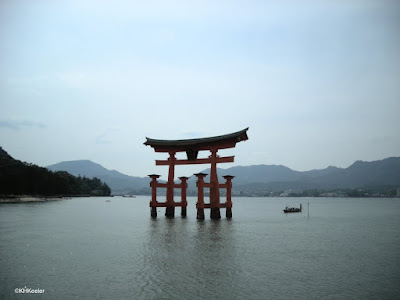 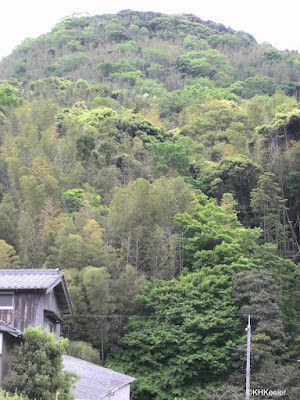 And of course, fascinating plants

My husband and I visited gardens in Tokyo in early March, 2010. We were so cold! Not much was growing...and yet there were spectacular views. 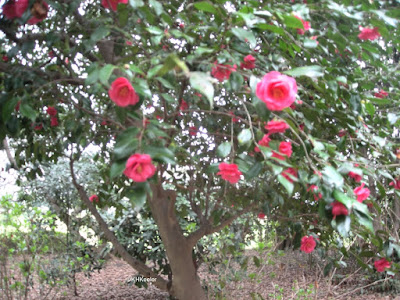 The camellias (several species, genus Camellia, tea family Theaceae) were flowering. Unable to survive much frost, camellias flower in earliest spring. They have been cultivated in Japan for many centuries. Some species are native to Japan, others were brought from the Asian mainland hundreds of years ago. Although the Japanese generally love them, reportedly they made samurai uncomfortable because when the flowers wilt, they fall as whole flowerheads onto the ground, reminding the samurai of the decapitated heads of fallen samurai warriors.

By April, central Japan was full of flowers. Flowering cherries, plums, apples, crabapples...all rose family (Rosaceae), each making a big flowering display in spring. They've been cultivated a long time and so there were all the colors from white to deep purple, singles and doubles. We missed the peak of great plantings all in wild bloom, but found plenty of solitary trees to admire. 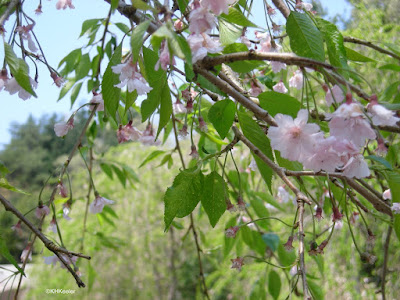 In April, we saw were diverse irises. The native irises of Japan are different from those of Europe or North America (blog post on iris) and so I saw unfamiliar forms and shapes. The Japanese have been growing and breeding iris for more than 1000 years, independent of the rest of the world, so there is wonderful diversity.

Iris plants are beloved of the Japanese and unimportant cultivated plants in China. Their role in Japan is sometimes attributed to the sharply pointed leaves, reminding the art-loving, warlike samurai of swords. But also, the poet Narihira (825-889 CE) and his companions. traveling in rural Japan encountered a bridge over a wet area filled with flowering purple iris (kakitsubata, Iris laevigata, rabbit-ear iris). It reminded them of their far-away home in Kyoto. They composed a poem, in which each line began with a syllable of the word iris, kakitsubata (ha = ba in old Japanese). The poem became a classic and for more than a millennium painters and other artists have alluded to it in their art. Of course it has inspired generations of gardeners to  create puple iris patches.  Here it is with translation from Four Season in Japan (link)

"I left behind my wife in the city of Kyoto,
and now have come a long way.  Like comfortable clothes,
we have come to be comfortable with one another.
The feeling of loneliness comes home to me." 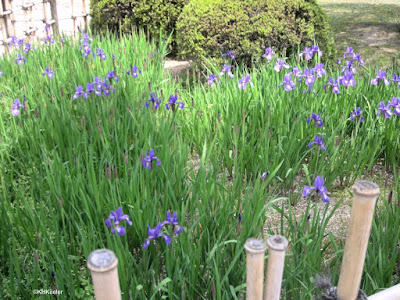 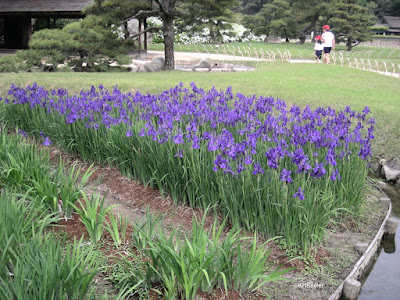 We visited Tokyo and Kyoto in October 2012. The growing season was ending, and the trees were turning color. Of course gardeners planted with that in mind

And some of the beauty was wholly unintentional:

Once again, my photos make a densely-populated place seem almost empty of people. Of course Japan, especially the area around Tokyo and Kyoto, is bustling with human activity and there is much to see and enjoy in that: 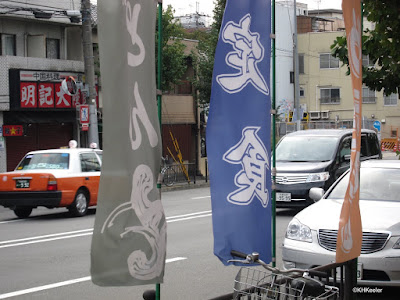 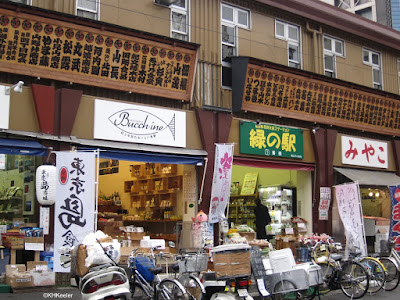 Amid all that, there are flowers, gardens and green corners to discover! View of Hama Rikyu Gardens from high in a nearby building

Posted by A Wandering Botanist at 2:16 PM