The big prickly pear cactus had white deposits. So unsightly! And yet, the source of fortunes! 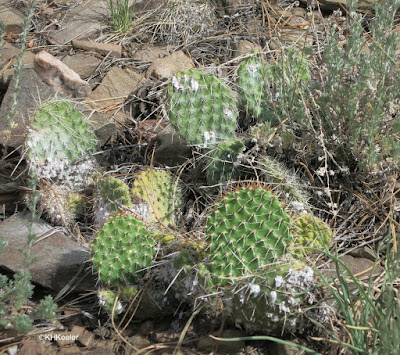 Humans love red, but red dyes are few in the natural world. Europe from prehistoric times raised madder (Isatis tinctoria) which makes a strong brick red. But though they loved madder, Europeans liked colors that were almost purple even better, and those were harder to produce. The Phoenecians, Greeks and Romans made them from small molluscs (murex, link  link) gathered in the Mediterranean. That was the source of the rare royal purple of Roman togas, a red-purple. The snails were over-harvested and when Constantinople fell to the Turks in 1453, the technology was lost until the 19th century.

Red-purples were also produced by scale insects. These became the most prized dyes after murex purples were lost. For medieval and Renaissance Europe, there were four main sources of insect-based red dye, kermes (Kermes vermilio) from scale insects which lived on the kermes oak (Quercus coccifera) around the Mediterranean, Polish red (Porphyrophora polonica), the insects harvested from the roots of knawel (Scleranthus perennis, carnation family Caryophyllaceae photo) in central Europe, Armenian red (Porphyrophora hamelii) from scale insects that parasitized the roots of two grasses of dry steppes in central Asia, and lac (Kerria spp.), a scale insect that fed on trees and shrubs from India to southern China. Only female scale insects produce dye and the quantity is greatest when the female is swollen with unlaid eggs. Consequently dye harvest was a very brief period, even in subtropical areas where the insects had two generations a year. Expensive to collect and process, the demand for these dyes far exceeded the supply.

Until the discovery of analine (synthetic) dyes, the dye critically affected the price of cloth. In 15th century Florence, to have a pound of silk dyed with blue or yellow cost less than 15 soldi, while red from kermes cost 40 soldi. In England, that same century, a master mason earned less than 9 shillings a month. Good blue wool cost 5 shillings a yard, the cheapest red cloth 9 shillings 5 pence a yard and the best reds more than twice as much as cheap reds. (Consider what you earn in two months as the cost of a yard of cloth.)

Thus, when Spaniards in Mexico and Guatemala found the natives using a bright red insect dye, it instantly caught their attention. This was cochineal, Dactylopius coccus, a scale insect that infects prickly pear cacti (Opuntia). The insect lived in unsightly white areas it created on the big cactus pads (properly, cladodes). The dye was harvested from females full of eggs. Native Americans had been raising cochineal for many centuries. The domesticated insects were bigger than wild ones and the prickly pear cacti they grew less spiny than wild ones.
Cochineal was immediately sent back to Europe. Dried, the insects made great red dye, just like freshly crushed ones. Dried insects are light, compact and easy to transport. And they contain about 20% carminic acid, an extremely high concentration for a natural dye, making it a stronger dye than the traditional madder.

It was a hit! Europe couldn’t get enough of it.

Europeans didn’t know what the cochineal was. You opened the box and there were round reddish dots, very light-weight. They thought they were seeds and called them grana.

A bowl of cochineal to be used as a dye. If I told you they were seeds, would you believe me?

Here, look at one close up: 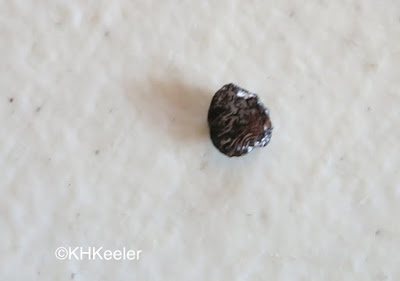 Of course the Spaniards asked the conquered Indians for all the cochineal they had…and more.
Despite their best efforts, the supply was variable. Severe storms periodically wiped out most of the bugs. Disease and other predators attacked both the insects and the cacti.

Cochineal was worth its weight in gold. Spain had a monopoly and protected it carefully. The English pirates preying on the Spanish galleons coming from America were always delighted to find cochineal in the cargo.

In the 1770s Frenchman Nicholas-Joseph Thierry de Menonville went to Mexico with the goal of stealing cochineal. He slipped into Spanish territory under false pretenses, lied to Spanish authorities, and traveled deep into the countryside where he talked to the Indians, learned the secrets, and carried live insects and Opuntia cladodes away with him. Again avoiding the authorities, he hopped a ship to what is now Haiti and started a cochineal plantation there. Alas, he died soon after and his cochineal garden soon perished as well. However by the early 1800s cochineal was being produced in French, British and Dutch colonies in the dry tropics.

Beginning in the 1850's, however, aniline dyes revolutionized cloth dyeing. Aniline (synthetic) dyes were cheap to synthesize and produced brilliant, color-fast colors. (link) Bright colored clothing was quickly democratized: you didn't have to be wealthy to wear strong reds. It must have been like the change in printing that has occurred in my lifetime. When I was a young adult, newspapers were black-and-white, with only the Sunday funnies painstakingly printed in multiple colors. Today we don't even think about the fact that the pictures throughout the newspaper are colored, or that the home printer makes mulit-colored copies. That's what the analine dyes did for colored cloth.

Consequently, the bottom dropped out of the cochineal market and for a time cochineal dye was reduced to a historical curiousity. In recent years, however, safety concerns have eliminated some of the red food dyes, for example red dye #2. (link). Consequently some manufacturers have turned to cochineal. It is organic and nontoxic, as well as very bright, making it a safe, effective food dye, although not everyone wants to consume even trace amounts of crushed insects.

It is a wonderful dye. Very bright and colorfast. Buying it for home dyeing, it is expensive by weight compared to, for example, madder, but the dye goes much farther. The price of cochineal remains quite variable as each year’s crop is still subject to the vagarities of climate on both the plant and the insect.

Prickly pear cacti, Opuntia species, grow from South America north through Central America, and North America into Canada. There are about 200 species. Cochineal, Dactylopius, has nine wild species, most much smaller than the domesticated D. coccus. Cochineal species are widely used as predators to control prickly pear cacti, so obviously they can seriously damage the cactus.

Wild cochineals are found on many species of prickly pear. Between the number of different Opuntia species and the difficulty of determining the exact species of the insect, the distribution of cochineal species on Opuntia species is still incompletely understood. However, if there are prickly pear cacti growing wild in the fields near you, look for cochineal.

There are two species of Opuntia where I live and I've seen cochineal on only one of them, Opuntia polyacantha. Sheron Buchele Rowland and I gathered cochineal from the cacti on her property, in the foothills of the Rockies west of Loveland, Colorado. The insects were tiny. We couldn't gather much dye and in fact felt sorry to kill the insects just to try the dye, so we quit after convincing ourselves it really was cochineal, living north of Denver. The red dye stained our fingers very brightly indeed.

As the dyed cloth and thread photos above indicate, cochineal is a wonderful dye. The color can be made more purply by changing the pH, though to a deep purple requires dipping it into an indigo bath. If you work with natural dyes and have never tried cochineal, I highly recommend it. The bright colors as they come out of the dye bath are such a thrill.

Posted by A Wandering Botanist at 6:20 PM