Is this plant cute? 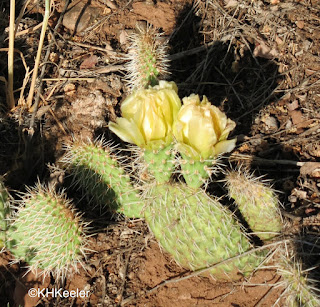 "Of course it is," my prickly pear cactus replied. "We cacti grow well in pots, have beautiful flowers, and survive if the dumb human forgets to provide water for weeks. We're awesome!"

"Ah," I replied cautiously, "then how come some people hate you, clearing you out of their pastures?"


"Can we help it if they get stabbed by walking too close to our spines?" it responded.

"Look, we cacti are from deserts. We have handsome spines because those of our ancestors that had only a few soft spines were quickly eaten by hungry animals. Deserts breed tough plants. Ones that can defend themselves.

"And our life isn't easy, not like it is for those prickly tropical vines. If they lose a branch, they grow it back in a week. Not us! We don't have the water to grow rapidly. We need fearsome spines to send hungry animals off to bite someone else. When we lose a stem, alas! we may not be able to regrow for months and months. A spine is a fine beautiful thing!"

"Do you think it is just familiarity that makes people less impressed by cacti?" I asked.

"Well, perhaps you Americans have lost respect. We cacti are almost all native Americans.  (map)

"Naturally, discovering the cacti was one of the highlights when Europeans bumped into the Americas.
"And being humans, they couldn't resist carrying us around the world. Europeans love us! I have many relatives now living on window sills in chilly places like London and Stockholm.

"Better still, they took us with them to warm places. Big cacti grow wild in Italy and Spain for example.
"And Hawaii. Hawaii is a lovely place for cacti and we're doing well there, I am told."
"But not all places welcome introduced cacti. You have spines and livestock won't eat you."

"Alas, that's true. We didn't bring ourselves to places like Australia, but when we self-reliantly reproduced, they took it badly. They attacked on us, just at the point when there were vast fields filled with cacti where none had been before.

"In fact, the Australians sent scientists to Mexico and Central America to find things that EAT cacti. Horrid!
"One of the nicest things that relatives growing in Europe and Asia reported was that few insects in those distant places eat them. Spines keep the mammals off and in those strange lands no bugs, fungi or bacteria would sneak in to destroy our beautiful cladodes.

"It wasn't difficult for the wretched Australian scientists to find our natural enemies--success such as ours of course attracts predators and parasites. They brought that horrid moth, Cactoblastus, and those disgusting scale insects, cochineal, to Australia. The result was awful! Cacti died by the hundreds and then thousands."
"Biological control of the prickly pear cacti in Australia is one of the success stories for reducing an invasive species," I pointed out, as mildly as I could.

The cactus harrumphed. "WE don't see it that way. If you rip us out of the ground and drag us half way around the world, is it fair to then persecute us if we grow well in the new lands?"

After a pause, the prickly pear added, "You managing humans shouldn't be too self-congratulatory, though. While bringing in our enemies reduced the number of prickly pears growing in Australia, some survived. AND are harder for those vicious insects to find--so we have not been eliminated. We still add to the biodiversity of Australia. And of many places across the previously-cactus-less world (see map link).

While I was thinking about this, the cactus suddenly added, "But wait, we're not enemies! Cacti are helpful plants. We produce nutritious and very tasty fruit: wonderful jams and beverages are made from them. American humans have known this for thousands of years. Our cladodes are nutritious too--which is why so many animals try to eat us--tho we'd PREFER you ate the fruits and then discarded the seeds, helping us disperse. Today, we offer an incredibly hardy crop for dry areas around the world. (link1, link2, link3) Persecuting us is SO short-sighted.

"Even before humans became very numerous, not only did we feed wildlife, we housed them. Birds nest on us -- or in us in the case of cactus wrens (link).
"And aren't you humans wild about helping pollinators? We have beautiful flowers that feed bats and hummingbirds, bees and butterflies...

"Look here, in the photo: the pollinator of this flower is a bat, but we share our nectar and pollen with honey bees too!
"There's so much to admire about cacti," it purred. "No one is better suited to desert life. We're diverse, beautiful, and ever so tough! Don't get stuck just noticing our spines."

Notes: There are 1,866 species of cacti, all but one native to the Americas.
Cladode is the proper name for the large pads that make up most of a cactus. They are modified photosynthetic stems, not leaves.
Cacti is the Latin-style plural of cactus, a little easier to say than cactuses, tho' both are ok.

Posted by A Wandering Botanist at 2:10 PM