Rosemary is for remembrance.

That's one of the few commonly-remembered plant meanings.

The "Language of Flowers" was a Victorian creation, putting meanings onto plants, so a bud or bouquet could convey a very specific message. There seem to have been several systems, which meant you could misunderstand the message. But, using Kate Greenaway's Language of Flowers, one of the still-available lists (link), a white rose would say "I'm worthy of you, " while receiving white and red roses together meant "unity." In Greenaway's system, rosemary meant "remembrance".

But rosemary's role in remembrance goes back way before the Victorian era (1837-1901). In both ancient Greece and Rome, rosemary was worn by couples at weddings and placed in the hands of the dead. Both of these evoke enduring affection and remembering. Furthermore Greek students reportedly wore rosemary in their hair for examinations, to better remember the information.


Rosemary's Greek name, libanotis, means frankincense, because rosemary was thought to smell like the more exotic frankincense. The legend says that when a pious young priest, Libanus, was assassinated, his blood fell on the rosemary. Thereafter the rosemary took on the aroma of incense in memory of Libanus.
Rosemary is an evergreen shrub from the shores of the Mediterranean in Europe. It has highly aromatic narrow leaves that look something like short pine needles. It is in the mint family (Lamiaceae) with mint-like blue-purple, and occasionally pink or white, flowers. It is not particularly frost-tolerant so in northern Europe and other cool regions it doesn't grow into a shrub, being killed back to the ground during the winter.

The plant's strong pleasant fragrance has made it attractive to humans since prehistoric times. The scientific name, Rosmarinus officinalis, comes from the name used by the Romans, ros marinus, ros being "dew" and marinus "of the sea." Pliny (AD 23-79) commented that the best, most aromatic, rosemary was found by the sea. The species epithet, officinalis, means "of the workshop (officina)" referring to the workshop of the pharmacist. There may be other species of Rosmarinus (three in fact) but this is the one you'd buy for herbal medicine.

Today rosemary is a spice or an attractive garden plant. Over most of European history, rosemary was more important as medicinal and sacred or magical plant than as a food.

Pliny, writing in ancient Rome, listed many medicinal uses of rosemary, from healing wounds and hemorrhoids to curing jaundice and sharpening eyesight. It eased sprains, lightened freckles and, taken in honey, treated a cough, among other applications. Most of those uses continued through the next thousand years. Culpeper, in the 1600s, wrote that it helped rheums of the eyes and cold diseases of the head, such as giddiness, dizziness or dullness, treated pains of the gums and teeth, comforted the stomach, aided memory, and a whole page more (culpeper online). Today rosemary is considered effective for blood pressure problems, dyspeptic complaints, loss of appetite and rheumatism (see PDR for Herbal Medicine, webmd. U.MarylandMedicine).

By the Middle Ages, rosemary was used as a spice as well for diverse household tasks. It flavored meats, sauces and wine. Garlands of rosemary decked the boar's head at the Christmas feast. Rosemary was addded to water for hand washing. Whole or powdered, it was stored with clothes to repel moths.

In addition to these recognizeable uses, rosemary flowers, dried, pulverized, bound in a tightly-woven linen cloth tied to the right arm, made the bearer "light and merry." Similarly, the leaves under the head of the bed prevented evil dreams. Best of all, a box made of rosemary wood, regularly sniffed, preserved one's youth. (Anonymous, 1546)

Rosemary came to be strongly associated with the Virgin Mary, the name transposed to be the "rose of Mary." Native in the Holy Land, rosemary flowers reportedly were white until the Virgin Mary stopped to do laundry during her flight and threw her blue cloak over a rosemary bush to dry. (The other version I saw of the story said she "threw her cloak over the plant," making it sound like she abandoned it. Doing laundry is homey but doesn't discard a good blue cloak.) Likewise, medieval people reported that rosemary never grew taller than the number of years of Jesus's life and after the allotted 33 would spread horizontally rather than growing taller. In medieval lore rosemary grew only in the gardens of the righteous. 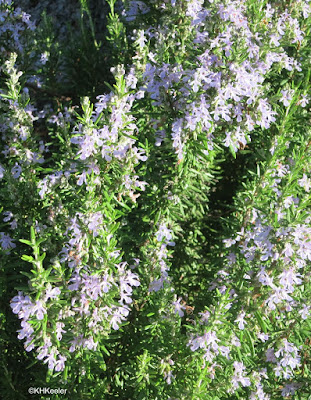 With the link to the Virign Mary came a reputation for enhancing fidelity, fertility and happiness in marriage. Many European traditions insisted on establishing that the bride was a virgin, with predictable tensions about best to make this point. One solution was for guests of the bride in English weddings to hold a sprig of rosemary in their right hands and raise them as the bride entered, signalling to all that she was a virgin. As a charm for fertility and happiness, brides often wore or carried rosemary. In 1540 when Henry VIII of England married Anne of Cleves, many, many pots of rosemary were carefully grown in London in order to have ample fresh rosemary for the winter wedding.

Fitting the theme of fidelity, fertility and happiness, in Tudor England, rosemary was considered an aphrodesiac, when either smelled or drunk as distilled rosemary water. Women were advised to carry rosemary, place some in their beds or baths to be "lusty, lively and joyful."

At the same time, rosemary was essential in Christian funerals and burials. Its mystical powers were so strong that they would protect the dead, the living and the church from evil. Rosemary was given to and carried by mourners going to the funeral, who would then place it on the coffin in the grave. 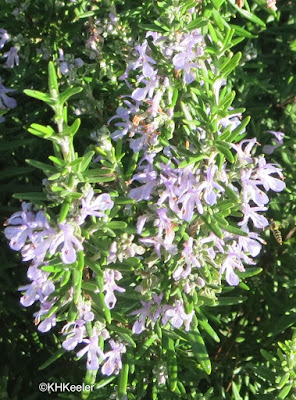 Just as it protected from evil, rosemary or the scent of rosemary protected people from disease and until quite recently it was widely carried for that reason.

In the late 20th century, when the Oxford Dictionary of Plant Lore authors sought beliefs about rosemary, they were told it was the plant of friendship and that people grew rosemary in the garden so that they would never lack friends.

As a protection from evil and disease, as enhancing friendship and fidelity, and symbolizing remembrance, rosemary has been integral in European culture for at least two thousand years. Today
rosemary is a lovely culinary herb and garden plant, and one of many plants used as a  Christmas tree.
Don't just walk by the rosemary. Make rosemary for remembrance your own tradition. Have people or ideas that you think of whenever you see or smell rosemary...like generations of people before us.

Posted by A Wandering Botanist at 1:26 PM