Norway isn't just fjords. It has many miles of scenic coastline and islands, as in the video.

But also beautiful fjords (below). A fjord is a long deep canyon filled with seawater. Most were carved by glaciers. Fjords are rare around the world, the famous ones are in found in Norway, New Zealand, Chile, Canada, Alaska and Greenland. 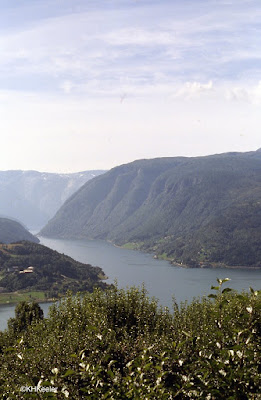 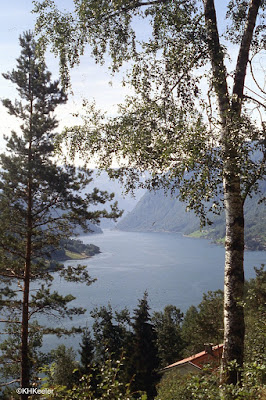 Norway also has lovely lakes.
As the map shows, the country is long and narrow, lying between the Scandinavian Mountains and the Norwegian Sea, with deep fjords. Historically, it was far easier to sail from one city to the next than to go there overland, though today there are good roads and fast trains. Notice that there's only a little bit of land that is nearly at sea level (green, yellow), mostly it is much more mountainous.

I visited in 1987 and again in 2014. In 1987 we found a sleepy Scandinavian country, very beautiful, welcoming to tourists and with lots of English-speakers since it was a common holiday destination from Great Britain.
I returned in 2014 and found it still gorgeous and welcoming, but now one of the wealthiest countries in the world.
During my absence, oil deposits were found in Norwegian waters and the oil mined. Norway has spent some of that oil income on its people but also invested large portions of it so that future generations share the wealth. That's an amazing piece of money management for a government--more frequently local politicians making short-sighted decisions due to immediate political pressures. My guess is it will not be easy to keep the principle intact for years to come. But its been a remarkable, well-managed transition to wealth.

One museum that wasn't there in 1987 is the Petroleum Museum in Stavanger (link). Its beautiful displays tell of prospecting and drilling for oil, and the perils in both of those. My recent trips to the North Atlantic have included the Faroe Islands and the Netherlands, both places hoping to tap oil-rich deposits off their coasts, imitating Norway. The Petroleum Museum made it clear that finding and removing oil deep under cold, stormy seas requires luck, patient investors, alert government oversight, brave construction workers and much more. The Museum also discussed the chemistry and physics of oil--I'd need another visit to get beyond a superficial understanding of that.
It was also  mindboggling to imagine the great tropical forests that once stood where the Norwegian Sea is today--oil is a fossil fuel that at one time was live plants, after all.

Of course, Norwegians have been risking the cold stormy Atlantic for hundreds of years. One must-visit museum in Norway is the Norwegian Ship Museum in Oslo (link). There are housed fabulous Viking-era ships. (I was taught that viking is a verb, for sailing away to raid and trade during the summer, and not a noun so that one says Viking-era not Vikings, but the online dictionaries give the use I was taught to avoid, that Viking is a noun for Scandinavian raiders of the 8th-11th centuries, so perhaps I learned it wrong.)

As my photo suggests, much of the Ship Museum is a big empty space: the ships say it all. 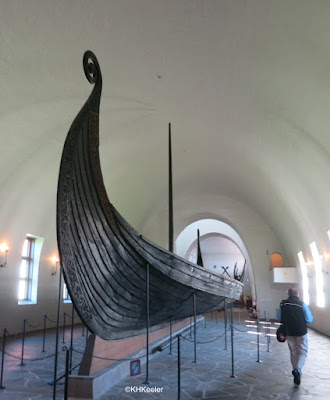 There aren't just the ships to marvel at but also the artifacts found with them. The Osberg Ship was overturned to form a burial mound for a high-ranking woman. Her grave goods were fascinating: pots and bowls, jewelry, tablets for weaving...  She had fine jewelry and metallic threads woven into her clothing. But also they buried her with household goods for the afterlife. Weaving we imagine as a hobby because for us it is, but in the 9th century, the household would have woven most of its own ordinary clothing. Then there's the quern. My photo is too poor to include but along with wooden bowls and spoons is a quern (see example), a stone for grinding grain into flour. Its been most of 1,000 years since mills took over grinding grain, so we have long since forgotten that in times like the those of the woman of the Osberg ship, somebody was continuously grinding grain between two stones for there to be bread or porridge. And the bucket. We have plumbing, but their household water had to be hauled from the well or stream in buckets. The grave goods displayed included many reminders how far technology has brought us since the 834, the date of the Osberg ship burial.

Farther up the coast, in Bergen, the buildings of the Hanseatic League have been preserved. The Hanseatic League was a confederation of merchant guilds from German cities that between about 1400 and 1600 controlled trade in the northern Atlantic. They managed trade, critical to prosperity across coastal northern Europe to make it safer and more predictable, always benefitting themselves and sometimes outraging the local people. For a decades they were the most powerful force in the region. (link)

The Hanseatic League had an enclave along the docks in Bergen, called Bryggen, where League law superceded Norwegian law, similar to embassies around the world today. As you might expect, despite the prosperous trade the Hansa brought, where the two legal systems differed, there were ongoing conflicts. The wooden buildings shown below are in Bryggen, still in use. 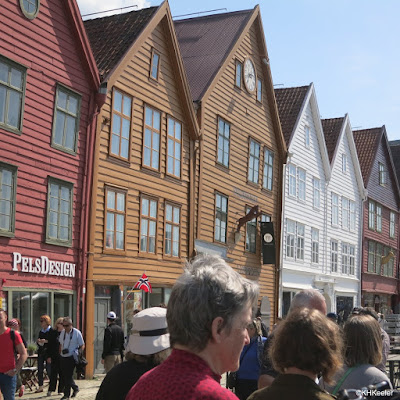 In the photo below you can see a hook hanging in the sky. Medieval port buildings backed up to a canal so that ships could sail right up to them. With the crane they could hoist heavy freight into or out of the warehouse. As with barns in the U.S. midwest, the windows on the second floor opened very wide to handle bulky items. Storing merchandise on the ground floor was more accessible to thieves, vermin and flood. Modern use has filled in many historic canals for truck access and we don't readily appreciate the clever arrangements made for moving heavy loads when all power was provided by humans or horses and oxen. The design of these houses was full of interesting historical details. 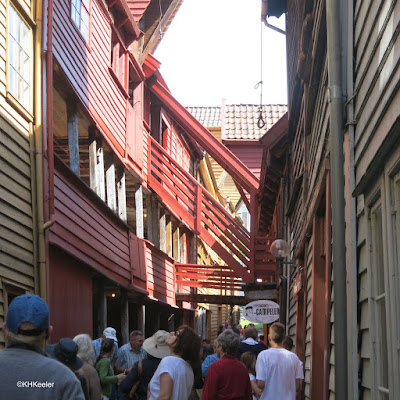 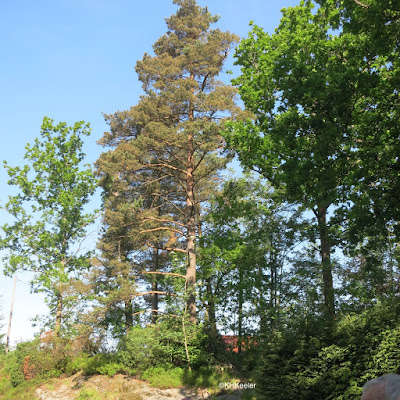 As the Bryggen photos suggest, much of their historic building was with wood. Below is a "stave church" the earliest design for Christian churches in Norway. They burned easily and most of the still in existence have been painstakingly rebuilt at least once. 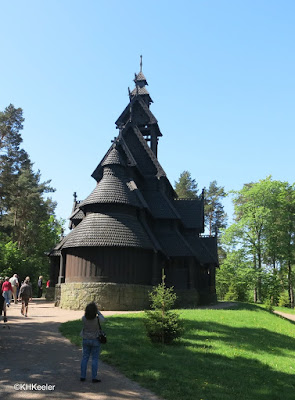 Norway has been collecting its historic buildings in the Norwegian Folk Museum in Oslo. When development threatens an old building, it can be relocated to the Folk Museum. I had read about, more than seen, houses with sod roofs, so I was fascinated. In the moist conditions of Norway, the grass on the roof requires little care. The roofs were solid enough that farm animals could graze there. Most were not willing to jump off that height, so the roof was a safely enclosed pasture. Alas, I didn't see any cows on the roofs at the Folk Museum. 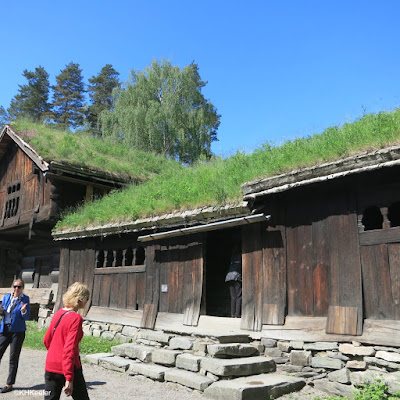 Not surprisingly, in a new place I see human works first and plants second. Looking beyond the fascinating history, Norway was full of interesting plants. For example, forests are part of all my scenic shots at the top of this post, even though one looks chiefly at the water.

The cities had wonderful flowerbeds planted to celebrate spring 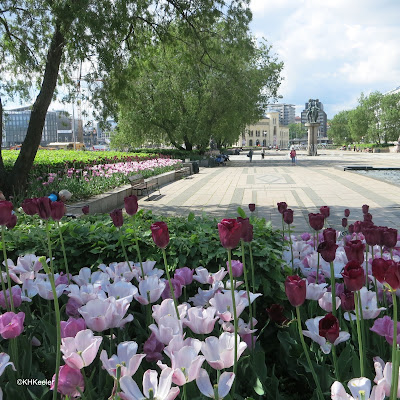 I was there in late May 2014. In the shade of trees, in neglected spots along roads, were spring wildflowers like these wild geraniums, probably Geranium robertianum, called herb robert. 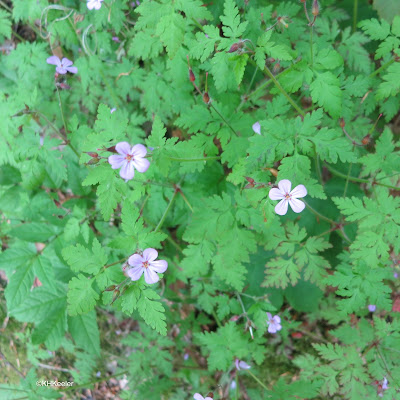 Here poking out of the moss, a wild poppy. (The closest I can identify it with the books I have is as Papaver radicatum, arctic poppy, but northern Europe has several native yellow poppies that seem very similar to me.) 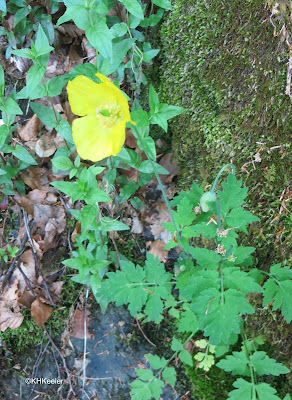 And another tree, making the lake look great and vice versa.

Posted by A Wandering Botanist at 1:06 PM