Plant Story--Daylilies, From Asia, Beautiful and Not Lilies 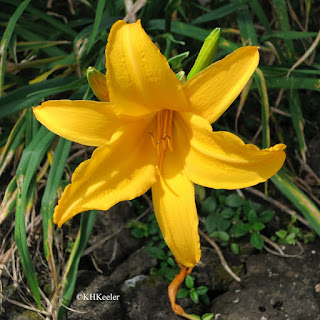 Everyone always has grown daylilies and their story is well-known. It seemed. When I looked carefully, I totally rewrote this blog post.

Daylilies have been in U.S. gardens since the 1600s. It is commonly reported that both Dioscorides and Pliny in ancient Rome (1st century AD) wrote about them, but careful analysis has shown they were describing a lily, not a daylily. Daylilies came to the West from China, after 1500.


Daylilies are native to China, Japan and neighboring eastern Asia, where they have been cultivated for more than 4000 years. Their scientific name, Hemerocallis, is from the Greek hemeros, a day, and kallos beauty, because the flowers are only open a single day. There were originally about 19 species, today hybrids confuse that. Tawny daylilies, the common orangy ones, are generally classified as Hemerocallis fulva and yellow ones as H. lilioasphodelus (formerly H. flava). That's just the beginning of the story since they have been hybridized with other Hemerocallis species and selected for new shapes and colors for hundreds of years: the earliest record from China is from about 2697 BCE (see Chinese Hemerocallis species and varieties link). The result is that identifying a plant to one particular species can be very difficult. Take a look at the colors and forms listed by the American Hemerocallis Society (link  and its FAQ) 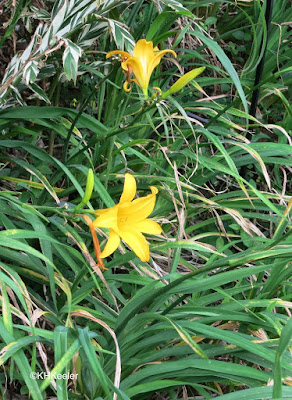 Daylilies are believed to have been introduced to Europe from the Ottoman Empire (1299-1922), probably in the 1500s. An early English report appeared in Gerard's Herball (1633). Gerard gave a good detailed description, including that the flowers lasted only a day, said the English name was daylily, and that it was more like an asphodel than a lily (asphodel pictures). He further commented that the tawny daylily rarely produced seed and while it was grown in the gardens of herbalists and lovers of fine plants, it did not grow wild in England. Other northern European herbalists of the time (Fuchs, Banks, Turner, Culpeper) did not mention daylilies. My English folklore books do not refer to daylilies either.

The daylilies in Europe and North America were pretty basic until China was opened to the West after the Second Opium War. Then, all sorts of daylily varieties were brought to the United States and Europe. Today there are thousands of varieties. In the 20th century, American breeders embraced daylilies and created hundreds of additional combinations and colors. Some varieties are 50 years old and others likely 1,000 years old. See some of the diversity link.

Although we call them lilies, daylilies are in the plant family Asphodelaceae. (Asphodelaceae photos: link ). DNA studies are showing that lily-like plants came from a number of distinctly different lineages and so, as evidence accumulates, they have been splitting the once-huge lily family into new, smaller families. Daylilies are more closely related to asparagus and agave (asparagus family, Asparagaceae) than to true lilies (lily family, Liliaceae), despite the common name. Members of the asphodel family are native all over the world except North America and are particularly numerous in southeast Asia and Australia. 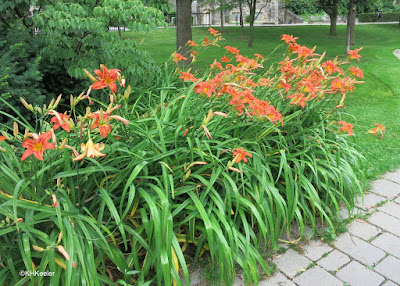 The difference from lilies is reassuring because as a rule, true lilies are poisonous or at least inedible. Avoid eating any part of any true lily. People write that the daylily is "one of very few edible lilies." The current classification clarifies that: daylilies are not lilies. You can eat daylilies, never eat lilies.

There's a lot of confusion online, for example listing onions and asparagus in the lily family. That's the old classification: they too are in new families. So my rule of not eating lilies reflects the current classification, what we call Liliaceae sensu strictu, the narrowest definition of the lily family. The traditional Liliaceae ("Liliaceae sensu latu," broad sense) of even a decade ago was a mishmash with both really toxic and edible plants. The classification I use is online on the Angiosperm Phylogeny Website, website.
Superficially daylilies look a lot like lilies. But careful observation finds numerous differences. Daylilies grow from roots and are easily divided. Lilies grow from bulbs and subdivide only by separating bulbs. Daylily flowers last only one day while lily flowers are open for several days. That's why daylilies rarely appear in commercial bouquets and lilies such as the Easter lily, Lilium album, are used there. In addition, daylilies send up flowering stalks that lack leaves, coming from the base of the clump of leaves, while lilies usually send up a flowering stalk with leaves growing along it (this lily photo from fiftyflowers.com shows it link). (See also The Spruce, American Meadows, dayliliesinau for telling daylilies from lilies).

The Chinese prized the tawny daylily as food but also praised its medicinal qualities. Looking up whether you can eat daylilies online gives conflicting information. I'll assemble that in an upcoming post: it got to be a lot. But minimally, the tawny daylily was what the Chinese ate (and eat), not hybrids and not other species.
Daylilies have escaped from cultivation (naturalized) across most of North America (USDA map link) and many other places in the world, so in addition to planting them in your back yard, likely you can gather them from wild areas near you. Open daylily flowers are disappointing as cut flowers, since they only last a day, but a bouquet of buds will be beautiful for most of a week, despite dropping old flowers on the table. In North America, the tawny daylilies have spread from rhizomes, rather than seeding into new areas, because they are sterile or nearly so. Spreading by cloning means generally plants occur in good sized groups with abundant flowers, making it easy to gather a bouquet. It also suggests that someone planted the first daylily in that clump. Consequently, from your patch of "wild" daylilies, look for signs that there was once a house or garden close by.
The plant is mucilaginous and that goo has historically used in treating burns. Dayliles do not appear in the modern herbal works in my library, for example the Physician's Desk Reference for Herbal Medicines, however, so their medicinal power is apparently not very great.

A very old Chinese belief was that a woman who wore daylily flowers, in this case a smaller orange Hemerocallis minor, a plant from northeast Asia cultivated in China from ancient times, in her girdle (belt) while pregnant would give birth to a boy. 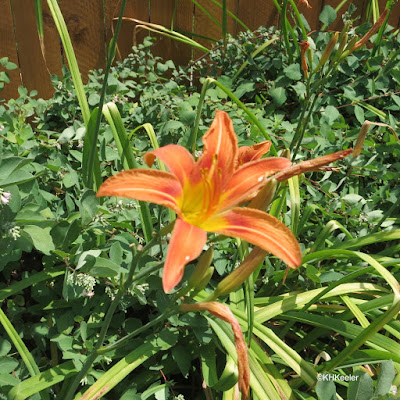 In ancient Chinese pharmacopeias, the tawny daylily was called the "forgetting sadness herb," xuāncăo. Consumed, it let people forget their sorrows and eased pain. Leaves, roots and flower buds are eaten in Asia. The reports I can find describing the experience suggest that, in quantity, new leaves, roots and buds can affect the mind, relieving anxiety. I myself felt no effect eating a few cooked buds. As a consequence of its relaxing powers, in China, daylilies have appeared for centuries embroidered or drawn on pillows, invoking the peace from daylilies at bedtime.

Comment that I couldn't fit in: Although reliable sources told me xuan meant mother, I looked online and in my Chinese-English dictionary for the character and proper Pinyin (with accent marks) of xuan meaning mother and couldn't find it. The Yunnan Herbal page suggests that the "forgetting sorrows" function was important to mothers anxious about their children. So perhaps the plant was long associated with and honored mothers but xuan does not mean "mother" except in the sense that Chinese said "xuāncăo is for mothers".  (căo means herb or plant).  Regardless of the language details, the daylily is a Mother's Day plant from China.

Posted by A Wandering Botanist at 1:06 PM