What Happened to Rosemary? 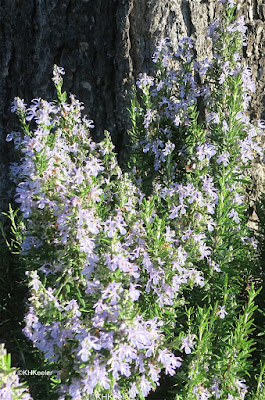 Rosemary is a sun-loving plant of the rocky areas along the Mediterranean Sea, from the south of Spain into the Middle East. Her leaves are long and fragrant, her flowers a beautiful purple. Long ago humans found her scent calming and the oils in her leaves a fine flavoring. She had two close relatives, sisters you might say, but they grew only in local areas near her, while rosemary herself was carried around the world by humans. (See previous blog about rosemary link). 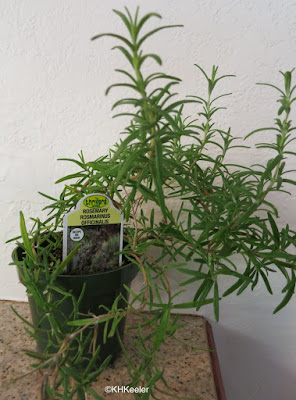 But one day, in 2015, botanists sent rosemary's DNA off to the botanical equivalent AncestryDNA and when the results came back, they were shocking.

Rosemary has dozens and dozens of sisters and brothers, most of them going by the name Salvia (sage). Salvia is a world-wide genus of over 1,000 species.
The pragmatic botanists wrote, "rosemary should be classified with the sages, with the name Salvia rosmarinus, not Rosmarinus officinalis."

This shocked lots of people--just like finding unknown sisters and cousins shocks people who get DNA tests.

To restate this more botanically: in a study published in 2017 (citation below) Bryan Drew and his coauthors compared DNA sequences in plants then classified in the genera Salvia, Rosmarinus, Dorystaechas, Meriandra, Perovskia and Zhumeria. The DNA showed all were equally related. The authors proposed putting all the plants into a single genus, Salvia. They made the case carefully in the paper: either the plants should all be Salvia or Salvia must be broken into several genera because  it currently includes subgroups that cluster the way those five small named genera do. Breaking up Salvia would require new names for something over 700 plants. In contrast, by merging the five small genera into Salvia, a total of 15 species are being renamed. The other renamed species do not have much of a fan club, only rosemary's renaming has created a stir.

As is the scientific procedure, Drew and coauthors wrote out their data and their logic and published it. If readers are convinced, then they will follow the researchers' recommendations, in this case, calling rosemary Salvia rosmarinus. If they are not convinced, they can go on using the old name or, better, publish their objections, with data to support their view, and everyone can consider the pros and cons of the evidence offered.

Geeky Botanical Stuff:
For the curious, here is what this reclassification did to the three species previously in the genus Rosmarinus: Common rosemary retains the name rosmarinus, but now as the species epithet: Salvia rosmarinus. The old name Rosmarinus officinalis is lost. It becomes a synonym, "synonym"in botany being a name that has been superceded. Rosmarinus ceases to be a genus. For rosemary, "officinalis" (which means "of the shop," that is, the one the herbalist prescribed) is also lost in the reclassification. There are at least two reasons for that. First, because without using rosmarinus as the species epithet, the scientific name would give you no clue it is the plant with the common name rosemary--imagine it as Salvia laxiflorus, a name used for rosemary in 1863. Second there already is a Salvia officinalis, culinary sage. Drew and coauthors followed naming botanical naming rules as well: the name Salvia rosmarinus for rosemary was proposed in 1852 (!) so it has seniority over Salvia laxiflorus as a name for rosemary.

The other two species that were in the genus Rosmarinus, Rosmarinus tomentosus and R. eriocalyx will be harder to relate to rosemary in the future, since they became Salvia granatensis (because it grows primarily around Granada, Spain) and S. jordanii (commemorating the French botanist Claude Jordan (1814-1897) who described it in 1866). Conserving the species epithet is preferred but there already were both a Salvia tomentosa and Salvia eriocalyx. Classification within Salvia willl continue to show they are rosemaries: they cluster with rosemary within Salvia.
End Geeky Stuff

In the short term, this change has aroused dramatic reactions from the public -- As seen in these memes from the Facebook page Phytomemetics 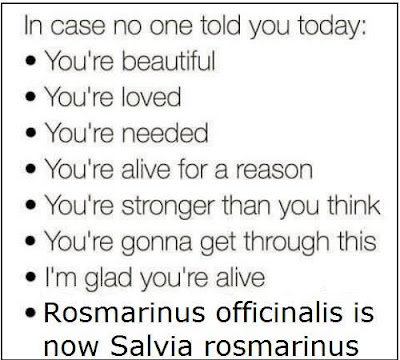 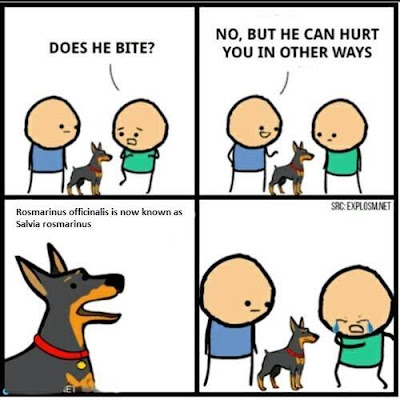 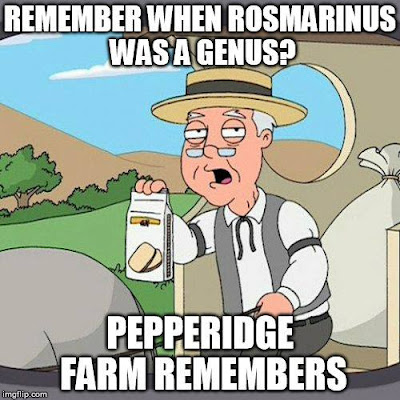 I read the paper and I am persuaded. I will hereafter give the scientific name of rosemary as Salvia rosmarinus.

If you had learned Rosmarinus officinalis and now need to learn Salvia rosmarinus for the same plant, that makes you part of progress in our society, same as learning to navigate with Siri or go through customs with your e-passport. Challenging on the first experience, but making things overall better.

References
Drew, B.T., J. Gonzalez-Gallegos, C.-L. Xiang, R. Kriebel, C. P.. Drummond, J. B. Walker and K. J. Sytsma. 2017. Salvia united: the greatest good for the greatest number. Taxon 66 (1): 133-145. (link-broken)
Note: 9/23/19  This links to the journal: Taxon. You can see the abstract but not the whole text. I think you can download the full paper from Researchgate.net if you join it (apparently free).
***Author K. J. Sytsma of U. Wisconsin has the full paper on his website (link) at least for now. Authors want readers and science is based on information exchange, so checking out authors' webpages will often get you an online copy. It is the publishers who don't want to give away the articles, which of course makes sense to their bottom line.

Commenting on this blog has also changed and I have not yet figured out how to comment; it used to be simple. Thank you Nina for pointing out the broken link. Everyone, please let me know if there are further glitches.

My thanks to meme-writers John Stewart and Jesse Vaillancourt.

Posted by A Wandering Botanist at 6:08 PM