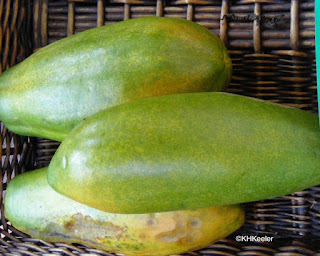 You see them sometimes in northern markets, green-orange fruits looking like small footballs. And I presume sometimes they taste pretty good.

But pretty good is not how they taste in Florida or Hawaii or Costa Rica. A really fresh papaya is a marvelous thing.


Papaya, Carica papaya, in the papaya family, Caricaceae, is a New World tropical fruit. In Europe they are often called pawpaws. (The pawpaw of the south central United States, Asimina triloba link is a totally different plant.)

There are six genera and 34 species in the small papaya family, five genera native to Central and South America, the other one African. Curiously, experts believe the group originated in Africa about 40 million years ago and arrived in South America by long distance dispersal--that is, carried or drifting across the widening Atlantic Ocean--about 35 million years ago. Once in the Americas, it diversified into plants now found in the Americas.

In the late Pleistocene, across the Americas, about 70 genera of mammals over 40 kg (bigger than a collie dog) went extinct (link link). There have to have been complex consequences of that extinction for the plant communities: surely some plants expanded in the absence of animals that ate their leaves and other plants became less common because their fruits were not carried to new locations by big fruit-eating animals. Connie Barlow, looking for examples of affected plants in The Ghosts of Evolution, pointed to papaya fruits. She thought a big mammal, for example a giant sloth or glyptodon, ate papaya fruits whole and deposited the small black seeds in their dung. Today in Africa, elephants eat introduced papayas that way. Otherwise, the big tasty fruits are puzzling: how were seeds spread?
Most of the 30 American species in the papaya family are trees or vines of the Andes mountains. The ancestors of the cultivated papaya, however, grew in the lowlands of Central America. It
was domesticated in Mexico, more than 7,000 years ago (before the Mayans).

As in many plants, humans stepped up to disperse the plant. Today papayas are found all over the world in the tropics, carried there in the 1500s by the Spanish.

Papayas are fast-growing tree-like herbs, meaning they grow to 20'-30' tall with a single trunk but never develop wood, the defining characteristic of a tree. They are killed by even light frosts. 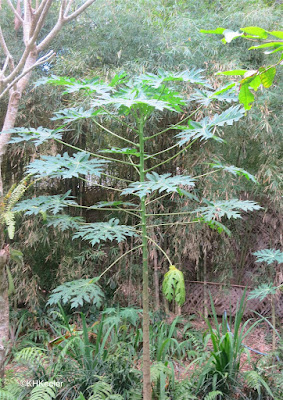 The big leaves are distinctive. 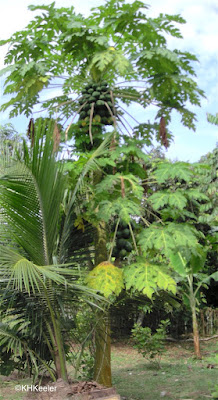 The flowers are white or cream-colored and emerge directly from the main trunk (without a stem).

Websites tell you papayas have three sexes. That makes me think of strange aliens in science fiction. It is not so marvelous. Most wild papayas were and are dioecious, with some plants producing pollen but no fruit ("male") and others making no pollen but having ovules and developing fruit ("female").  Pollen has to be carried from the one to the other for fruit production, so of course, half the trees, although essential for fruit production, produce no fruit. Those are two of the sexes. But most plant species, papayas included, occasionally produce mutants which reproduce differently. In this case, some mutants have both male and female functions in the same flower. (Perfect flowers is the technical botanical term for that; hermaphrodite is the term for "having both sexes on the same individual" and applies to animals as well). Agriculture has capitalized on this, growing more and better bisexual papaya plants, so that only a single papaya tree is required for fruit. (Photos of hermaphrodite papaya: link). I think it would be more accurate to say papayas have two breeding systems, dioecy and hermaphroditism. But if you are going to buy or grow papayas, being told "watch out, there are three sexes" is a useful warning.

The fruit (see picture at top; and this with seeds link) has soft tasty flesh inside a slightly tougher exterior.  Inside the tasty flesh are dozens of hard, round seeds. That description makes it a berry in botanical classification, a large berry, but so is a watermelon. (The botanical definition of berry doesn't match our common use of the word very well, read about berries on Live Science link. Botanical names for fruit structures: link link)

Papayas are rich in nutrients, proponents say "the most nutritious fruit" though the websites I found "only" put them in the top ten. They are rich in vitamins A, B and C, low in acids, a good source of fiber, potassium and iron, rich in antioxidants good for digestion and a moderate glycemic index with about 9% sugar.

In tropical countries there are many varieties of papaya, with red or yellow flesh as well as orange, and presumably with differences in flavor and texture. Look at this diversity: link. So even if you are reading this thinking, "oh yes, papaya, I know papaya,"  watch for a chance to try a variety you don't know! 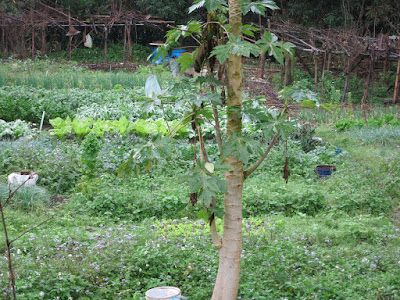 Papayas are also commercially grown as a source of papain. Papain is an enzyme (biological catalyst) found in the latex (milky sap) of papaya plants. It is a protease, able to break a protein into pieces. Consequently, it has been used as a meat tenderizer for millennia. Currently papain is used in a wide variety of applications, from meat tenderizer, to as a beer and pizza dough additive. It is used medically in surgery, by veterinarians deworming cattle, in the paper and adhesive industries and more (link).

In the plant the papain discourages plant-feeding insects. Moth larvae fed papaya leaves or papain in controlled experiments grew slower and died in much greater numbers than those fed diets identical except for the papain (See Konno et al. in References).


Posted by A Wandering Botanist at 3:02 PM