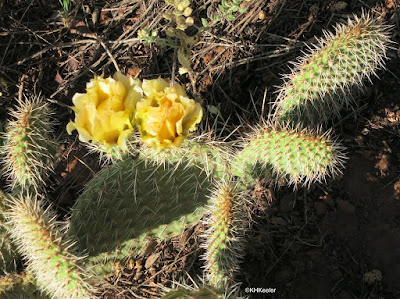 Cacti do not get a lot of appreciation. As a very visible, common cactus, that certainly applies to the prickly pears, Opuntia species. These plants are easily recognised, avoided and disliked.


The issue is not their beautiful flowers: 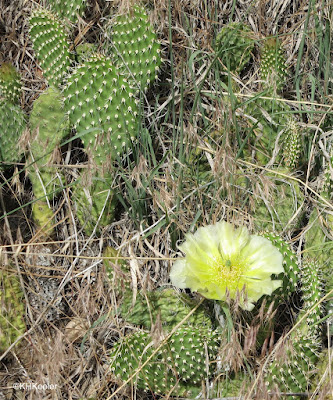 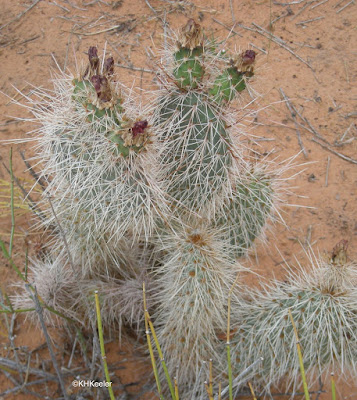 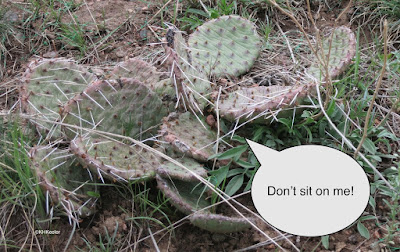 There are some 150 species of Opuntia, found from North America through South America.  The genus was formerly much larger but recent analysis has reclassified the chollas and others as other genera, with generic names such as Cylindropuntia and Cumulopuntia. The name Opuntia was perhaps based on a town in Greece where a cactus-like plant grew. Since no cacti are native to Greece, the botanist who named it, Miller, simply found a Greek word to use.

The name prickly pear refers to the shape of the segments (cladodes properly, also called pads). Prickly pears are called nopal (plural nopales) in Spanish, especially the really big species of Mexico. You can hear them called nopales in the southwestern United States.

The prickly pears are, like other cacti, specialized for surviving dry conditions. They have several adaptations for drought-resistance.

One adaptation to drought is internal. Photosynthesis, the essential process by which plants capture carbon dioxide as the building block for all their metabolism, is an ancient process (3.5 billion years old link). The critical enzyme of photosynthesis, ribulose bisphosphate decarboxylase, is inhibited by high concentrations of oxygen. The solution for that in most plants is to open the stomates, pores in the leaf, and let the oxygen escape into the air. The problem for plants of dry areas is that when oxygen escapes from the leaves, so does water vapor. Cacti are able to live in dry habitats because they evolved a biochemical pathway called crassulacean acid metabolism (CAM for short). CAM lets plants capture and store carbon dioxide at night. In daylight when sunlight is available to power the reaction, the stored carbon dioxide is released and photosynthesis occurs. Most plants have no method to store carbon dioxide for later use. Opening up the stomates to the air only at night conserves water because night temperatures are cooler--in the desert often much cooler. As anyone who has hung out laundry will tell you from experience, evaporation is much greater at higher temperatures. So exchanging gases with the air at night reduces water loss by cacti and other CAM plants, especially in comparison to doing that exchange in the high daytime temperatures of deserts. (See also link,  link)

Another prickly pear specialization for dry conditions is physical: no leaves. Prickly pears do photosynthesis in green stems. The big round green things are stem segments, properly called cladodes and popularly called pads. Plants have few organs--no kidneys, liver etc.--but stems and leaves are two of their organs. Stems grow from other stems: think of a tree branch branching. Leaves are terminal, leaves do not grow from other leaves. Cactus cladodes grow from other cladodes, revealing that they are stem segments.

In most plants, leaves are specialized for photosythesis. They are green because chlorophyll captures the light in photosynthesis (link). Leaves easily lose water. Plants of dry places have small, scale-like leaves, but they still lose water. By moving photosynthesis to the stems and disposing of leaves, cacti save water. A few cacti grow leaves during the wettest part of the year, then drop them, but most never have leaves at all.

Spines aid in water conservation. Of course cactus spines protect them from being eaten by animals. But they also help retain water. Spines across the surface of the cladode provide shade and protection from wind. Shade keeps the surface from heating as much. Just like animals, plants release water to cool themselves (called transpiration not perspiration). The less the plant surface heats, the less transpiration is needed.
Secondly, wind is very drying. Moving air evaporates off water and then brings air that is not saturated water to the surface, so even more water evaporates. Spines create a zone of still air right at the surface of the cladode. This saturates with water vapor but drains no more because it stays there, protected from air movement.

Prickly pears are found across a wide range of climates and the ones of moister regions often have less complete and less dense spines. Partly the need to conserve water is less, but also in moister areas there are more plants, so animals don't have to eat cacti. In deserts there are so few plants that hungry animals will bite a slightly spiny cactus, leaving only very spiny ones surviving.

Here are some of the spine variations. From almost none

To spines all over the cladode, uniform and unfriendly
To nasty long spines, mostly at the top of the cladode

In prickly pears, the cladode under the spines is edible. In Mexico and the U.S. Southwest, where prickly pears are common, they are eaten as a vegetable and can be bought in grocery stores. How to cook: Sunset Magazine TheSpruce  Patijinich and many more.

Obviously the spines have to be removed.

My photos do not emphasize them, but prickly pears have a second line of cladode defense. Many have tiny hairs, called glochids, less than 1/8" long, easy to over look. These stick into the skin and are worse than the spines because they are much more numerous. I quickly pull out the two or three spines that stick into my arm when I reach too close to a prickly pear. But the glocids are hard to see and stick into the skin: I find myself trying to dislodge them, like tiny splinters, all the next day. Those too have to come off it you want to eat a prickly pear cladode. Hence the attraction of buying prickly pears to cook rather than gathering them.

Hardy and happy in deserts, prickly pears can actually be found all across the United States and southern Canada (USDA map). They are pretty easily shaded out by grasses, shrubs and trees, but can be found on dry rocky spots in mid-continent and dry sandy spots along the coasts. When you see one in northern North America., appreciate how adaptable it must be to survive so far a desert.
Comments and corrections welcome.

Language notes: botanists distinguish between spines, thorns and prickles based on what tissue was modified to make them. Plant developmental biologists have shown that the spines of cacti are highly modified leaves, so they are spines, not thorns. Thorns are modified stems. (a link). I don't usually know the developmental origin of the spine/thorn/prickle so I find an authoritative source, in this case the Flora of North America on Opuntia (link), and call the spine/thorn/prickle whatever word it uses, in this case, spine.
1 cactus: 2 cacti is using the Latin plural in English, the form dictionaries put first. It is also ok to say 2 cactuses, the English-style plural, just a little harder to pronounce.