Rue. "You'll rue the day..."
Rue, Ruta graveolens (citrus family, Rutaceae) is a traditional medicinal and culinary herb, one we don't use much anymore. The plant is also known as garden rue (to separate it from other species of Ruta) and, especially historically, herb of Grace and herbygrass. It is not the same as, or closely related to, meadow rue (Thalichrium species, buttercup family Ranunculaceae) or goat's rue (Galega officinalis, pea family, Fabaceae).

Rue is an attractive plant, with blue-green foliage and yellow flowers. It is native to southeastern Europe but quite hardy. (It is naturalized in many U.S. states and three provinces of Canada link). 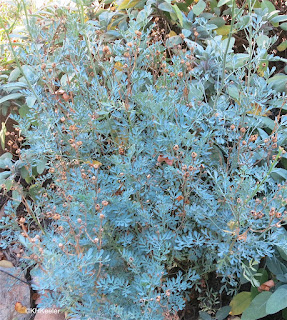 It has a strong smell that most people like or at least do not find offensive.

Rue is bitter and I had always thought the verb "to rue," to feel sorry over or wish something had not happened, came from the impressive bitterness of rue leaves. However, the Oxford English Dictionary takes the English name for the plant from ruta, the Roman name for the plant (via Old French) and derives the verb for sorrow and regret from Old German, a totally different origin. Both words go back 1000 years in English and have sounded and looked similar most of that time.

This story, reported originally by M. E. Leather in 1912, suggests others have linked rue the plant to rue the regret: "It is only a few years ago since a young girl went to Cusop [England], to the wedding of a young man who had jilted her ; waiting in the church porch till the bridegroom came out, she threw a handful of rue at him, saying "May you rue this day as long as you live !" The bridegroom "was told that the curse would come true because the rue was taken direct from the plant to the churchyard and thrown "between holy and unholy ground," that is, between the church and the churchyard." (Leather p. 115, online)

Independent of regret, rue, the plant, has been grown and used since Classical Greece (at least). It has bitter oils in its leaves and was used for a very wide variety of ailments as well as as a flavoring. Modern science does not seem to have verified any of the historic uses (link to WebMD, check out p. 2; German Commission E rue is missing from approved herbs). Yet modern medicine warns against rue's toxicity--that is, it really does things to the body. I suppose that can be reconciled into "there are safer ways to treat an upset stomach or relax the uterus." One of the major ingredients in rue is carcinogenic, overdoses cause everything from vomiting to confusion to convulsions, and the oil can cause strong skin reactions and/or leave the person highly susceptible to sunburn (photosensitivity). Pregnant women should avoid it because it induces labor. 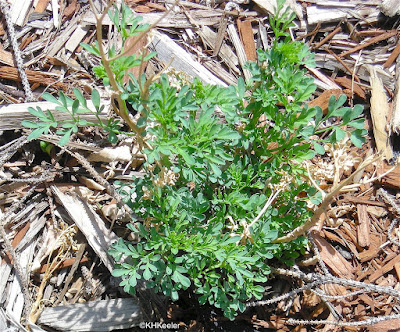 Thus, today you might grow it in your garden as an ornamental.

Historically, though, there was wonderful folklore. Rue was a protector: it protected from magic, werewolves, disease...Planting it in the garden protected the whole garden.

People wore it around their necks (or wrists and ankles) to ward off convulsions. People strewed it on the floor (and just about everywhere) to protect themselves from the plague. English judges carried sprigs of rue to protect them from the gaol fever than was so common among prisoners. (My sources say some jurisdictions still have a symbolic rue sprig for the judges but I can't verify that).

In Europe, rue was planted on graves and in gardens to protect the sage (Salvia officinalis, garden sage) from being eaten by toads. However, what the toads actually wanted was the beetles on the sage. The rue smell masked the smell of sage and the beetles, and consequently the toads, went elsewhere for beetles. (Rue is a good protector, but not necessarily a good companion plant link, link)

In a bath, it reportedly breaks all hexes and curses placed on you.

To clear the house of negativity, spinkle a salt water/rue solution thoroughout.

Folklore said to pick rue in the morning (or on Sunday) for it to be the beneficial herb of Grace.

Reportedly rue grew best when stolen--whatever that says about our ancestors. 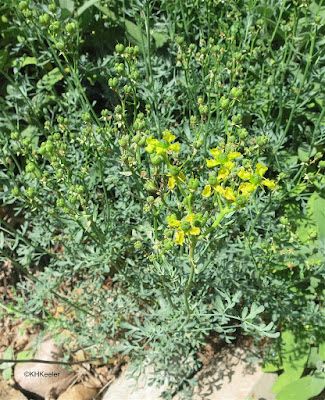 Rue is depicted on the collar of the Order of the Thistle, the highest order of chivalry in Scotland, awarded for exemplary service. The collar link has thistles, the emblem of Scotland, alternating with rue sprigs. It is a pun: St. Andrew is the patron saint of Scotland (that's his image on the collars), so on the Order of the Thistle collar we have the thistle and rue.

Rue grows easily. It keeps its leaves all year, looking shabby in midwinter but leafy. My plant flowers and sets seed, but only a couple of times have I weeded out seedlings. If your climate is more permissive seedlings may be more of a problem. Its a pretty plant I recommend. You'll not rue the day you planted rue. (Sorry.)
Comments and corrections welcome.

Posted by A Wandering Botanist at 1:02 PM