Weeds Can Have Beautiful Flowers

Walking in Boulder (earlier blog), many of the "wildflowers" were European species that have become naturalized in the U.S. Some are sufficiently common to be recognized as weeds. And yet, they can be beautiful.

Suppress your attitude toward these plants and notice them as flowers,

I find it hard to turn off "invasive species!" when I see these, but they are pretty.
Salisfy was introduced because it was a vegetable, especially the root but the rest of the plant is edible too.
Musk thistle came accidentally, most likely in ballast water in the hold of a ship.
(sunflower famly Asteraceae)
Field bindweed (Convolvulus arvensis, morning glory family, Convolvulaceae) on a fence in Toronto. Cheerful, aren't they? These are believed to have arrived as a contaminant of seeds, wheat in particular.
Hound's tongue, Cynoglossum officinale (borage family, Boraginaceae).  This, like bindweed, was probably a seed contaminant, riding along in imported seeds. The leaves have irritating hairs and the plant spreads aggressively, but the flowers are quite attractive.
Yarrow (Achillea millefolium sunflower family Asteraceae) can be a weed, a garden flower, a native wildflower, and a naturalized alien, depending on your view point. It has been used medicinally for millennia so people intentionally carried it all over the world with them. It self-seeds well and shows up where it wasn't invited, but I like it. 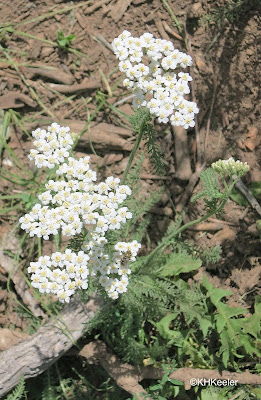 Dandelions (Taraxacum officinale sunflower family, Asteraceae) are certainly pretty, for all we persecute them. They were introduced to North America as vegetables; the root and leaves were eaten, the flowers went into dandelion wine. 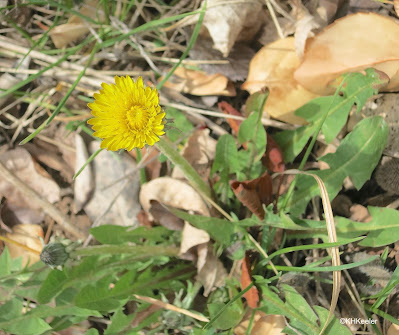 Dame's rocket (Hesperis matronalis, cabbage family Brassicaceae) was introduced for its beautiful flowers--you can see why--then got away and became too abundant, landing it on various noxious weed lists.
That's just a few weeds with big flowers. I looked up what is known about why they were introduced to get an idea of whether they were brought in because of their beauty. Mainly not. Many weeds with smaller flowers--even less likely to have been introduced as ornamentals--are exquisite if you look carefully. Grass flowers are green and not showy, but the plants are shapely. We just don't really look at plants, once we call them weeds.
Gardeners like plants that are "easy to grow" but usually that means they will grow easily outside of the bed in which they were planted. In propagating more natives as garden flowers, we will soon create annoying plants--weeds--of native origin. Sunflowers and morning glories may already be there. We aren't going to run out of weeds any time soon. So, maybe, admire them before uprooting them.

I googled the plants to see what the internet said about their origins, especially

Posted by A Wandering Botanist at 2:34 PM

Email ThisBlogThis!Share to TwitterShare to FacebookShare to Pinterest
Labels: weeds