It is not from Canada, though you can find it there... 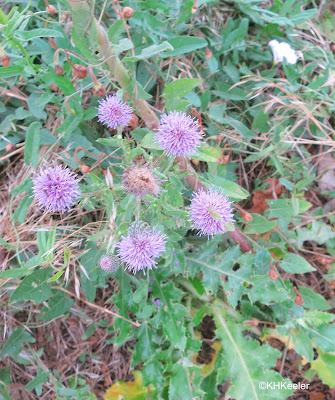 The plant we call Canada thistle, Cirsium arvense (sunflower family, Asteraceae) is from Eurasia but has spread all over North America. I was amused to see that Canadians call it Canada thistle, too, though official sites in Canada prefer creeping thistle or field thistle. In Europe it is usually called creeping thistle, a good descriptive name, and also corn thistle and field thistle.

Canada thistle is believed to have arrived in North America early in the 1600s, probably as a contaminant of imported seeds. 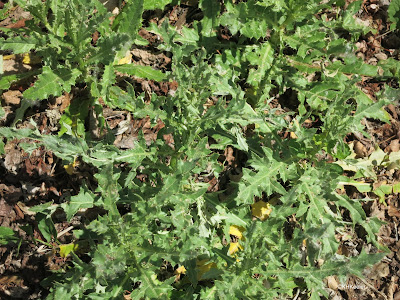 From its biology, you'd think Canada thistle would have had a hard time spreading as a weed; it is dioecious. Dioecious plants have two "sexes"; some seeds grow into plants whose flowers contain only pollen and will not develop seeds (staminate, "male"); other seeds develop fruits and then seeds, but lack pollen (pistillate, "female"). Obviously, both plants must be present for seeds. Furthermore, the flowers--pretty, pink--require pollinators to carry the pollen from the staminate plants to the pistillate plants. Thus, reproduction is much more complex than in, say, its relative bull thistle (Cirsium vulgare) with stamens and pistils within each flower or ragweeds (Ambrosia species, also in the sunflower family) which are wind-pollinated.

Furthermore, Canada thistle plants form big clones. Plants send roots out laterally and shoots come up from there.  Clones can be very large clone--one was recorded as 115 feet across. This certainly lets the plant live a long time, but that whole clone will be sterile unless near another clone of the opposite sex.

Obviously Canada thistle overcame whatever disadvantages dioecy created: it has spread all over North America. Probably it did that by having lots of seeds germinate in the same area, since half would be staminate and half pistillate. And, the clones are capable of moving substantial distances, which might bring them into the proximity of a mate.

Canada thistle plants can spread 15 feet in a year. I pull up Canada thistle shoots I find in my flower beds. The original plant may have come from my neighbor's (then) neglected garden, but now there's a probably lattice of roots down in my soil, searching for opportunities to send up a shoot. I repeatedly find new shoots 10 feet from where I've seen Canada thistle before. They emerge and grow for days to weeks, sending energy back to the roots, until I spot them--deep under a shrub or hiding in a stand of something else)--pull up the shoot. But likely the root complex got fed enough before I found it to have plenty of energy to come up in another place. It is botanical whack-a-mole, and I am not much amused.

The seeds are wind-borne, so can drift on the wind to colonize a new spot. They also grow easily from broken pieces of shoot or root, so control methods that just chop them up can actually spread them.

These adaptations for spreading have made Canada thistle a noxious weed--one requiring control--in about 40 states (see map in the Invasive Plant Atlas link) and across Canada (national class 2 noxious weed seed link ). They are spiny and form dense stands. Neither hikers nor cattle want to walk into patches of Canada thistle. Cattle don't eat it.

The clones can and do crowd out more desirable plants, whether forage grasses or native wildflowers.

The spines are quite nasty and go way down the stem. When, without garden gloves, I go to pull out a shoot, I wrap leaf of something else around the Canada thistle shoot, to protect my fingers. I don't do that for most weeds.

The name Cirsium is based on the name used for a thistle in Dioscorides' Materia Medica (64 AD), apparently based on cirsos, a swollen vein, for which thistles were used. The species epithet arvense means "of the field," so the uncommon common name, field thistle, matches the scientific name. You can see people writing Canadian thistle, but its more common to do the ungramatical combination Canada thistle, and acceptable in a common name. Where the word thistle came from is unclear. Much the same word was used in Old English, Old Dutch, and Old German, so they say "traditional name" but don't suggest why this word and not another.  Etymonline.com suggests it is from a hypothetical Proto-Indo-European word, *steig, meaning "to prick, stick, or pierce."

The plant is nontoxic and had virtually no traditional European medicinal uses. It is probably edible if you remove the spines, but it is sufficiently spiny that that would be very difficult (and unpleasant). However, although it has only been available for 400 years, Native Americans used it medically; a decoction of the roots was used to cure children of intestinal worms and for mouth ailments and the leaves and stems treated respiratory problems including tuberculosis. (See Native American Ethnobotany link )

I find Canada thistle relatively easy to tell from the other thistles of my region because it has the smallest flowers--under 1/4" in diameter--and forms clones.

So, okay, the flowers are pretty. All kinds of bees, butterflies, and interesting flies are attracted to Canada thistle flowers. I can imagine a clump of it as attractive in the garden, lovely pink-purple flowers and a cloud of pollinators. But it wouldn't stay that way; the next year I'd have spiny shoots and seedlings everywhere. Not to mention that is a prohibited species in Colorado, reported to infest 7,244 acres in my county alone (link).

There are many plants that would be lovely if they were uncommon, but lose their attractiveness when they take over, dandelions for example. Canada thistle fits this category for me. I'll appreciate it properly in Europe or if it is ever rare here.