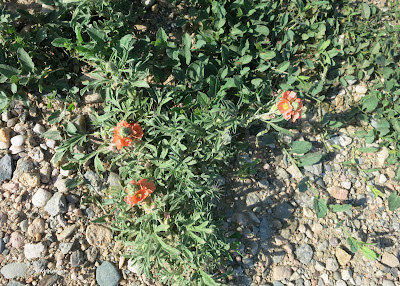 This is a plant of disturbed sites but not much of a weed. It can be common along trails and by parking lots. Its range goes from the Great Plains west to the Pacific. 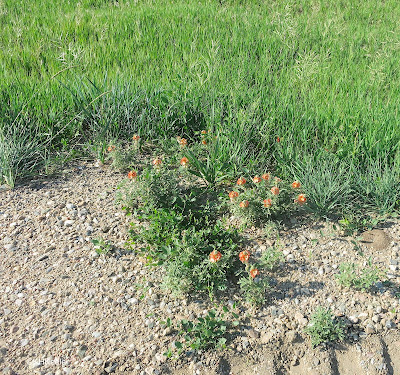 The more formal sources I checked call it scarlet globemallow, because apparently globemallow is a good common name for plants in the genus Sphaeralcea. (Sphaeralcea means globemallow;  in Greek sphaera = globe and alkea = mallow, globe refers to the rounded seedhead). There are 53 globemallows, most native to the Americas, especially western North America, a couple in South Africa. But beyond the genus Sphaeralcea, the mallow family to which they belong (the Malvaceae), has 4,225 known species, any of which could be called mallows based on their membership in the family, so globemallow makes it much clearer which plant you mean. Most of my 1970s and 1980s sources call it copper mallow, which worked well on the plains where there were few mallows and no other orange ones, but isn't as helpful in Colorado or New Mexico where there are several other orangy globemallows (see SWColorado wildflowers: link)  Cowboy's delight is a catchy prairie name.
"Coccinea" in the scientific name means scarlet. So scarlet globemallow says Sphaeralcea coccinea in English. 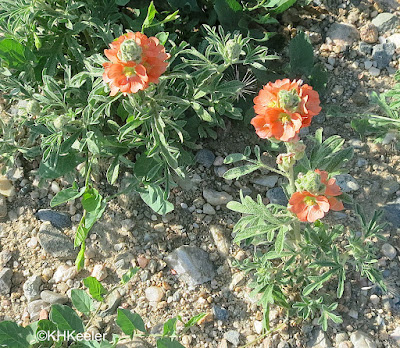 Scarlet globemallows are spreading perennials which rarely get very big--to 16" tall, maybe the same in diameter. They have a deep woody taproot which makes them very hardy once established. There is no consensus on how long they live. In one study in western Kansas, most plants lived fewer than 2 years and none more than six, while botanists elsewhere considered the plants to often live more than a decade. Many plants have very high mortality at young ages, but, when on a really good site, live well beyond the average lifespan. This kind of pattern makes it hard to generalize. Does a gardener expect to have to replant soon or will the plant will be there indefinitely?
Scarlet globemallows, being tolerant of both drought and disturbance, tend to increase in response to fires, grazing, and soil disturbances (trails, roads, abandoned fields). They rarely get so common as to be considered a problem and competition from other plants reduces their numbers. They will grow on a variety of soils--note the red and gray soils of my photos. They are recommended for reclamation projects as soil stabilizers--and because they are food for many animals.
Scarlet globemallow is a preferred food of cows, deer, pronghorn, and prairie dogs, at least part of the year, but not much eaten by horses or elk. Birds and small mammals eat the fruits and seeds. Grasshoppers munch on it. Caterpillars of the small checkered-skipper butterfly (Pyrgus scriptura) feed on it and it is probably the host plant of other butterflies as well. The flowers are an important nectar source for numerous rangeland butterflies and native bees. Approach slowly enough to observe the pollinators. 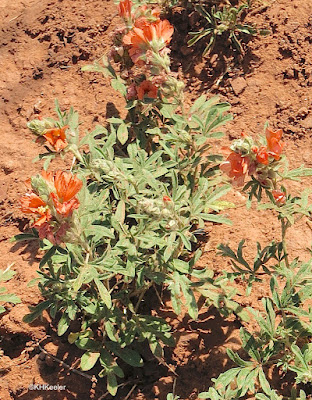 Many Native American tribes used scarlet globemallow medicinally. The uses included spreading it on their hands for protection from boiling water, as lotion to treat sores and skin diseases, as a tonic, and to give a singer strength. The Hopi made a paste of the ground roots that they put around a broken bone to hold it in place and used a similar paste to harden adobe floors. However, the only food use recorded with all of those was as a starvation food for the Navajo. That suggests strongly it does not taste good to humans. 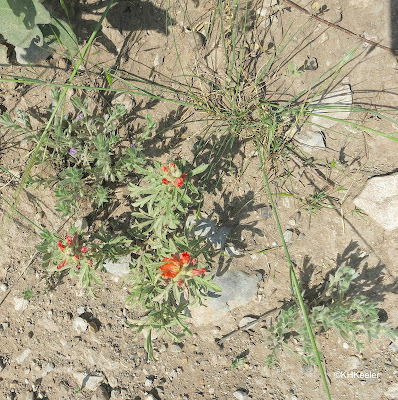 Scarlet globemallows are easy to recognize because of the bright red-orange flowers. In addition, the leaves are distinctive, with deep divisions (palmately lobed). On a close look, they are covered in fine soft hairs. Look for them along hiking trails. 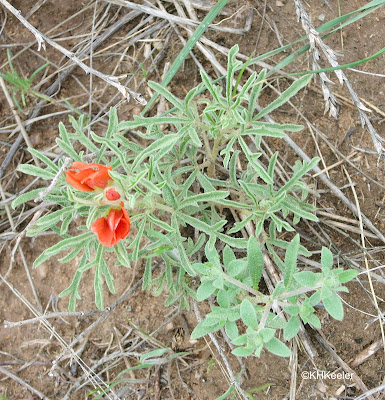 Scarlet globemallow is a wonderful example of a native wildflower to grow in your garden. The flowers are bright, pretty, and open all summer long. The plant will live several years. Although you will likely find some seedlings in your garden,  the plants do not spread aggressively. As a preferred food of many species of native butterflies and is the host plant for others, the flowers draw many insects. Lovely plants.
Comments and corrections welcome.