The Alnwick Poison Garden is a very famous collection of poisonous plants. On my recent trip to Edinburgh, Scotland, we made a day trip south to Alnwick, on the coast in northernmost England.

The Poison Garden is part of Alnwick Castle's gardens, all of which had a recent make-over and are quite lovely. I was there in a drizzle with not much time, so I focused on the Poison Garden.

It was behind a sturdy wall and admission was only with a tour. I joined the one that had just started. The limited access says a lot about public responses to a garden of poisonous plants. And probably about liability.

The garden itself was small and British in its orientation. It was in good order, the names on the signs matched the plants. (That’s not easy; plants grow away or die, messing up signs). Since it was fall many of the poisonous plants in the garden were going to seed, so the staff had brought in big pots with plants in flowers to supplement the collection.

The collection is nearly 100 different species, although on the guided tour only talked about maybe a dozen. I remember seeing these plants in the garden:

>junipers, Juniperus (fleshy cones "berries" of European juniper, Juniperus communis are considered     safe to eat, cones of some other species are quite toxic and leaves should be avoided)

That's not a quarter of the plants there!

Online advertisements for the garden emphasize that these plants can kill you. That’s true, although, for most, you would have to eat a decent-sized serving, ignoring the unpleasant taste. Still, they are poisonous enough to be fatal. We live among dangerous plants.

Garden's protective stone wall was enhanced by signs like the one below, describing particular incidents involving poisonous plants. 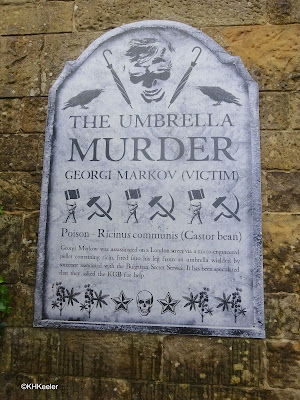 I was particularly interested in belladonna and bittersweet nightshade. These two poisonous European plants are in the tomato and potato family, Solanaceae. Americans tend to shake their heads at the foolishness of Europeans who, when tomatoes (Solanum lycopersicum) and potatoes (Solanum tuberosum) were brought to Europe in the 1500s, did not immediately eat them. I had wondered if Europeans' experience with their native solanaceous species might have colored their reaction.

This is bittersweet nightshade, Solanum dulcamara (below). All parts of the plant are poisonous. It is a vine, but the little red berries look a lot like cherry tomatoes. They are about half the size of modern cherry tomatoes; I don't know how big the cherry tomatoes of the 1500s were. On the vine and clustered like in the picture, you'd easily tell them apart. In a big bowl for sale at the market...maybe not.

Below is belladonna, also called deadly nightshade. You wouldn't confuse it with tomatoes, but like bittersweet nightshade, the leaves resemble potatoes. Potato fruits and leaves are poisonous. Only the tuber is safe to eat (if you avoid any green skin). The guide said one of the dangers of deadly nightshade is they taste pretty good, encouraging the unwary to eat more after the first one and that twelve will kill a healthy adult. European cautious approach to American solanaceous plants was probably sensible given their experience with similar European plants.

The Poison Garden had many plantings like this one of hellebore, Lenten rose (Helleborus), which didn’t look like much in September. It flowers early in the spring (photos) and is quite poisonous. 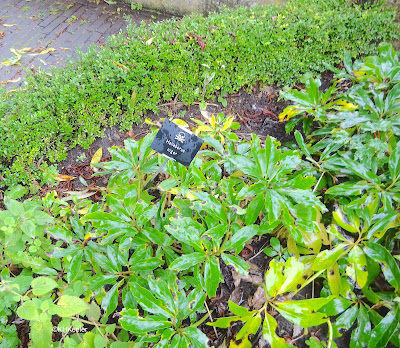 Many plants were going dormant and didn't look like much, for example castor bean (Ricinus sativus) and foxglove (Digitalis ).

The flowers below are callled autumn crocus, meadow saffron, or painted ladies, Colchicum autumnale. It is so pretty, but contains colchicine, which is highly toxic and for which there is no effective antidote. In my biology education, we applied it to cells to look at the stages of cell division; its poison stops cell division very effectively.

The leaves at the lower left and middle right in the photo above are columbine leaves. That surprised me, but a quick search confirmed that at least one European columbine, the common columbine, Aquilegia vulgaris, is quite poisonous.
It was lovely and thought-provoking visit to the Alnwick Poison Garden. I wish I could have seen all the castle’s gardens.
Comments and correction welcome.
Kathy Keeler, A Wandering Botanist
More at awanderingbotanist.com
Join me on Facebook: https://www.facebook.com/AWanderingBotanist
Posted by A Wandering Botanist at 8:12 PM