There's a long tradition of putting oranges into Christmas stockings. Oranges are so readily available today that that seems a little odd. But the next time you encounter an orange, take a moment to notice it. The rich orange color. The scent, both of the whole fruit and of the brightly colored sections inside, is enticing. The wonderful sweet juice.

Oranges are citrus fruits, genus Citrus, in the citrus family, Rutaceae. Citruses are wild in southeast Asia but there are no wild oranges. All our commercial citrus fruits are hybrids, some very complex hybrids, produced by people, starting thousands of years ago. When I say orange, I am imagining the fruit more properly called the sweet orange, Citrus xaurantium (aurantium means from orange-colored, x indicates a hybrid). This is a relative late-comer. The earliest report of it in Europe is from the 1500s. Bitter oranges, also Citrus x aurantium but not sweet, reached Europe by the 11th century. People loved them, especially in cooking and as flavoring, but the sweet orange was a superstar.
None of the citruses survive a hard frost, so they had to be grown in the southern edges of Europe. Sweet oranges made a toe-hold in Sicily but it was in southern Spain and Portugal where they were planted in large numbers. For most of the Middle Ages, though, that area was part of Muslim kingdoms at war with Christian Europe. They didn't trade oranges to Christian Europe. In 1492 Spain under Ferdinand and Isabella defeated the last Muslims and took over all of the Iberian Pennisula, including the orange groves. And, in 1520, the Portuguese brought a ship-load of sweet orange trees from India. 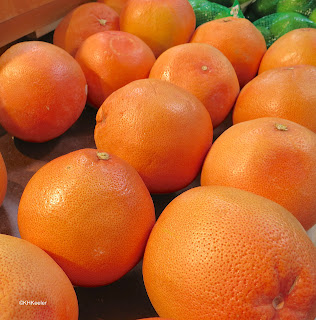 Between 1492 and the 1520s, sweet oranges were introduced to Europe. This was a new fruit, and they used the Spanish name, naraja, or the Portuguese, laranja, which were themselves versions of the Arabic, naranj, and the Sanscrit naranga. In many European languages, the word for the orange is similar and first appeared about 1500, though parts of Europe still call oranges Portugals.

(Curiously, the word for the color orange was derived from the fruit, not vice versa. Color words evolve and change just like everything else. Previously the English probably said yellowish red or rust-colored, but this new fruit gave them another word for that color, orange, and it was rapidly adopted; the first example known to the Oxford English Dictionary was in 1557.)

Oranges can be deliciously ripe with a green rind, but cool conditions during development turn them orange, and the color is a distinctive characteristic we've come to expect.

Sweet oranges were a hit in Europe. Rich people in southern Europe grew them in large numbers and indulged in them. In 1529, the Archbishop of Milan gave a banquet that include caviar and oranges, brill and orange slices, oysters with oranges, sturgeon in aspic covered in orange juice, fried sparrows with oranges...it goes on. Some of those dishes were probably made with bitter oranges, but you get the idea.

Northern Europeans wanted oranges as well. They began with plants in pots that were pulled inside when the weather cooled. That developed into building orangeries with roofs and heaters, glassed in, when that technology became good enough (1800s). They were helped by the climate. As late as the reign of Elizabeth I, oranges could be grown in the ground in Sussex, southern England.  From the 1500s through the 1800s, rich people competed to have the most luxurious stands of oranges, for both the fruit and the flowers. (see the edifaces they built: google on famous orangeries).

The Crusaders returned from the Holy Land with fond memories of citrus fruits. Europeans deduced from that that oranges had been growing there at the time of Christ, though in fact oranges arrived just before the Crusaders and are not mentioned in the Bible. Consequently, painter after Medieval and Renaissance painter included oranges, orange trees, and orange blossoms into portrayals of the Madonna and Child, the Last Summer, the Garden of Eden and other illustrations of Biblical stories (look for them!) Probably this association, very visible in classic art, encouraged giving oranges at Christmas.

Until recently, oranges were rare and expensive. The wealthy could grow their own, but most people rarely saw an orange. We easily forget that less than 100 years ago, fruits would be transported relatively slowly, overland, summer and winter. Refrigeration, to preserve fruit, took hold slowly; ships from 1890, airplanes for freight from 1910, trucks from 1925, but it took decades for refrigerated shipping to be widespread and carry fruit to your grocery store in December. One of the orange's strengths is that the thick rind allows it to be transported long distances with minimum protection. Long before other tropical fruits like pineapples or papayas could be successfully shipped to northern markets, oranges were there. Beautiful, fragrant, tasty, a fresh fruit in winter...they made great gifts.

Today there are hundreds of varieties of sweet orange, as well as other sweet citrus fruits like tangerines to choose from and they are available year round across the continent. They are so successful that they've become ordinary.

But they aren't ordinary. Take a moment on a cold winter day to savor an orange!