My husband won't eat green beans. It is the one vegetable he totally rejects. But last summer I grew runner beans. Not as food, but because I think they're beautiful.
Runner beans, often called scarlet runner beans (Phaseolus coccineus), are closely related to common beans (Phaseolus vulgaris). Both are native to the Americas, but scarlet runner beans are from mountainous areas in Central America, and were domesticated about 2,000 years ago. They reached Europe in the 1500s and became both an important vegetable and an ornamental. They are much less often grown in the United States. I recommend them!
This is a bean, a legume in the pea family (Fabaceae), which grows much like the viney forms of common beans. It climbs vigorously. "Few kitchen gardens look complete in summer without an arch or tall support smothered with runner beans" wrote Lorraine Harrison from London (p. 11). I have grown runner beans very successfully on a fence. Last year I planted them next to corn, thinking they would twine up the corn stalks. That was not very successful because the corn did not grow very tall, while the scarlet runner beans shot up four feet almost immediately; several times I provided them with another stick to climb.
The flowers are a gorgeous red. They would have made good cut flowers, but I just let them grow last summer.
The pods are very like common beans. They grow to be longer than common beans and should be harvested young if you want to eat them as green beans, since mature pods are quite tough. I like the taste of common beans slightly better, but can't tell you what the difference is, and certainly liked scarlet runner beans fine.
Common beans are both eaten as young pods, green beans, or allowed to ripen and eaten as dry beans (kidney beans, navy beans, pinto beans, etc.). Scarlet runner beans' seeds can be used the same way.
You'll notice, though, that we don't usually eat beans, whether the long green pods or the seeds, raw. It is not just the custom, it is a necessary precaution. Beans, common and scarlet and related species, contain phytohaemagglutinin (a fancy word that breaks down to "plant compound that causes red blood cells to clump together"), which makes them quite toxic. However, boiling is very effective destroying phytohaemagglutinins. (More details on safe cooking link). Always cook beans well.
The common name is pretty descriptive and makes clear the easiest way to tell them from common beans: scarlet runner beans have a bright red flowers. However, there are varieties of scarlet runner beans with white and red-and-white flowers as well. Breeding, in Central America and Europe, has produced beans, the seeds, that range in color from white to red brown to nearly black. The more you look into runner beans, the more diversity you find, with Dutch and English and Mexican varieties, though American seed companies offer only a few.
At home in Central America, runner beans are perennial. But, although they tolerate cool temperatures, they do not survive a hard frost and are grown as annuals in temperate areas.
The scientific name Phaseolus was a word for beans when Latin was spoken. Then, it applied to Old World species like Vigna (mung beans, aduki beans, cow pea). Linneaus made it the scientific name of beans from the New World. The species epithet coccineus means scarlet.
Across the world, for millennia, beans have been important foods; they are high in protein and can be stored dry for long periods. They were part of ceremonies which celebrated planting and the agricultural cycle whether in Greece, Japan, or Mexico. Very few of the recorded superstitions apply to runner beans specifically, but people will have swept them into their beliefs as "beans." Europeans included beans in Saturnalia festivals; Europeans thought bean flowers held the souls of the dead and must be treated with great care. Beans feature in lots of modern expressions, consider "bean counter," "spill the beans," full of beans," and "not worth a hill of beans." Examples of existing customs incorporating beans: in Japan, in China, at New Year's. 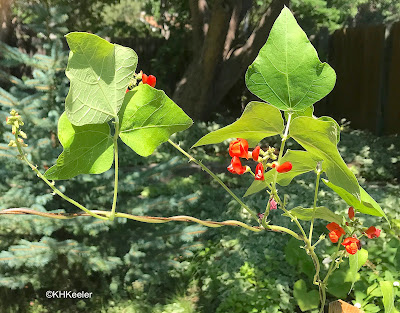 Beans were a staple of the diet. As Americans got richer, they ate more meat and fewer beans. Today beans are making a come back, for health reasons, to reduce meat consumption, and because, properly cooked, they are delicious. Runner beans are part of that trend; the dry beans are very good indeed.
Growing runner beans last year, I got only one bean pod. Since my husband won't eat them, that was a disappointment to me as a gardener, but not a hardship for the household. I got plenty of seeds from the plants on the fence a couple years back. This difference was because scarlet runner beans grow well and flower in partial shade but develop fruit only with full sun. My trees have grown to shade my garden. Next year I'll give them a proper set of supports and lots of sun and grow both flowers and beans.
Comments and corrections welcome.
For recipes: consider this search (runner bean recipes): link
References
Harrison, L. 2011. A Potted History of the Vegetables. Ivy Press. Lewes, Sussex.
Sando, S. 2011. The Rancho Gordo Heirloom Bean Grower's Guide. The Quadrant. London.
Storl, W. D. 2016. A Curious History of the Vegetables. North Atlantic Books. Berkeley, California.
vanWyk, B.-E. 2005. Food Plants of the World. Timber Press. Portland, OR.
Kathy Keeler, A Wandering Botanist
More at awanderingbotanist.com
Join me on Facebook: https://www.facebook.com/AWanderingBotanist
Posted by A Wandering Botanist at 3:00 PM