Thirty years ago yesterday, I was picked up at the end of a backpack trip in the Costa Rican rain
forest. 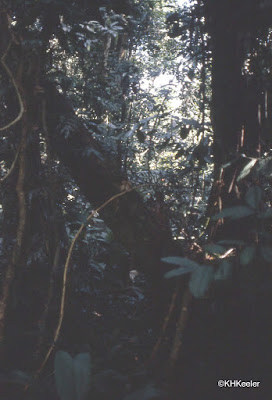 I grew up in suburbia, it was love of plant ecology that drew me into strange activities like a week's trek in the rainforest.

In 1986 I was an Associate Professor of Biology at the University of Nebraska-Lincoln with research interests in ant-plant interactions. The Organization for Tropical Studies (link) had helped raise the money to protect watershed above their La Selva Field Station (link) in the Atlantic rainforest of Costa Rica (now part of Braulio Carillo National Park) and arranged for diverse scientists to come hike through it to see what was there. My teaching schedule made it impossible to go with the main group, but six of us, Dave Janos of the University of Miami, four students and I went a few weeks later.
(The photos are 30 years old. There's not much I can do for them. However, if you click on them, they enlarge.)

Dave Janos and I did thesis research in Costa Rica at the same time, but in the intervening decade, Dave had worked continuously in Costa Rica while I had mostly been elsewhere. Dave was a very experienced rainforest ecologist and easily led the expedition.

The hike started at about 3000 m. (multiply by 3 for feet) and ended at La Selva, nearly at sea level. That was brilliant of Dave: the earlier group hiked up. I couldn't get there as early as he did, so I met the others at about 2500 m. elevation.

Memory is funny stuff:  I found my notes and they say, a week before I left, "I'm not feeling very brave. To stay [home] would be FINE."

But of course I went.

I don't know what I was thinking: I way overpacked. So much that I worried about getting all that weight onto the international flight from Miami. Somehow it didn't register with me that on a backpack trip, you CARRY the things you take with you. I guess I was planning to leave lots of things with O.T.S.

Not to worry, my suitcase was lost in transit and only the (heavily-packed) backpack arrived. I made an emergency shopping trip in San Jose for essentials like boots and pants. I still had way too much gear and in fact did leave many items with O.T.S.

I had gotten into pretty good shape walking up and down the bleachers in the university's volleyball stadium, but the hike was hard going. Logs lay across the path, to be stepped over. When we came to a stream, often we climbed almost vertically down four or five feet, stepped over the water and climbed back up four or five feet to the trail. My journal mentions that I "put a foot through an embankment and fell headfirst. My foot went in up to hip level. Yuck."

Martha Rosemeyer, Ph. D. student at U. California Santa Cruz, had gotten bad blisters in the previous days of hiking, so she was walking slowly. I was just slow. The other four started after we did on several days and always arrived well ahead of us. The good side of that is that they'd be setting up at the campsite when Martha and I arrived.

The camping sites ranged from abandoned farms--very nice!--down to wooden A-frames with log floors. Before that trip, I would have told you I wasn't intrepid enough to sleep on the ground in the rainforest--stinging ants, snakes, all sorts of forest-floor animals--but, basically, I did, no problem.

It wasn't the rainy season. In the Atlantic lowlands of Costa Rica, that meant it rained every afternoon but not all day. The constant rain made the trail very muddy. I remember at one point deciding whether to sit in a rocky stream to wash off mud, getting all wet, or stay muddy. I chose washing off, ending chilly and very wet but not so muddy.

I took the picture below to show the mud. There's a log lying forming the entrance to the A-frame, and beyond that it was a sea of soft mud. I tried to step close, sit, swing my feet in, and get the boots off without bringing mud in. It was never fully successful. Outside A-frames and cabins, we were muddy to the knees nearly all the time.

Since our goal was observe the forest based on our research interests, we made time to look at the forest at least every 500 m. downhill. We were all committed to biology, so looking around was a delight. 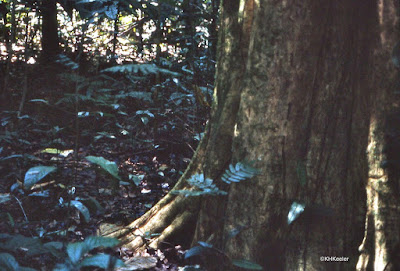 My journal mostly categorizes the discomforts--only 1 pair of jeans for a week of muddy hiking, for example--but in memory I had a wonderful time. 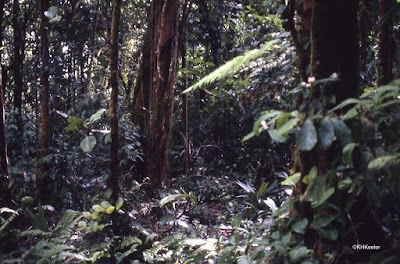 I can't point to many dramatic highlights. Mostly we slogged through dim forests. My photographs do show that.

I don't remember seeing any mammals though we heard monkeys in the forest. Likewise, most of the birds were heard and not seen, but some were wonderful, bellbirds in particular.

The only snake I remember was sitting on a leaf when I was recording plants along a transect. One moment it looked like moss on a leaf, the next moment I recognized a snake. I didn't know if it was poisonous but I didn't like the look of it and gave it a wide berth. I think in fact it was the eyelash viper (Bothriechis schlegelii) or similar species. Probably we did see other snakes: only a few of Costa Rica's snakes are poisonous. Below is the photo I took of the snake. The picture isn't great: I wasn't willing to get very close. It was about 4' off the ground.

We didn't think of it at the time--because that's how it was 30 years ago--but of course we were cut off from aid. Cell phones didn't exist. If we'd had a problem, one of us would have hiked rapidly down the trail for help. The area was surrounded by private land, so getting out to find a phone would only have been a few hours walk out and then the same time back with help. Compared to today when you imagine digging out the cell phone to call for help on a helicopter from wherever you are, it was a  much less connected time.

I saw thousands plants, but the forest is so diverse I was happy to recognize what plant family they were in and delighted to guess the genus. I pressed plants, collected bits or made sketches to be able to identify them. In 1986 my camera was not digital and pictures had to be carefully chosen not to run out of film. There were some spectacular plants, though, like the insect-destroyed leaf below and the white seedling (no chlorophyll. Unable to synthesize its own food, it won't survive). Those things aren't unique to tropical rainforest of course.

I took several photos of leaves with holes and layers of moss and fungi. In seasonal North American forests, leaves are shed and regrow every year. In the warmth and moisture of the tropical rainforest, leaves can--and do--last for years. Which allows all kinds of things to grow on them! Growing in the dim light of the forest floor, many plants grow slowly and have a lot of investment in each leaf. Consequently, like an old but driveable car, the plant keeps a battered leaf as long as it can.


Here and there, there were brightly colored insects! I don't have many photos of them: they generally ducked away when the camera was aimed at them.

At the end of the week Martha and I took the option of a ride down to the La Selva field station, letting the others hike one last day across the La Selva property. I was horribly dirty and ready for the amenities of civilization--like a shower with soap!

My botanical observations from the trip were pretty quickly made but they contributed to O.T.S.'s knowledge of the area above the field station. It was an important event for me personally, doing something unfamiliar and therefore scary. The memories of discomfort have faded while the positive memories remain.

Posted by A Wandering Botanist at 1:54 PM