April 28. I needed to check out the trailside plants of Horsetooth Mountain Park, on the west side of Fort Collins Colorado, for a plant hike I was going to lead the next weekend.

When I got there it was snowing. Lightly, mixed with sleet, but persistently.

One of the things I learned as a prairie ecologist: "do it now, the weather later may be worse."

Hiking out in the sleet/snow was cool but not unpleasant and I knew the weather forecast was for snow for the next three days. Out I went!

Plants like the yuccas (Yucca glauca) and grasses in the photo were green but only slowly putting on new growth.


Lots of little mustards (plants in the mustard family, Brassicaceae, related to mustard and cabbage) were in flower (yellow flowers in the photo). They are probably mountain bladderpod, Physaria montana (formerly Lesquerella montana) but there's a bladderpod that is found only in three counties of Colorado, the Front Range or Bell's twinpod (Physaria bellii) which is common in this area and quite similar. The easiest way to tell them apart is double (Front Range twinpod) versus single (mountain bladderpod) pods. The ones I checked were single but many had not developed their pods very far. Also with yellow flowers in photo, but inconspicuous because the flowers are small is wild alyssum (Alyssum simplex) a yellow-flowered relative of the garden flower sweet alyssum (Lobularia maritima, formerly Alyssum maritima) or possibly Alyssum alyssoides, pale madwort, which is very similar. All three are from Europe. 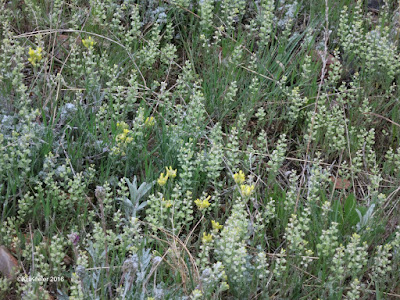 Here's one of the bladderpods. Its hiding under the thistle leaves...follow the stem back to the left. 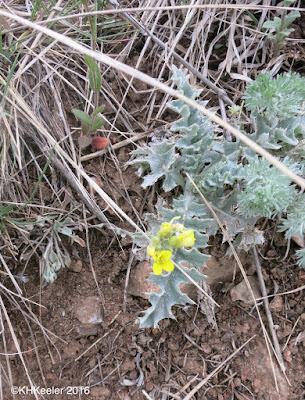 Down below the trail, someone had thrown a bunch of uprooted plants. 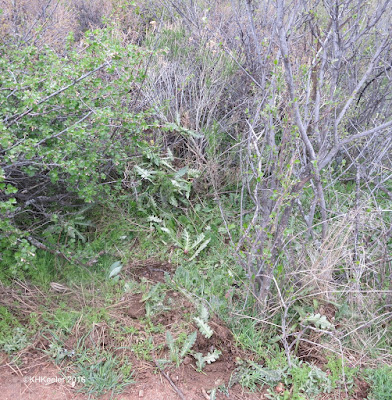 Busy park trails don't stay weed-free on their own. Volunteers have to clear out weeds before they get big and numerous. Without climbing down, I thought those looked like thistle leaves. The weeders clearly knew their plants because they didn't pull up native thistles like the one in the picture above (with the little bladderpod) or in the photo below (both wavyleaf thistle, Cirsium undulatum).

Thistle species seem to be of two types, ones that are noxious weeds which we want to eradicate, and ones that are rare and need protection, so it's important to know the difference.

There were lovely native wildflowers open. For example, the yellow prairie violet (Viola nuttallii) shown below. Violets are easily recognized. This one has typical violet flowers, but not the characteristic heart-shaped leaves. Thus, you might mistake it for something else without flowers, but on the good side, if you recognize that it is a violet, it is easy to figure out which violet species it is.
The flowers in the photo below are Mertensia lanceolata, chiming bells (borage family, Boraginaceae). The buds start out pink but develop into blue flowers. This plant is also called bluebells. There are several wildflowers in the Front Range foothills with blueish nodding, bell-like flowers that get casually called bluebells. I've had a hard time learning which is which--though they really aren't that similar--so I'm carefully saying chiming bells to help with learning them.
The lacy white stuff is what happens when sleety snow lands on horizontal spiderwebs!

The spiderwebs with snow were pretty, but the spiders surely didn't appreciate being revealed like that.

The wild plum, Prunus americana, was in full bloom. It looked all snowy without needing real snow. 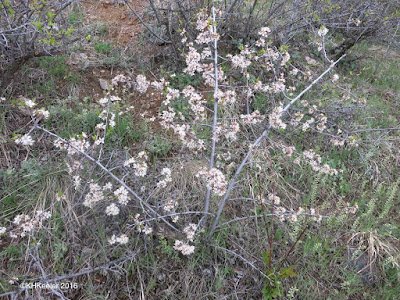 This, below, just made a lovely snow-dusted photo. The reddish plant is red stork's bill, Erodium cicutarium, one of the earliest weeds of spring (blog about Erodium). What else is under that snow I'm not sure. 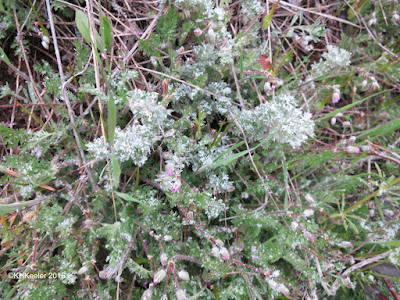 It was a lovely spring wildflower hike despite the falling snow.

And, the weather did get worse, colder and snowier all week.

When you have a chance to hike, hike!

Coming next blog: the same hike on a sunny day 5 days later.

Posted by A Wandering Botanist at 12:24 PM