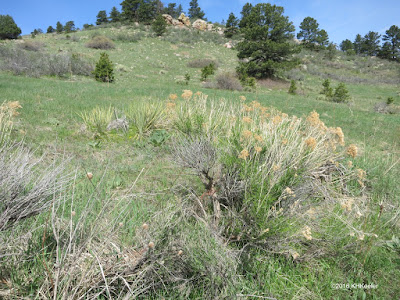 Flowers that close in cold weather were open!

False salsify is a European weed that also goes by the common name cutleaf vipergrass. More pictures. I don't like either common name. One defines it by what it isn't (not salsify) and the other calls it a grass, although it is not in the grass family, Poaceae. Eland in Plant Biographies says the roots of a close relative, Scorzonera hispidum, were used to treat snakebites. Scorzonera hispidum also gets called black salsify, again remarking on the similarity to salsify. "Grass" is one of the words that 300 years ago was a general term--lots of small plants were called grasses--but now has a much narrower meaning, restricted to one plant family. Vipergrass appears to be a very old name. My two favorite, authoritative and recent sources on Front Range plants (see references) use different names for the genus (Podospermum and Scorzonera) so a wide range of names are currently available for this plant. Its relatives are edible but I can find nothing on this particular plant, except that it is a weed in central North America. The Flora of North America does say it is monocarpic, meaning that the year it flowers it puts all its reserves into seeds and dies (blog on monocarpic agaves).

Here's a photo of 'real' salsify, Tragopogon dubius, also in the dandelion family. The flowers are similar but the buds of false salsify are more "bulbous" than those of salsify and false salsify branches more.

In addition salsify flowers a little later in the year than false salsify.  In my yard--salsify is a very abundant weed in northern Colorado--they are growing strongly (where I haven't spotted them and weeded them out) but are not yet ready to flower, while false salsify is flowering now.

THEN I saw wavy-leaved dandelions, Nothocalais cuspidata. This little plant is native. It was a treat, they are not very common. (Or perhaps, easily taken for a common dandelion and overlooked).
I had seen spring beauty on the previous hike but the flowers were closed and I wasn't sure of my identification. This time, with sunshine, they were open and it was clear that it was spring beauty, genus Claytonia. There are 27 species of Claytonia listed for North America, in the plant family Montiaceae (Montia is miner's lettuce). (You will see it also placed in the purslane family, Portulacaceae). Five of the 27 species grow in Colorado, so suddenly my identification was less certain. Three are from much higher elevations, so I ruled those out. Redstem spring beauty, Claytonia rubra, is an annual that didn't look much like the plant I saw photos. I concluded this is Claytonia rosea (photos). Ackerman calls C. rosea Rocky Mountain spring beauty, the USDA Plants website calls it western spring beauty, the Wildflowers and Other Plants of the Larimer County Foothills Region calls it simply spring beauty, suggesting it is the only spring beauty you are likely to see hiking the Front Range foothills.

This is a common problem, seeing a plant and thinking you know its exact name, only to discover that there are two or three closely-related species in the area. We have much greater plant diversity than there is space for in easily-carried wildflower identification guides.

I was too hasty and didn't get a good close up photo of the spring beauty. They're extremely lovely flowers, look closely when you see them!

Here is Colorado loco, Oxytropis lambertii, pea family, Fabaceae, because it is so striking.
Also striking wildflowers are the larkspurs, Delphinium species (buttercup family, Ranunculaceae). My photos were too distant: I looked down the slope at them from the trail. So this is from last year. However, the photo was taken at Devil's Backbone Open Space, not Horsetooth Mountain, and in late May, not early May, so it may not be the same species of Delphinium flowering that I saw on the Horsetooth walk. There are two very similar, dramatically handsome blue larkspur species in the Front Range foothills. As I said, there's a lot of plant diversity, even among highly visible plants.
Fringed puccoon (Lithospermum incisum, borage family, Boraginaceae) is tiny--a couple inches tall-- and easily overlooked among other yellow spring flowers, but aren't they pretty!

This is the shrub Oregon grape (Berberis repens, barberry famly, Berberidaceae, also in books as Mahonia repens). A better common name is creeping barberry because the Colorado species doesn't make it to Oregon, where they have a different species (Berberis (or Mahonia) aquifolia). The Flora of North America author reviewing the barberries determined that the species called Mahonia are not different enough from Berberis to warrant being in a separate genus and merged them into Berberis. Some authors, for example USDA Plants website, continue to use Mahonia, though they give the common name as barberry (making for the confusion that both Berberis and Mahonia are barberries).

The growing season is just getting started: among the wild alyssum seed pods below are the yellow-and-orange almost-open buds of sulphur flower (Eriogonum umbellatum, buckwheat family Polygonaceae). Open flowers: link


Walking out, there were lots of fascinating flowers, native and introduced.

The struggle to name the plants accurately too often eclipsed enjoying other stories about them. For example:

The false salsify, wavy-leaved dandelion and of course the common dandelion (Taraxacum officinale blog post) only open their flowers when its warm enough (sunny). You'll work much harder to spot them on a cool or cloudy day.

Finding that plants of the same species, growing together, have different numbers of chromosomes (are polyploid) is a hot research area in botany currently. The eastern relative of our spring beauty, Claytonia virginica, was shown 50 years ago to have local populations where the different plants had different numbers of chromosomes, from 12 to 190! Shocking, because when chromosome numbers differ in animals, it produces all kinds of problems. In plants it doesn't seem to matter much, as the classical studies of Virginia spring beauty showed. Does the Rocky Mountain spring beauty have as diverse chromosomes as Virginia spring beauty? Apparently not. All plants studied have 16 chromosomes. Why are relatives so different? Good question!

Colorado loco, although in the pea family, is toxic, the "loco" referring to the behavior of livestock that ate very much of it.

Larkspurs are toxic also.  Many larkspurs are for sale as garden plants, called either larkspurs or delphiniums. Whether American or European, they are all poisonous. Fortunately they don't look like anything people ordinarily eat. If you leave them alone, they won't hurt you.

The name puccoon is a Virginia Algonquin word for a dye plant. It was what they called an eastern species of Lithospermum. The roots of fringed puccoon are reported to have made a blue and violet dye for Great Basin and Montana Indians.

Creeping barberry berries were a famine food of Native Americans in the west, edible but unappealing.

It was a beautiful day to look for wildflowers! 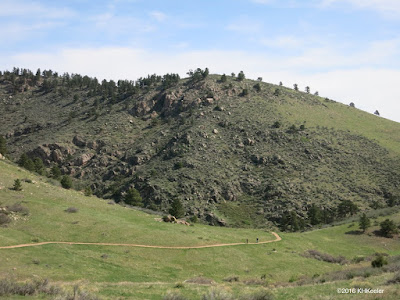 Posted by A Wandering Botanist at 12:48 PM