Plant Stories: Peonies from the Orient 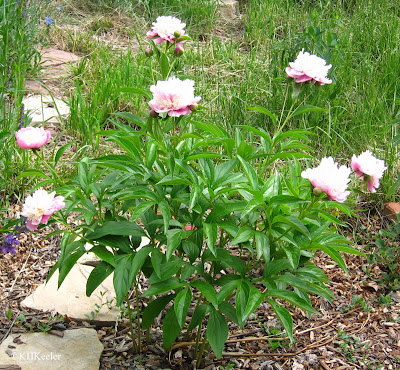 Peonies! Wonderful big flowers and a rich scent. No wonder they've been favorites for millennia.

Peonies are plants of the genus Paeonia. It is the only genus in the peony family, the Paeoniaceae. There are 33 species, very like each other and not like much of anything else. They have an odd distribution: two species are native to the western US, a few species are found in southern Europe and across Asia but most peonies are native to eastern Asia.

The Chinese have been cultivating peonies for more than 3,000 years (written records from the early Zhou Dynasty (1046-256 BCE)), creating hybrids, doubles and new colors. The Chinese particularly liked tree peonies (mǔdan), which are native only to China and available but not particularly common elsewhere. But they also loved herbaceous peonies (sháoyào). 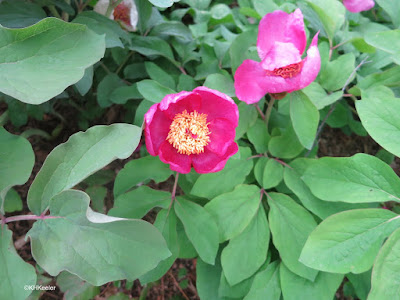 The Chinese Book of Odes (7th or 8th century BCE) included a poem which, at the end of each stanza, described couples exchanging peony flowers (sháoyào). The properties ascribed to peonies, as binding herbs, probably played into choosing them to exchange, adding symbolism (or magic) that strengthened relationships. Or so says Needham. I can read it as some sort of euphemism.


'Beyond the Wei [River],
The ground is large and fit for pleasure .'
So the gentlemen and ladies.
Make sport together,
Presenting one another with small peonies . 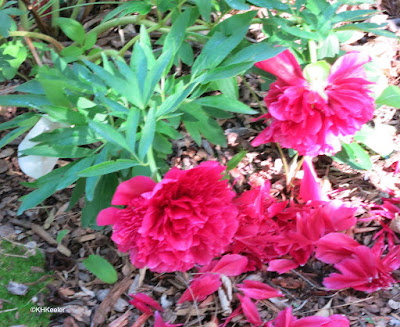 Peonies featured in traditional Chinese medicine, using the roots as a tonic, for their astringency and as a general remedy for diseases in women.

In art, peonies represented spring, with all the symbolism typical of spring, such as birth, rebirth, hope and renewal, and were a frequent motif.

The Tang Dynasty, 618-960 AD, was a period of relative peace and both nobles and commoners took up growing peonies in a big way. The prices commanded by rare peonies could reach the equivalent of a hundred bushels of rice! A famous poem by Bai Juyi (772-846) read in part
"For the fine flower, --a hundred pieces of damask;
For the cheap flower, --five bits of silk."
(from Needham, p. 399)

More than a thousand years ago, the Chinese wrote monograph after monograph, describing the transport, planting, grafting pruning, care of peonies, and more. Peony gardening popularity waxed and waned of course, but hundreds of cultivars were produced.

Sháoyào peonies were introduced to Japan by the 8th century AD, where the Japanese developed distinctive shapes and styles of their own (pictures).

Europeans sent back reports of peonies to Europe almost immediately after reaching China by sea in the 1500s. In the 1780s, Cibot wrote extensively about the beauty of Chinese peonies. He however, expressed astonishment at superstitious practices in their cultivation, for example transplanting only at the correct phase of the moon and waiting for auspicious days for other garden tasks involving peonies. (European peony superstitions next blog post link ).

The earliest known Chinese peony plants to actually reach western Europe arrived in 1784, by way of Siberia and Russia. Other imports very soon followed. Europeans embraced them as wonderful "thornless roses." By 1884 hundreds of varieties were available in England.

"Writing about [860 AD], Li Chao said: '
'The nobility and gentry of the captiatl citiy have been making excursions to admire the peonies for about thirty years past. Every evening in spring-time the carriages and horses take madly to the roads, it being considered shameful not to spend some leisure in enjoying them.'"
(Needham, p. 399)

Take madly to the roads and enjoy the peonies! 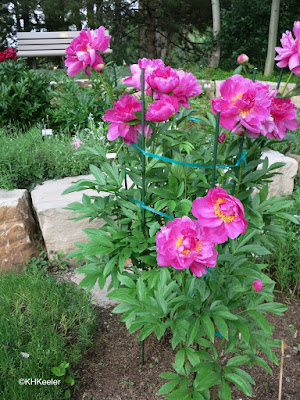 Buy the Book! Give it as a gift! This story and thirteen other plants from around the world are told in Curious Stories of Familiar Plants from Around the World. Available on Amazon link

Kathy Keeler, A Wandering Botanist
More at awanderingbotanist.com
Join me on Facebook

Posted by A Wandering Botanist at 1:23 PM