Its always a joy when the peonies flower! 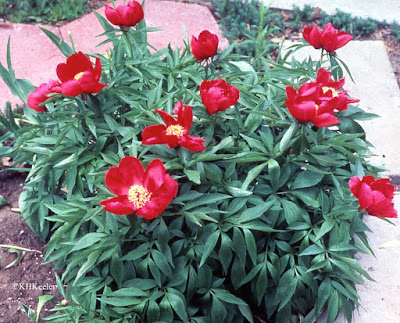 Europeans have been using two of their five native peonies, the female peony Paeonia officinalis (link) and the male peony P. mascula (link) medicinally for millennia.

It is not obvious today why they are called male and female. It does not reflect the botany. Both are male, in the sense of having pollen (sperm) and both are female, in the sense of having eggs within ovules that develop into seeds. In both species, both "male" and "female" function occur within the same flower (hermaphrodite flowers). Furthermore that explanation is relatively recent--that plants did any kind of sexual reproduction was one of Linneaus' absolutely shocking suggestions in the late 1700s. Peonies were called male and female long before that. 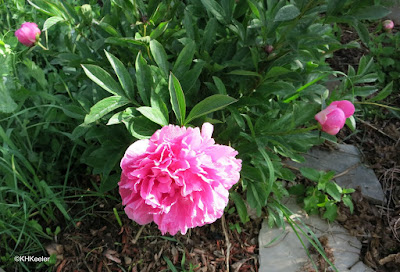 The Bynums in Remarkable Plants suggest that the designation reflects the relative size and vigor of the two plants, male peonies being larger than female peonies.

Female peony was the plant of choice for European herbal medicine since the time of Dioscorides (64 AD), and it was used for both men's and women's problems.

Any other significance seems lost to history. Today those are just the common names for the plants.

The name peony itself comes from ancient Greece. It is certainly named after Paeon, physician of the gods and god of healing. I can't confirm the more dramatic tale, often repeated, that the Greek god of medicine and healing, Asclepius, became dangerously jealous of his student Paeon and Zeus protected Paeon by turning him into the (important medical) plant, the peony. Sites talking about peonies give that story, but not sites about Paeon or Asclepius. 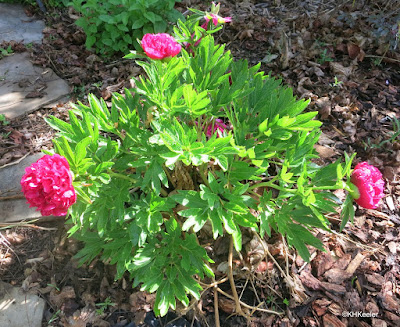 Peonies, especially the female peonies, were important medicinal plants, used for an array of conditions, especially the falling sickness (epilepsy or other seizures). Today they are not generally recommended because of the risk of overdose, which causes severe digestive discomfort and diarrhea, and because many of the traditional usages are, in the phrasing of the Physician's Desk Reference for Herbal Medicine, "unproven."

As a common important medicinal, peonies accumulated a lot of folklore. I went looking for the source of the stories or a definitive statement.

Thomas Hill, writing the first English language garden book in 1577, wrote that if peonies are "buried or otherwise sown" around the edge of the garden, the plants "are after (as by a secret protection) preserved, that neither the great nor smaller beasts will after spoile the plants there growing." (p. 117) Whether this has any basis I don't know. Peonies appear on deer-resistant lists (but also on lists of plants deer like link) but that is not the same thing as creating a fence that keeps beasts out. 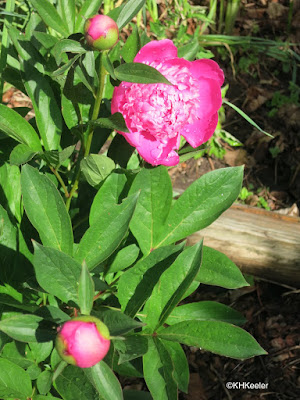 Some years later, John Gerard published his The Herball. Written and revised between 1599 and 1632, is a very famous compendium of plant information, known for including plants with no medicinal value and skepticism about the more fantastic stories of his day.

Gerard wrote (I modernized the letters and the endings, saith to said for example):

"There be found ... Aglaophotides [it means approximately "brightly shining"] described by AElianus in his Book 14 ... That of the earth, said he, which by another name is called Cynospastus, lies hid in the day time amoung other herbs and is not known at all, and in the night time is easily seen, for it shines like a star and glitters with a fiery brightness.

"And this Aglaophotis of the earth, or Cynospastus, is Paeonia; for Apuleius says, that the seeds or graines of Peionie shine in the night time like a candle and that plenty of it is in the night season found and gathered by the shepherds. Theophrastus and Pliny do show that Peionie is gathered in the night, which AElianus also affirms..."(Gerard, p. 983)

My peonies are mostly doubles, but I have never thought they shone in the night. The white ones are very visible in the dark, but not more so than white roses. Certainly they did not shine like a candle. I'll check again when there are seed pods. Look for yourself and let me know!

"...AElianus said that Cynospastus [peony] is not plucked up without danger and that it is reported how he that first touched it, not knowing the nature thereto, perished. Therefore a string must be fastened to it in the night and a hungry dog tied thereto, who being allured by the smell of roasted flesh, set towards him, may pluck it up by the roots. Iosephus also wrote that [peony] does shine in the evening like the day star and that they who come near and pluck it up can hardly do so, except that either a woman's urine or her menses be poured upon it, and then so it may be plucked up at length.

"Moreover, it is set down by the said Author, as also by Pliny and Theophrastus, that of necessity it must be gathered in the night, for if any man shall pluck off the fruit in the day time, being seen of the Woodpecker, he is in danger to lose his eyes; and if he cut the root, it is a chance if his fundament [buttocks or anus] fall not out. The like fabulous tale has been set forth of Mandrake, the which I have partly touched in the same chapter. But all these things are most vain and frivolous: for the root of Peionie, as also the Mandrake, may be removed at any time of the year, day or hour whatsoever." (p. 983) (see original: link)

I cannot find an online translation of either Theophrastus or Aelian to compare, but Fraser, Folklore of the Old Testament, further reports that the dog that is used to pull up peony roots will die with the first light and should be buried where it falls--with certain secret rites--after which the gatherers could safely handle the peony roots. (link) That probably comes from Aelian although I can't confirm it. 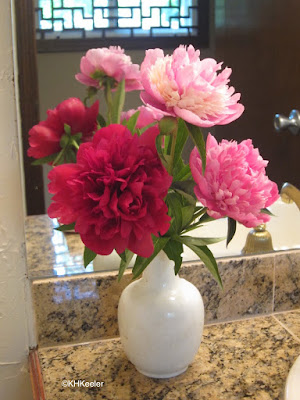 By 1780s Cibot, visiting China, wrote disdainfully of their peony superstitions (previous blog). It would be fun to know how European fears of peony harvesting were lost. Gradually? Probably not simply because Gerard said so.

China and Japan had more peony species and had for hundreds of years cultivated them as importnat ornamentals so when Asian peonies were introduced into Europe in the 1870s they were a hit, rapidly adopted for gardens all over Europe (and North America and beyond). In addition, the Chinese herbaceous peonies were hybridized with the female peony, Paeonia offinalis, creating greater diversity of color and shape.

North America has two species of peony, not readily available. In Defense of Plants talks about them: link. There are likewise species in Europe and Asia only known to specialists.

Even without the rarer species, there are more colors and forms of peony easily purchased than one yard can reasonably hold. Consider these: yellow, lavender, black, single,  double. They are still a hit, and are generally transplanted safely in daylight.

Buy the Book! Give it as a gift! This story and thirteen other plants from around the world are told in Curious Stories of Familiar Plants from Around the World. Available on Amazon link

Posted by A Wandering Botanist at 12:21 PM