This was Pollinator Week.
I hiked in Rocky Mountain National Park, taking time to watch the pollinators. 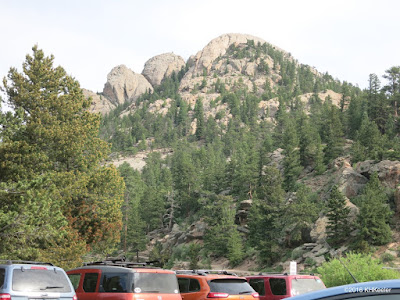 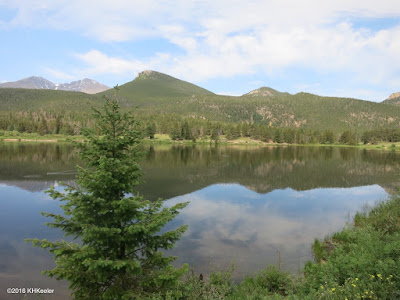 The wet spring gave many plants the resources to flower abundantly. Lots of flowers just waited, no pollinator in sight. 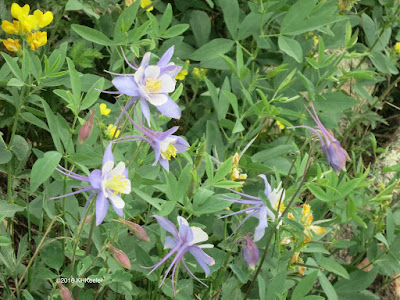 But often I did see flower visitors.

Not all insects on flowers are pollinating. They could be sunning themselves or be predators hoping to catch an unwary bee or just be on some other errand of insect business. Even excluding all of those, many flower visitors are not pollinators. They can be too large or too small for the flower. In Richardson's geranium (Geranium richardsonii, geranium family Geraniaceae), (photo below) in the center of the flower is the cluster of anthers with pollen in them (pale-colored "fingers"). Underneath them is a small solitary wasp, dark-colored. The wasp is reaching into the Richardson's geranium's nectaries to get nectar (sugar water) but by going under the anthers it is not likely to get pollen on its body, so even if it goes to another Richardson's geranium flower, it probably will not carry pollen and brush the second flower's stigma, pollinating. Many flower visitors feed on nectar and pollen but are not effective pollinators.

In other cases where the match of insect and flower isn't particularly good, pollination probably still happens. Below, you are looking at the black pointy butt-end of a beetle (see the antennae to the right?) on a flower of American bistort (Bistorta bistortoides, buckwheat family, Polygonaceae). The beetle is feeding, probably on pollen as much as nectar. But it lumbers from one flower in the cluster to the next. Note how the floral parts extend outside the flowers (white pin-head shapes are stigmas to receive pollen, yellow dots are anthers with pollen)? This clumsy flower visitor will likely bump pollen onto stigmas. Assuming there is no chemical block to pollination between flowers of the same plant in this species (and note that it is likely between different flowers even though it is within the same plant), pollination will happen,

Likewise, the fly on the rose flower at the beginning of this post will probably knock pollen onto the stigma. Flies are not great pollinators. Great pollinators go directly from one flower of a single species to the next. Flies wander around visiting flowers of several species, leaves, dead animals, whatever catches their attention, so lots of pollen never gets to another flower of the same species. But flies are abundant so many plants are structured so they can be pollinated by flies. Specialized pollination is wonderful when it works, but the plant cannot control the factors that limit pollinator numbers, so many plants are pretty unspecialized: if it walks around on the flower, it'll cause pollination.

Many studies have shown that better seeds are produced if the pollen comes from a different plant (genetic individual). In plants just as people, inbreeding (breeding with a close relative and what could be closer than the plant itself?!) often reveals undesirable genes. However, some seeds are better than no seeds, so while many plants have mechanisms, chemical or physical, encouraging cross pollination, often those break down after the flower has been open a long time--six hours or three days whatever is a long time for that particular flower--allowing self-pollination.

The chokecherry (Prunus virginiana, rose family, Rosaceae) flowers below will probably be pollinated the big fly. The grouped flowers enable the fly knock pollen from one flower to the next.  Visitors like the butterfly in the second picture will probably carry pollen between planets. If each small flower needs pollen moved onto the stigma, then many pollinator visits lead to lots of seeds. Some pollination within the plant and some between plants will create genetically diverse seeds for the chokecherry.


Bumble bees are excellent pollinators: fuzzy (so pollen attaches well), smart and strong. On this monument plant (Frasera speciosa, gentian family, Gentianaceae), the flowers are open and easy for the bee to access. On the other hand, open flowers are scattered around the plant, so the bumblebee moves around seeking nectar. This was an isolated plant, but in a group, likely the bumblebee would move between plants looking for an open flower, causing cross pollination. Bees, bumblebees included, are capable of liking a particular plant species and spending the morning ignoring the flowers of all other species to go to that one. That makes cross pollination more likely and bees great pollinators.

Below, a bumblebee visits golden banner (Thermopsis rhombifolia, pea family Fabaceae). This bright Rocky Mountain plant has a characteristic pea-family flower that excludes many flower visitors. The nectar is inside, protected from dilution in rain for instance, but also unreachable to most flies and butterflies.

The bumblebee landed on the split, horizontal petals of the flower. Its weight caused the petals to drop, opening a space where it could reach for the nectar. As it reached, golden banner sticks pollen on its underside.


In the next flower, more pollen is stuck in the same place but some comes off onto the stigma of the second flower, pollinating that flower. This system works well with bees that are big enough to press the horizontal petals down, and keeps out most other insects. In the photo below, if you look carefully (enlarge the photo by clicking on it) you can just make out the bright orange anthers full of pollen underneath the bumblebee. (Stop to open some closed flowers and see for yourself: flowers of golden banner, sweet peas, or snapdragons from example).


I didn't see honeybees, hummingbirds or night-flying moths, all of which probably visit flowers here. And my gallery of pollinator pictures missed most of the insects I saw: small pollinators like flies, butterflies and little bees are wary--edible!--and not easy to photograph.

When you walk through a flowery meadow, realize that all the brightly colored flowers are advertising for an animal pollinator to come by to carry pollen between flowers. It is hard to personally observe that pollinator numbers are down, but people who have recorded what they see over the last half-century can show us that that is the case. The causes probably include habitat destruction (expansion of roads, agriculture and suburbia) and pollution from many sources including pesticides. This is Pollinator Week, a good time to look at your neighborhood or local park and wonder where in that cultivated, groomed area pollinators can safely nest and where they will find the flowers they feed from. I see a lot of space that could be pollinator habitat rather than a mowed, weed-free lawn. I hope our increasing awareness of pollinators is the first step in making those changes.

Step quietly amid the beautiful flowers and watch for pollinators.

For more information:
U.S. Forest Service. What is pollination?  pollination Nice review
Mondal, P. 2015 Pollination in plants: types, advantages and disadvantages. link More depth.
Pollination biology. University of Wisconsin.  link Pretty illustrated slide show
Note:
Plant names are according to J. Ackerfield, 2014. Flora of Colorado. BRIT Press, Fort Worth, TX, except for the common name of Frasera speciosa which she gives as elkweed and most other sources call monument plant. My other change is to call the boulder raspberry (Rubus deliciosus) by that common name, not the delicious raspberry as Ackerfield does, because, despite the scientific name, sources all agree it is tasteless.

Posted by A Wandering Botanist at 12:03 PM