Hawaii is an island chain in the middle of the Pacific Ocean, about as far from a continent as you can be on our earth. The islands were never part of a continent, they were created by a mid-Pacific volcanic hot spot forcing lava up to toward the surface. The ocean is 19,000 feet deep in that area, but the push from below is persistent: it built islands that not only emerged above the ocean surface but that reach heights of more than 13,000'. The two tall volcanoes on the Big Island, Mauna Loa and Mauna Kea, are both taller than Mt. Everest (29,005') if you count from the sea floor (30,085 and 30,196' respectively.)

That combination of history and isolation makes Hawaii the hardest place for plants and animals to colonize. Botanists estimate that only 290 plants ever made it on their own. They have to have survived drifting in floating debris for weeks, or clung as living seeds to the feet of birds on a long-distance flight or, in the case of the tiny spores of ferns, ridden a storm wind and landed not in the sea but on a tiny bit of land. 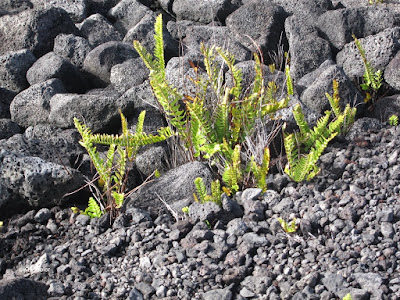 Once there, growing conditions on wetter coasts of Hawaii are wonderful: warm sunshine, frequent rains. 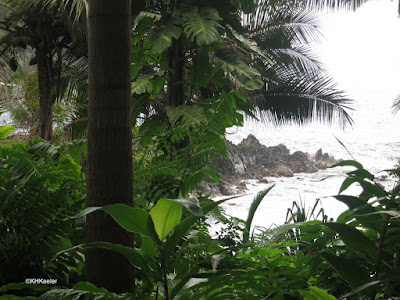 If the plants that arrived could reproduce, they were in luck. Possibly many plants that arrived and sprouted on Hawaii left no descendants because they were self-incompatible. People are "self- incompatible". A single individual could live out his or her life comfortably on a distant island, but would leave no population of children behind. For animals we imagine pregnant spiders and songbirds swept up by a storm. The arrival of a pod full of ripe seeds is certainly be one way a plant population could begin. The catch is: salt water quickly kills most seeds. 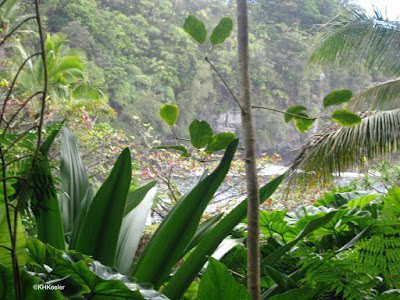 Some plants can root from branches or expand as a clone with several trees or shrubs off the same root system, which gives them the option to spread a bit without seeds. Another group of plants are "self-compatible": their own pollen can fertilize their own eggs, so they can make seeds with themselves, sometimes without a pollinator, sometimes requiring an animal to move that pollen. Whatever the breeding system of their ancestors, the 290 Hawaiian colonists were able to reproduce effectively after they reached Hawaii.

Hawaiian botanists count about 1,030 native species, the result of the 290 colonists spreading across the islands and adapting to the diverse condtions (1030 endemics, found nowhere else). And diverse Hawaii is! Elevations range from sea level to 13,803 feet. At sea level the temperatures are in the 70's and 80s year round, at higher elevations there is frost and snow. The mountains of Kauai include one of the wettest spots in the world (Mt. Wai'ale'ale where 683" inches of rain fell in 1982) but the windward sides of the other islands are pretty wet too (Hilo is the wettest city in the U.S. at 126" of rain a year). On the dry west sides of the islands, it barely rains: annual rainfall in Kailua Kona is 18", Kahuli on Maui 17.8" and Honolulu 17.1". Thus, as plants spread, they encountered quite different environments, which led to adaptation to the new habitats and eventually the formation of new species.

Here's a look at some of those habitats:

Where there is rain, tall wet forest grows. The picture is from the Big Island, but all the other islands have wet areas near sea level rich in vegetation. 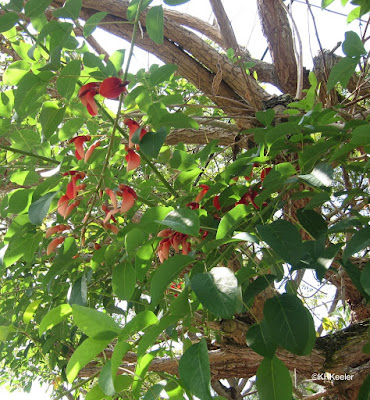 At middle elevations there are wet forests, but the temperatures are cooler and the plants are different.

On the Big Island the volcanos are active. Lava flows bury forests in what can be 30 or more feet of lava that cools into rock. Then it is a broad expanse of new rock, making opportunities for seeds. The natives plants of the Big Island are amazing in their ability to flourish on what looks like bare rock.

The lava from the Big Island's volcanos sweeps a swath of devastation all the way to the sea. Sea level communities vary a lot depending on how much rain they receive (and, on the Big Island, how recently they were covered in lava).


All the islands have dry sides, great for tourists because it is usually sunny. In the tropical heat near sea level, 17 or 18" of rain a year doesn't go very far: the native vegetation is specialized and grows slowly. (The cacti along the fence in the foreground below were brought in from Central America).

The island of Maui is older than the island of Hawaii, Oahu is older than Maui, but Kauai is the oldest of the main islands. Kauai's last volcanic eruption was about 5 million years ago, it has been eroding since. Its highest point is now only a little over 5,000'. In comparison, the Big Island is less than a million years old. Plants have had much more time on Kauai. There they grow in deeper soils, are not troubled by lava flows and have had time to adapt to specialized habitats.

People have brought beautiful tropical plants from all over the world to the Hawaiian Islands, but there are stunning native flowers as well.

Hawaii is working hard to conserve its native plants. Those 1,030 Hawaiian endemics are found nowhere else in the world, so protection is critically important. Increasingly people are landscaping with natives, a good thing all around.

When visiting Hawaii, look for the habitat diversity and the native plants, as well as enjoying the wonderful weather and dramatic introduced flowers.

Posted by A Wandering Botanist at 12:42 PM