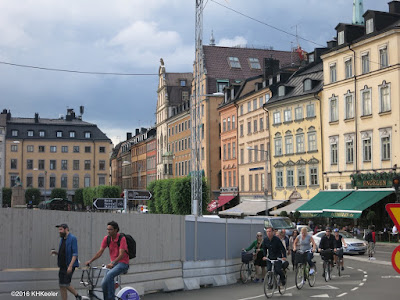 Stockholm is the capital of Sweden, a major city with a population of almost 800,000. How is that a botanical destination?

Well, as soon as you get more than, say, 100 miles from home, the plants start to change because the climate (and soil or both) change. By the time you hop half way around the world (Denver to Newark, 4 hour flight, Newark to Stockholm 7 hours more) the native plants are almost entirely different. Recognizing a plant is exciting!

There are green trees and green lawns in a city like Stockholm, so it seems familiar. But when I looked more closely, most of the plants were different. Distance--being on opposite sides of an ocean, for example--is important in making different areas have different ordinary plants but climate plays a big part too. In Stockholm it was light until nearly midnight although the sun was very low by then and although the days were sunny the highs rarely topped 80 F. Several nights, it rained. In Colorado while we were gone, most days were over 90 and there was one brief thunderstorm. Plants that do well in the cool moisture of Stockholm are just not the same plants that grow well in the intense dry heat of midsummer Colorado.


Lawns and city trees are planted, so of course the flowers in the planters are the choice of local gardeners. Some were in fact American plants, such as the colorful box of portulacas (Portulaca grandiflora) from South America, and the gaura (called beeblossom, Gaura lindheimeri) native to the south central United States.

Most, though, were European ornamentals that I had seen before but that are not commonly grown where I live (Because the climate differs, mainly).

So the botanical tourist revels in whatever plants are there. Familiar? Good to see old friends. Unfamiliar? Ooh, something new!

Stockholm had many lawns. People planted grass and into that grass moved weeds. Stockholm’s weeds were mostly familiar to me, but in Europe they were at home, not "aliens"! Plaintain (Plantago major, pictures in previous post), red clover (Trifolium pratense, pictures ), daisy (Bellis perennis, pictures), the small speedwell (Veronica sp., photos plantain family Plantaginaceae): these plants are all European natives that have been introduced to the United States. Europe is their home. Seeing them in the lawns of Stockholm, I was led to wonder if they had moved from wild disturbed areas to grow in lawns while living in Europe and followed lawns to North America. I always imagined it in the other order, that they came to North America and discovered lawns here.

Just because these plants are familiar lawn weeds doesn’t make them any less European wildflowers, to notice and appreciate.

I also saw an American plant as a lawn weed, the common evening primrose (Oenothera biennis). It seemed clear that this plant had escaped from gardens. North America can give Europe weeds, just as Europe gave North America weeds. It is true that more have gone from Europe to North America than the other direction. There are ecological reasons for that, but in addition, certainly the number of people who moved from Europe to North America, taking along their favorite plants and a few stowaways, far exceeds the number who have moved with their plants in the other direction.

Stockholm’s trees were taller than those of the Front Range in Colorado. They get more rain and  experience higher humidity from the proximity of the Baltic Sea: better conditions for trees. Those I saw in Stockholm were mostly European natives: horse chestnut (Aesculus hippocastanum link), lime (Americans would say linden, Tilia (there are several European species) link), weeping willows (Salix babylonica link), and the tree below, probably European aspen, Populus tremula to name a few. Beautiful trees! They were easy to recognize as "chestnut" or "linden" but not the same species as seen in the U.S. (except, of course, that they have been introduced to North America). The similarities to American species reflect the long linkage of North America and northern Europe as parts of the supercontinent Laurasia, lasting until about 55 million years ago, recent enough for recognizable shared plant groups, old enough for distinct species to form on the two sides of the Atlantic. (maps)

But a botanical visit need not stop there. Stockholm has wonderful sights and museums: history museums, art museums, the Vasa Museum (the 16th century ship that sank in the harbor and has been raised and restored), Skansen (an amusement park and living history museum) to name a few. I found gardens in many places. 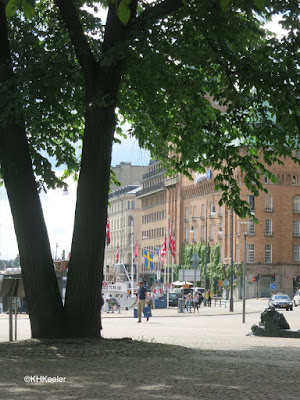 The Historiska (the history museum) had many displays relevant to the Viking era (about 700 to 1050 AD) (and of course to the rest of Swedish history, fascinating!). In their central courtyard they had planted a food and herb garden of Viking-era plants, including foods such as broad beans (fava beans, Vicia fava, pictures) and turnips (Brassica rapa, pictures), and medicinals such as wormwood (Artemisia absinthum pictures) and lavender (Lavendula sp., pictures). They emphasized connections to Greece and the Mediterranean since much of the raiding and trading done by Swedes in the Viking era carried them east and south, first into what is now Russia and then to Constantinople. Wormwood, lavender and basil (Ocimum basilicum, pictures), for example, were brought from the far south. 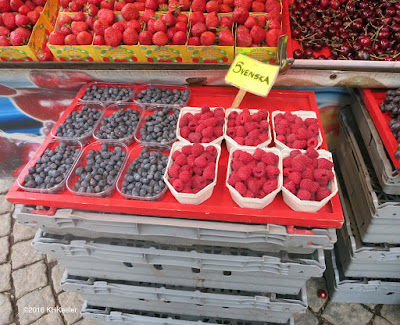 -to be continued- link

Note: I originally listed the families of all the plants I mentioned, but it really interrupted the text. So instead I am relying on the links to pictures and your ability to google to let you recognize the plant if the name doesn't conjure up an image. The convention of including what family a plant is in is in case you don't know the particular plant, you might know a relative. "In the willow family" means "it is closely related to willows" and gives quite a different image than "it is related to beans."

Posted by A Wandering Botanist at 12:52 PM