Our trip to the big city of Stockholm, Sweden, turned into a botanical tour as well (link to last week). Here are some more of the pleasures of botanizing in a city.
The Vasa Museum is the very famous Stockholm museum housing the ship the Gustav Vasa, a sailing ship that sank in Stockholm harbor in 1628 on its maiden voyage and that, 333 years later, was raised, restored and provides a wonderful glimpse of the time (link). I had seen the museum in 1969 and 1987 but enjoyed it mightily this time too. One engaging addition was a series of videos on the situation elsewhere in the world at the time--I didn't know that at that time the Ming Dynasty in China was being defeated by the Qing (link) or that the Vasa was concurrent with the Mughal empire in India (link).

AND, the Vasa Museum curators had created a garden of plants typically used when the Vasa sailed. I certainly never saw the garden in my previous visits. It is close to the doors to the museum, but not particularly obvious. The little garden featured food plants such as broad beans (Vicia fava) and kale (Brassica oleracea), and medical plants like St. Johns wort (Hypericum perforatum), comfrey (Symphytum officinale), and opium poppies (Papaver somniferum). The flax (Linum usitatissimum) was in full bloom. Flax was grown for flax seeds and the linseed oil produced from them and the stalks were processed into linen. Today there are specialized varieties of flax for each purpose, but that was probably not the case in 1628. I was surprised the flax was so short: turning those little stalks into thread would have been hard work. But all linen production is hard work, because you have to strip the outer layers off the strong central fiber, a process of rotting and pounding, before you can begin to spin.( more on making linen thread).


I also liked the way the peas and broad beans were staked--simple and practical in the 17th century or today. Note the figure in 17th century clothing on the wall behind the peas!

An easy subway ride north—entertained by the artwork in the subway tunnels (images)—we found the University of Stockholm’s botanic garden.

The walk between the subway station and the botanic garden was a delight. It was a cool morning with pleasant sunshine. Gardens, weeds and wildflowers were flowering.

In Stockholm I saw four different species of mullein (Verbascum, figwort family, Scrophulariaceae). The weedy common mullein, V. thapsus, and moth mullein, V. blattaria, also weedy, are found in my region, but I saw two others I didn't know. Isn’t this one spectacular?!
There are perhaps 250 species of mullein, so I can only guess that this is showy mullein, Verbascum speciosum (link). My picture makes them look like weeds, but they were in fact growing at the top of a steeply sloping private garden.

As we ambled down to the botanic garden, we were surrounded by wildflowers since the path lay between a rocky outcrop and the subway tracks. For example I saw a bramble (Americans might say blackberry, Rubus species) the fruit abundant but not yet ripe, and willowherb (Americans call it fireweed, Europe's rosebay willow herb is Epilobium angustifolium). In both cases these were European species but recognizably similar to American plants. I suppose that I had the reverse experience of European settlers to eastern and northern North America, joy at finding plant species very like those from home.

The University's botanic garden had gardens of plants grouped by plant family (with examples unfamiliar to me), of medicinal plants, of dye plants, for characters such as pollination type...all kinds of glorious flower beds. It was the first place we visited in Stockholm where the signs weren’t both in Swedish and English. The scientific names let me recognize the plants and I enjoyed reading off Swedish names for the plants: gullskära for cosmos, vejde for woad (Isatis tinctoria), tigeröga for coreopsis, bergpion for peony (Paeonia officinalis). Early July is a lovely time: lots of plants were in full bloom.

All the outdoor gardens were free. For a small charge we visited the conservatories, glass houses with plants more exotic in Sweden. They had an excellent collection of dramatic tropical species and economically important plants. 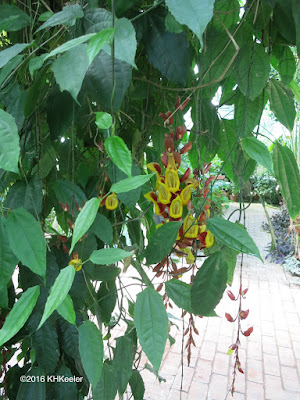 But, of course, I particularly liked the plant with stinging hairs so painful that they put it into a glass case by itself. I imagined that small warning signs, then big warning signs, that still resulted in people not being able to resist touching it.
Then, for this post, I tried to determine what plant it was (I didn't see a scientific name, so worked with the common names, Swedish and English, on the sign). I believe it is an Australian stinging tree, perhaps gympie stinger, Dendrocnide moroides. Gympie stinger has hairs which cause so much incredible, long-lasting pain that perhaps they put it into the case the day it was brought into the conservatory. (Read about gympie stinger link--impressive sting!).

But of course you can see Swedish plants as well as Australian ones in Stockholm. From your Stockholm hotel you can easily visit quite natural areas of Swedish vegetation. Stockholm is a port on the Baltic Sea that has grown around Lake Mallaren and whose suburbs now extend out onto a very complex archipelago of islands. It is simple to take a half or full day cruise out among and onto the islands. 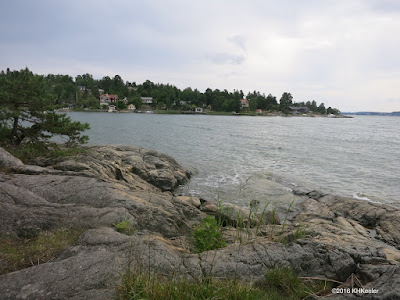 Very quickly you are in Scandinavian forests, with tall pines and an understory of ferns and wildflowers. 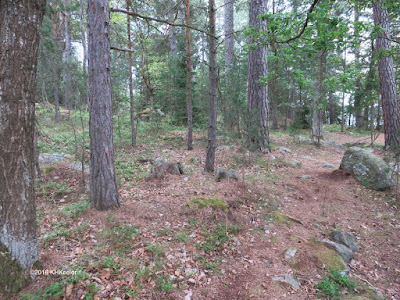 Below, a big patch of lily-of-the-valley (Convallaria majalis), native here! It was an extensive clone, but, alas, mostly past flowering.

The cruise on the ship was great fun, the commentary (in Swedish and English) described what we saw and then, ashore, we strolled around a forested island before catching the ship back to downtown Stockholm. An intriguing glimpse of wild Sweden. 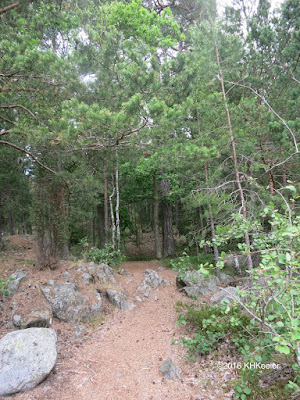 And there was more, for example, gardens and demonstrations of traditional useful plants at Skansen and a busy biodynamic garden (Rosendals) on Djurgården Island beyond Skansen.

There are botanical delights everywhere, you simply have to open your eyes to them.

Posted by A Wandering Botanist at 1:28 PM