Plant Story--Thyme and Its Folklore

Having a lot of thyme is joy. Grow some and see.

Thyme is a small mint (mint family, Lamiaceae) with the scientific name Thymus. The thymes are from Eurasia where there are some 350 species.

Humans have liked the scent for a very long time. The oldest report of thyme use that I could find is apparently in the Ebers Papyrus, from ancient Egypt about 1550 BCE (more information) where it was used medicinally.

Several species of thyme grow in the hills of Greece. Ancient Greeks, liking the fragrance, used thyme freely, especially as an important ingredient in incense. The name thyme is from Greek,
variously described as derived from the word for incense (thymiama), the word for incense burner (thymiaterion), a word for a perfume (thuo), and/or the word for courage/bravery (thymos or thumus).

When you wonder how a plant got its name, you have to imagine a time when local people recognized the plant but didn't have a particular word for it. People could gather and use a specific plant as incense long before they had a name for it. Likely, when someone had to direct a helper to get more of it, they called it some version of "incense plant" which became the word thymus.

What is the association with courage? Maybe that was the plant's name, but I think it more likely convergence: thymus sounded like thymos, so of course you'd want to use a plant whose name sounded like courage or make a pun as you tucked a sprig into your champion's armor.

Certainly the Greeks--and cultures after them--associated thyme with courage. Athletes applied thyme or oil of thyme to their bodies to enhance their courage. "To smell of thyme" was a Greek comment of high praise according to Mrs. Grieve (link). (I can't confirm that, beyond the fact that the fragrance of meadows of thyme was a positive image in the classical Greek literature online.)

Exactly which of the species of thyme were used by the Greeks is difficult to determine. Common thyme, Thymus vulgaris, is native to Greece, but several species of creeping thymes, for example Thymus serpyllum, are native to northern Europe and were not known to the Greeks. However, the Greeks and Romans called thyme "serpyllum." The word serpyllum was applied to a number of species of thyme during the last 2000 or more years, and it was formally given by Linnaeus as the scientific name for a northern European plant that doesn't grow in Greece. Historically important plants are often quite confused like this.

That name, associating thyme with creeping things, especially snakes, led to its own set of folklore. Odo of Meung in northern France, writing as Aemilius Macer, wrote, in the 11th century:

"The smoke of thyme drives away all serpents and all other beasts that cast venom out through their mouths. Therefore, it is the custom for reapers to mix thyme in with their food so that such venemous beasts would flee from them and do them no harm if they happened to fall asleep from weariness." (p. 27)

This association with protection from snakes goes back at least to Pliny (23-79 CE) (link). 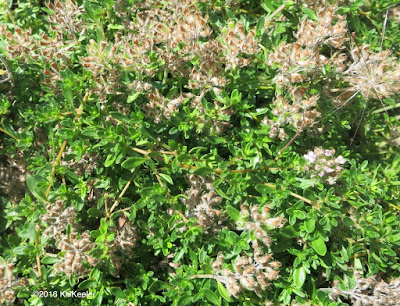 Other groups added to thyme folklore. Christian mythology reported that thyme was in the hay  in the manger of the bed for the infant Jesus and that, consequently, it has had a wonderful scent ever since.

In late medieval and early modern Europe, wild thyme was one of the plants under the control of fairies. It was therefore dangerous to bring it into the house because it would let in the fairies. I don't have a lot of sources on fairy folklore but apparently fairies loved thyme and were attracted to it. In particular they would gather and dance upon lawns of wild thyme on midsummer's eve. This prospect was wonderful or horrifying depending on your attitude toward fairies.

Thyme has antiseptic properties. Medieval use of plants rarely distinguished between the outer and inner person: the same remedy was applied to the skin or taken internally. Consequently, people ate thyme to prevent illness, rubbed it on their skin to ward off disease and carried sprigs of thyme to protect themselves from plague or leprosy.

By Culpeper's time (early 1600s) thyme, both garden thyme and wild thyme, was touted to expel phlegm and worms of the belly and for headache, including headaches due to inebriation. Culpeper reported wild thyme was "a certain remedy for that troublesome complaint, the night-mare." (Culpeper online)

All the thymes contain thymol, which is an effective antiseptic, so it kills intestinal worms and disinfects. You can see those uses going back to the Greeks and Egyptians. Today it is used in mouthwashes, various skin lotions, aromatherapy, chewing gum, candy and the liqueur Benedictine, to name a few products. Thymol was a very important antiseptic before World War I, but because most of it was produced in Germany, the English speaking world had to find substitutes during the war and never went back.

Its role in making people braver was not forgotten after classical Greece: Medieval ladies reportedly embroidered a sprig of thyme and a bee into the favors they gave their knights. In a soap it was thought to cure shyness, perhaps an extension of that idea. 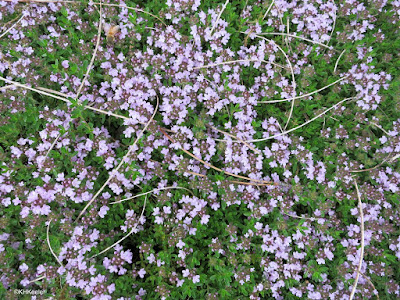 Beyond its medicinal uses, it has been a strewing herb--scattered on the floors--to make rooms smell fresh since the Greeks. By the 1800s, bringing wild thyme (T. serpyllum) into a British house was so unlucky you could expect a member of the family to experience a serious illness or even die. Perhaps the this is not a contradiction and garden thyme was safe to bring in but not wild thyme. Or perhaps beliefs changed after people stopped using plants as floor coverings. (About strewing herbs: link link I don't know where they got their lists of plants since neither include thyme, though sources on thyme history frequently describe it as a strewing herb.)

Of course a plant whose scent people liked was used a food and drink flavoring. Both the leaves and flowers have been added to food throughout European history.

Bees love it. (See video in Thyme Lawn post). This too has been known since ancient Greece. Indeed, in antiquity abundant flowering by thyme on the hillsides of Greece was recognized as predicting a good crop of honey.

A fine group of plants, the thymes. Everyone needs more thyme. 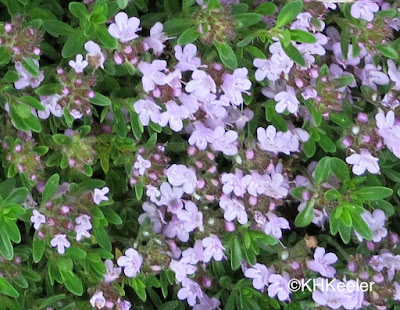 Note: I assert above that medieval herbals often used the same herb externally and internally. Separating the inner and outer person seems to have gradually emerged. There are some "use either externally or internally" in Culpeper, but many in  Macer 500 years earlier (e.g. germander, "drunk in wine will guard against deadly and venemous bites...and is good for the same causes if it is pounded into a plaster and laid on."p. 79).