Crocuses are one of the very first plants to flower in the spring. I saw one in my neighborhood on February 23, 2021, but then we had 3" of snow. Those plants rebounded with new flowers within a few days but remained the only flowers in my neighborhood. My own yard's first crocus was on March 2 (see above). Spring!

Crocuses are neat little plants with surprisingly little history and folklore. We use the same word for the common and scientific names, crocus. You can make the plural croci, in the Latin fashion, but I've only ever heard people say crocuses.

The genus Crocus has more than 100 species, native from Spain to China. These are little plants--rarely 6" tall--which grow from a bulb (technically a corm, a short solid underground stem with thin leaves). The flowers come out in the spring before the leaves. The leaves are very grass-like, but often with a lighter stripe down the center. After flowering and developing seeds, crocuses go dormant, their leaves turning brown and dying, so they are invisible during the summer and fall.

The crocuses grown in gardens as spring flowers are mostly the Dutch crocus, Crocus vernus, "crocus" C. luteus hybrids, and the snow crocuses, C. chrysanthus and C. tommasinianus.  (In Latin, the species epithet vernus means spring, luteus and chrysnathus are two ways of saying golden and tommasinianus honors botanist Muzo de Tommasini (1794-1879) of Trieste, part of the area to which the plant is native.) The Dutch crocus has that name because it was widely cultivated in the Netherlands, not because it is native there. It is native to high mountain areas in Europe. The others came to Europe from the Balkans and the Middle East with the horticulture trade, sometime after 1500.

The crocuses are confusing for two reasons. The first is all the 100 species in the genus Crocus are called crocus in English. The group mentioned above flower in the spring and are strictly horticultural. But another Crocus species, the saffron crocus, Crocus sativus, is the source of saffron and famous in history, going back to the Egyptians. Saffron was so valuable people fought a war over it link. Its flower is a purple crocus flower, but it flowers in the fall. Most places that grow spring crocuses can grow saffron, but it is not a common garden flower in the U.S. This post is about saffron's spring-flowering relatives.

The second confusion is with a group of flowers called autumn crocuses, meadow saffron, and naked ladies. They are somewhat like crocuses, with pink-purple flowers that come out of the ground, not on a leafy stalk. But, despite the name, they are in the genus Colchicum and in a different plant family. Crocuses are in the iris family, Iridaceae, with irises and gladiolas. Autumn crocuses/ meadow saffron/ naked ladies are in the lily family, Liliaceae with plants like the Easter lily and lily-of-the-valley. I'll refer to them as Colchicum because they share the crocus and saffron names with true crocuses and naked ladies name with amaryllis and others. Colchicum is the source of the drug colchicine, an important medicine which is quite toxic in large quantities. To tell the difference: crocus flowers have stigmas (with the pollen) in groups of three and a single style in the center to receive pollen. Colchium has six stamens around a group of three styles. Colchicum flowers in the fall.

Between being unimportant compared to saffron and confused with medically important Colchicum, few writers paid much attention to spring crocuses. Spring crocuses came to European gardens as, by the 16th century, people started to have money and time for gardens. They were very popular even if nobody wrote much about them. People loved them as a sign of spring. Crocuses were among the first garden flowers brought to North America.

Crocuses' basic colors are yellow, white, and purple, but within that, there is a good deal of variation in shade and pattern. They are easily grown from the corm. Many will produce seeds but they almost always create smaller corms around the original corm. The corms are near the soil surface and easily transplanted. Gardeners recommend thinning crocuses every three to four years, separating accumulated corms. They tolerate a variety of soils, though like most plants with corms, don't do well in wet spots. They like full sun and tolerate partial shade. I have them in several places in my yard, and as each of those warm, another group of crocuses bloom. But, to be the first in the neighborhood, I set the corms on a southeast-facing exposure, in full sun, backing up to a low wall, which makes a particularly warm spot. And they lead all the rest of my crocuses by more than a week.
Crocuses close their flowers when it isn't sunny: on overcast days and at night. That undoubtedly protects the flowers from snow and cold rain. Robert Benchley wrote, "you might think that after thousands of years of coming up too soon and getting frozen, the crocus family would have had a little sense knocked into it." But, that's what we like about them, cheerfully undeterred by winter weather. 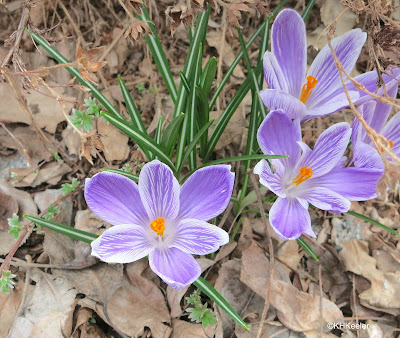 Even though they aren't the source of a lot of discussion by botanists, their role as first in the spring has resulted in crocuses being widely mentioned in literature and poetry. In music, there's a George Whitefield Chadwick song, The Crocus, from the 1890s (link) and a haunting Crocus Song from Thomas McCallum (listen: link). Ani DiFranco's Crocus has lovely images (lyrics) (hear it youtube). In poetry, a quick Google search picked up dozens of poems, with authors from Johann Wolfgang von Goethe (link) to Harriet Beecher Stowe (link) to Oscar Wilde (link) and Emily Dickinson (link).
Walter Crane (British artist 1845-1915) contributed
The Crocus
The golden crocus reaches up
To catch a sunbeam in her cup.
That poem seems likely to have inspired this children's song from Dany Rosevear
Crocus, Crocus, Waken Up
Crocus crocus waken up
To catch a sunbeam in your cup.
Hold it tight! Let it go!
Lilili lilo
(Watch it:  Youtube )
or maybe Crane repeated a folk rhyme.
Cicely Mary Barker (England, 1895-1973) included crocuses among her Flower Fairies. See the painting of The Crocus Fairies (link). I could not find any one crocus image that is very famous, but there are many enchanting ones (try a search on "crocus art").
My crocus pictures are simply photographs but crocuses so easily evoke the promise of spring.  For example:
Widely planted, widely anticipated, crocuses are lovely.
Comments and corrections welcome.
References
Chatfield, J. 2020. Crocus by Other Names. Buckeye Yard and  Garden onLine. link Accessed 3/2/21.
Missouri Plant Finder Crocus. Missouri Botanic Garden. link Accessed 3/2/21.