If I ranked vegetable garden plants on their beauty as plants, basil would rank high. It has shiny green leaves opposite each other on a square stem. When you crush a leaf, you smell the lovely fragrance, the reason that basil is an important herb.

The flowers are small and pinkish, nothing special, but attractive to bees.

Basil foliage actually comes in a variety of colors, from the shiny green I like to red (photo below.) Some of basil's variation is a result of thousands of years of domestication, some is because there are several species of basil, and hybrids between those species.

The common basil, called just basil or sweet basil or great basil is Ocimum basilicum. It is in the mint family, Lamiaceae, and has the characteristic lipped flowers, square stems, and aromatic leaves. That was hard for me to learn: my image of mints is spearmint, with fuzzy, more obvious teeth on the leaves, and a very different smell, but the mint family is big and diverse.

The genus of basil, Ocimum, was named for an aromatic Greek herb called okimon, very likely basil itself, although noone is sure. Currently the genus Ocimum has 65-150 species. They are native to all the continents except Antarctica, but are especially numerous in Africa, liking warm temperate to tropical conditions. As botanists share their information online, having a really large range for the number of species in a genus is increasingly uncommon, since it means "we don't really know how many different basils there are." In this case it appears two of the experts give different answers, A. Paton reports the lower number and P. Pushpangadan the higher number. 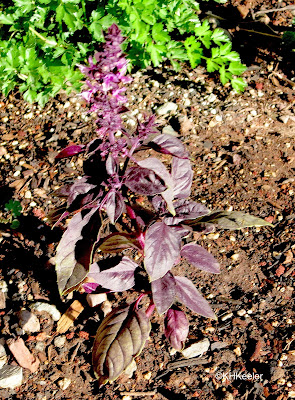 Ocimum species have been important spices and medicinal plants all over the world. Holy basil, O. tenuiflorum (previously O. sanctum) is a sacred plant of the Hindu religion and an important healing herb. Wild sweet basil, O. campechianum, was used ritually in its native South America. Amazonian basil, O, micranthum, is a tradition rainforest healing herb. Clove basil or African basil, O. gratissimum is a culinary and medicinal herb in West Africa, while camphor basil, Ocimum kilimandscharicum, widely used for as a spice and  in medicine in East Afric. Undoubtedly there are more.

Certainly the ancient Egyptians grew sweet basil. They included it in embalming mixtures.

Basil grows easily outdoors, though it is killed by the first good frost. It is best used fresh. The dried leaves in grocery stores are a faint echo of the fresh leaves. I have several times tried to dry basil leaves for future use. It can be done, but most often the leaves turn black rather than gently dry. Freezing them, or making the pesto sauce or other mix and freezing it, works a whole lot better.

The word basil is from the Greek basilieus, meaning princely or royal, as is the species epithet for sweet basil, basilicum.

Basil is so rich in folklore most of my sources told different tales, and I only collected some of the stories!

First, among the ancient Egyptians and Greeks it had an association with death. Probably that came in part from its use in embalming the dead in Egypt, but also as a richly fragrant plant used at funerals.

From the Greeks through the Middle Ages, basil was associated with scorpions. This ranged from basil breeding scorpions on its brusied leaves to a tale from the 1650's that "a certain Italian by often smelling of Basill, had a Scorpion bred in his brain" (Kamm p. 177). Culpeper, writing in England in the early 1600s, says the French physician Hilarius had an acquaintance who bred a scorpion is his brain from smelling basil. Another story was that if basil was grown in a pot, it would generate scorpions under that pot. Scorpions are found across southern Europe, with seven species in Italy. So southern Europeans might well have found scorpions in and around their basil pots. (But not in the brain).

Basil is also known as an antidote for basilisk poisoning. A basilisk was, originally, a dangerous serpent, but later added the head of a cock and wings (making it very like a cockatrice). It was horribly venemous and meeting its gaze could kill. The Oxford English Dictionary believes this story was a Roman confusion between the Greek name for basil which came into Latin as basiliscus, and the  Greek word for basilisk, also basiliscus.

Basil became a symbol of love in Italy after Boccacio in his Decameron told the story of Isabella, who found the body of her lover, murdered by her brothers, where they'd hidden it. Unable to bring it home, she cut off the head. She put her lover's head in a pot of basil, lavishing attention and many tears upon it. Poets have written about the sad tale, and artists have painted it. Take a look at "Isabella and the Pot of Basil" images on Google. Here is just one;

Basil and a pot of basil became a gift between lovers, or a young man might wear a sprig of basil to show his intentions were serious.

And yet, by Kate Greenaway's Victorian Language of Flowers, in the 1850s, basil signified hate.

The Language of Flowers was a 19th century invention with many variations. I could not find why basil became the symbol of hate.

Basil was used medicinally from Egyptian times, but while some authorities praised it, others warned that it was "too hot" and should be avoided. Modern medicine has not found much medicinal value in basil, but regards it as a safe food. (Note that I'm referring to sweet basil, Ocimum basilicum. There are many basils used in traditional medicines around the world.)

Today sweet basil is an important flavoring, used in salads, soups, stews, fish dishes, as a dried spice, fresh, or as an oil. Cuisines across the world would be impoverished without it.

It can be tricky to plant, because of poor seed germination(Gerard says the seeds easily mold) and seedlings that require good moist conditions. Europeans, though, growing basil in its native climate, believed that the more abused it was, the better it would prosper, so that it should be cursed and yelled at. Plant it in full sun, well-drained but well-watered, after the last frost. Cuttings root easily, and can be taken in when frost threatens the plants in the garden. You can try insulting it, but I like it too well for that.

Sweet basil is a lovely plant!

Dash, M. 2012. On the Trail of the Warsaw basilisk. Smithsonian Magazine. online at SmithsonianMag.com link  All about basilisks.

The Language of Flowers: An Alphabet of Floral Emblems. 1857. Online link

Rich, V. A. 1998. Cursing the Basil and Other Folklore of the Garden. hors dal & Shubart, Publishers. Victoria, Canada.