Spring brings memories of childhood. We lived in upstate New York (Scotia, near Schenectady) and behind the house was a forested hill, belonging to an owner who lived somewhere on the far side of it. At our edge, a stream wove through the lowest areas, making marshy ground under the willows. Jewelweed grew abundantly in that area.

Jewelweed is a lovely annual plant of moist, shady places in the eastern United States. The flowers are shapely tubes, orange to yellow. The foliage is soft and moist. The plants can grow five feet high by the end of the summer.
I have always thought the jewelweed name was because if you held the pretty leaves upside down under water, they shone silver. However, more authoritative sources than my mother say it is because water beads up on the leaves, and when those catch the sunlight they shine like jewels. See the water drops on the top left leaf in the photot above. Some people see the flowers as jewel-like. 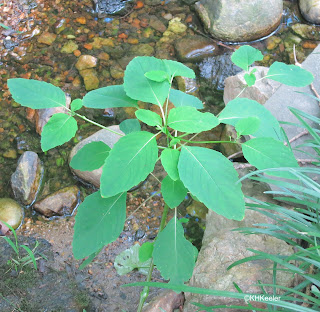 Three other species are native to the Pacific Coast. Four more jewelweed species found in the United States were introduced from Eurasia. In the whole world, Impatiens has 1,000 species, spread all over Eurasia and Africa, with just the 5 North American natives and no South American species. They are in the touch-me-not or jewelweed plant family, Balsaminaceae, which has 1001 species, because there is only one genus besides Impatiens, Hydrocera, and there is only one species of Hydrocera, Hydrocera triflora, which is native to south Asia.

The name Impatiens is based on the fruit. It is impatient. Well, impatiens means impatient. The ripe fruits pop when touched, throwing the mature seeds away from the parent plant. This gives the plant its common name touch-me-not. Dispersing seeds by flinging them with a catapult mechanism is an uncommon way of spreading seeds, but occurs here and there in the plant kingdom. (Several common American spurges, genus Euphorbia and Croton, use this dispersal method.) Jewelweed was the first plant I knew that did it, and so by late summer, whenever I was near them, I'd search out the ripe pods and touch them. Twang! and the seeds were gone. For me the name was Touch Me!, not touch-me-not.

The scientific name of the spotted jewelweed, Impatiens capensis, is a geographic puzzle, since "capensis" means "of the cape," and refers to the Cape of Good Hope, Africa. But this jewelweed is native to North America. The Dutch botanist who named it, Nicholaas Meerburgh (1734-1814 biography), thought--wrongly--that spotted jewelweed had been introduced to European gardens from South Africa. Once a plant name and description are published, the scientific name is rarely changed, even when there's an error. So Impatiens capensis it remains. The other eastern U.S. species, pale jewelweed, I. pallida. has an appropriately descriptive species epithet, pallida, which means pale (pallid).
The bright flowers are attractive to bees, including bumblebees, and to hummingbirds. Standing by a patch of flowering jewelweed is great for watching pollinators. 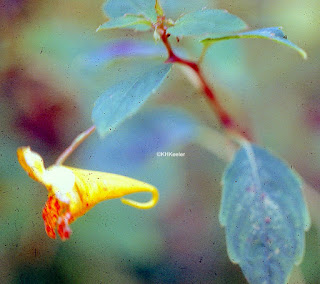 Except that jewelweed is a plant of soggy soils and deep shade. So watching for pollinators you might get your feet soaked, and the mosquitos will likely find you. For me, the close encounters with hummingbirds more than balanced a few mosquito bites.

The plants are soft and moist and their sap is orangy. The crushed plant is a folk medicine for treating skin irritations, from stinging nettles to poison ivy. Native Americans used it to treat nettles and poison ivy but also skin problems of all kinds, including rashes and burns. Scientific experiments testing a mash of the leaves found that that treatment did reduce dermatitis from poison ivy although the juice by itself was not shown to be effective.

The Menominees, the Ojibwas and the Potawatomis made yellow and orange dye from spotted jewelweed. I would like to try that.
I currently live between the areas where there are native jewelweeds, so I am reminiscing about a lovely plant without much chance of seeing one any time soon. Enjoy them if you encounter them!

Posted by A Wandering Botanist at 2:32 PM