Wanting to get out as the weather warms, I frequently walk Colorado foothills trails in April and May. Conspicuous there is wild alyssum, Alyssum simplex.

Wild alyssum is a relative with yellow, smaller flowers. The confusing names--wild alyssum in the genus Alyssum, while the better-known sweet alyssum has a quite different scientific name, Lobularia--is a common problem for plants; a well-known plant keeps a common name long after its scientific name is changed. Both are in the mustard family, Brassicaceae, and share the basic pattern of their flowers and stems. I am writing "wild alyssum" for clarity, but sources like Ackerfield's Flora of Colorado and the USDA Plants database just give "alyssum" as the common name of Alyssum simplex. It is also known as field alyssum and European madwort.

Wild alyssum is native to Eurasia. Introduced to North America, it has spread across the West. It is an annual that germinates at the end of winter, grows to its full height of maybe a foot (usually less), flowers and dies. By May, fields are full of plants with seed pods. The picture below shows both flowers and round, green developing fruits. 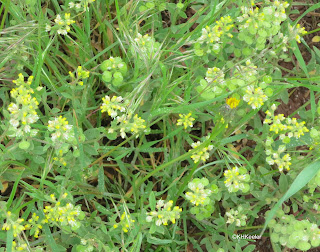 wild alyssum, Alyssum simplex, with flowers and fruits
Wild alyssum has been called Alyssum minus, minus meaning small, Alyssum parviflora, meaning small-flowered, and is currently, correctly, known as Alyssum simplex, simplex meaning unbranched. Identification of plants in the mustard family is often difficult because they are small, have yellow or white flowers shaped like a cross (alternate family name is Cruciferae, Cruc- for cross), flower in the spring, and are often weedy, so many species from around the world show up together. There are six species in the genus Alyssum in the lower 48 states of the U.S., all introduced from Eurasia. The seventh Alyssum in North America is Alaskan, American madword, Alyssum obovatum, and thought to be native. For identification, you usually need both the flowers and the fruits, because mustard family fruits  vary greatly. Wild alyssum's fruits are round but flattened. In late spring and early summer, the yellow flowers are gone, and the fields are full of stalks with round discs larger than the flowers were.
By midsummer and fall, the alyssums have all dried out,
It is clearly a weed, being from Eurasia and in places very abundant on roadsides and pastures. However, it is not on any noxious weed lists. It isn't toxic, sticky, spiny, or particularly difficult to control. Dense stands of wild alyssum do likely consume moisture that would have been available to other species. It and its seeds are presumably eaten by a variety of American animals.
I can find very little information on wild alyssum. The common name madwort is based on Europeans thinking alyssums could be used to treat rabies, the disease produced from mad dogs. Wort is an old word for plant, so it is "mad plant" but in a positive way, not as if it created madness. The Latin word alyssum refers to that tradition: lyssum is "madness" in Latin and putting the a before it makes it "not madness," in the way we distinguish moral and amoral in English. Despite that history, it is not mentioned in comprehensive herbal books, from Culpeper to Grieve to Lust.
Online discussion describes wild alyssum, and its relative sweet alyssum, as both toxic to and repelling rabbits, and edible to people and rabbits. Many plants in the mustard family are edible, although some have so much mustard oil as to seriously burn your mouth. Hoary alyssum (Berteroa incana), a white-flowered relative, similar enough to have alyssum in its common name, is reported as quite toxic to horses. So, for edibility, officially, no one knows. The different stories could be explained by who (rabbit, horse, adult human) ate how much (a leaf, a plant, a bowl-full) of what part (flowers, leaves, seeds). It is one of many plants which have received little attention.
But plants don't need to be useful, let alone edible, to be appreciated. Wild alyssum makes quite a yellow splash in early spring.  If you see it, admire the display.

Posted by A Wandering Botanist at 2:52 PM