Easily over-looked in the foothills grasslands is salt and pepper, Lomatium orientale. A member of the carrot family, Apiaceae, it has the characteristic flat head of flowers, with each coming off a multiply dividing stem (an umbel (see)). Salt and pepper is named because the white flowers have red anthers, which look dark, like pepper, on the white flower. Or so I'm told. I don't exactly see it, but I know of no other white, early spring umbels with dark dots, and the name salt and pepper is easily remembered, so it works for me.

Salt and pepper has a range from Texas to Minnesota and Manitoba, west to Nevada and Washington State. It flowers in April and May at 5000' in Colorado, but can be found in bloom into June in cooler locations. Descriptions elsewhere suggest pink flowers, and the western sites (Idaho, Montana) don't mention any pink at all. Several writers say the many species of biscuitroot/Lomatium are both very variable and very hard to tell apart. Twenty one new species of Lomatium have been described since 1980, a tremendous number of new species for a plant genus within the United States at the end of the 20th century and into the 21st. The plants I know have definite red stigmas, earning the name salt and pepper. The books say this one species goes clear to Washington State, but, based on all the new species in the genus, I'd easily believe that salt and pepper in Colorado is not the same as Northern Idaho biscuitroot from Montana, explaining the color variation.

The name Lomatium is based on loma, a border. The small rounded seeds have thin papery edges (borders). See photos of seed heads for fernleaf biscuitroot, Lomatium dessectum link). The species epithet for salt and pepper, orientale, means "eastern."

The leaves are blue-green and deeply divided. When the plant flowers early in the spring, its leaves and flowers are close to the ground. Later it may grow a bit taller (to about 15"). It is found in grasslands and the foothills, in Colorado from 4800 to 9000', favoring warm sunny sites. The seeds ripen in early summer. Then the plant dries out and becomes hard to spot, dying back to the root. The plant is perennial and may live many years.

The biscuitroot name is because the plants are edible. Native Americans (and probably settlers) made flour from the root, eating it cooked or raw. They also munched the leaves and the seeds. Nobody has tasted all 85 species of biscuitroots of North America (some are very rare and protected), but experts generaly agree all are edible, the root in particular. Not all foragers particularly liked the taste, however. Harringon said he liked them, but then qualified it, saying that small roots gathered in the spring were probably best. O'Brien and Vail found the roots hard to dig and frequently very bitter. Biscuitroots were certainly an important part of Native American diets, producing a store-able root and a source of flour. However there are some quite poisonous plants in the same family, so getting the identification of biscuitroot wrong can make you very sick. Don't taste umbels--carrot family plants--unless you are sure of the identification.
Thinking about Native Americans liking it and modern foragers being less positive, it occurred to me that this is a plant easiest to find in early spring. For people without grocery stores, food supplies ran low in the late winte. Early spring was a time of hardship, as plants were just starting to grow. So here was a plant that identified the presence of an edible root by flowering. You'd likely overlook a little bitterness for a substantial meal in a lean time.
Desertparsley is an easy common name for them because they are related to parsley (Petroselinum crispum); both are in the carrot family. It is used as a common name for even more of the many Lomatium species than biscuitroot; if you don't know whether the root of a particular species is edible, you can at least relate it to parsley.
All over the West, Native Americans used local Lomatium species as medicines, treating skin ailments, sore eyes, sinus problems, colds, sore throats, as a poultice on broken bones, and more (see details in Moerman, Native American Ethnobotany, database online: link); together the uses for Lomatium species fill five of the big, two-column pages of the printed volume. The plants, especially fernleaf biscuitroot, Lomatium dissectum, are reportedly antimicrobial and were used to treat the 1917 inflluenza. However, modern research has not confirmed the effectiveness of biscuitroots as medicine (for example WebMD), though the widespread Native American use suggests underlying effectiveness. A caution, though: some people have strong allergic reactions: see the photos in this medical paper (link). 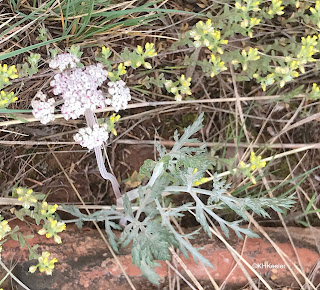 Edible to people, salt and pepper is eaten by a wide variety of wildlife, from gophers that chomping the roots to elk browsing the leaves to birds gobbling the seeds. The flowers support the first small bees and butterflies of spring.
With white flowers and red anthers, salt and pepper is one of the few species in this big group easily identified to species. You find the distinctive flowers early in the spring, often between late snowstorms.
Hiking in the foothills and open meadows all over the West, watch for them.

References (see also those in the text)

Posted by A Wandering Botanist at 8:25 AM