We had a blast of sleet and cold rain and now a forecast for rain and cool all week. So I'm posting pictures of tropical vines in flower. All year round, you can visit the tropics and see flowers. Not all these vines bloom year round, but when you see them, wow!

They are more wonderful in real life, with texture and scent, but I can only share photos today, so: enjoy.

Red jade vine, is from southeast Asia (Mucuna bennetti in the pea family, Fabaceae). I saw it in Hawaii. Here's another angle 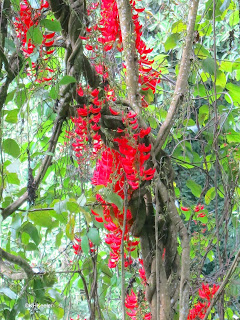 Red jade vine looks a lot like other pea-family red flowers, but its relatives, jade vines (Strongylodon species) are a rare, unmistakable color. They too are from southeast Asia but planted all over the tropics. (My photos are from Oahu, Hawaii).
Clock vine flower, Thunbergia mysorensis (in the acanthus family, Acanthaceae) is another vine from the Asian tropics with amazing flowers.
Carl Thunberg was a Swedish doctor and botanist (1743-1828) who traveled in South Africa, Indonesia, and Japan. He collected many plants and many are named after him. The genus named for him, Thunbergia, includes some quite spectacular big vines. Below is another one, black-eyed Susan vine, Thunbergia alata, obviously different from the sunflower family blackeyed Susan of the plains (Rudbeckia). From South Africa, black-eyed Susan vine is grown in cool climates as a garden annual. The picture below is from a window box in London in December (mild climate!)
Another plant group with spectacular flowers are catalpa's viney relatives, vines in the catalpa family, Bignoniaceae. Trumpet vine (Campsis radicans) of eastern North America, now widely planted, is a temperate example. I don't know the name of this multicolored vine from Costa Rica, other than it was in the catalpa family. But very handsome!
The morning glory (Ipomoea species) flower below (morning glory family, Convolvulaceae) is familar because weedy morning glories with similar flowers grow well north in the U.S. and others have been commercialized and can be bought as (frost-sensitive) seeds, for example heavenly blue (Ipomoea tricolor). But there are 449 species of morning glory (Ipomoea) and many have similar tubular purple flowers.
While blue, purple, and white are common, a few morning glories have red flowers. Shown below is one of my favorites called Prince Kuhio vine in Hawaii and Lady Doorly's morning glory in the Caribbean where it is native. It shares the common name cardinal creeper with various red morning glories. The scientific name is Ipomoea horsfalliae. It honors Mrs. Charles Horsfall, and so has a rather rare feminine ending, -ae after the i. (The form is "of horsfall" making it possessive, as in Horsfall's morning glory but to make a possessive after consonants like a double l, Latin puts two i's in the masculine. Hall's bluestem (usually called sand bluestem) is Andropogon hallii. Horsfall's morning glory would be Ipomoea horsfallii, if it referred to Charles Horsfall, but Ipomoea horsfalliae honors Horsfall (female), that is, Dorothy Horsfall, an avid botanist like her husband.)
Another great group of vines native to the Americas are the passion flowers. I saw this one blooming in Bali--you can meet them all over the world. Likely it is red passion vine Passiflora racemosa, but there are two or three very similar species. 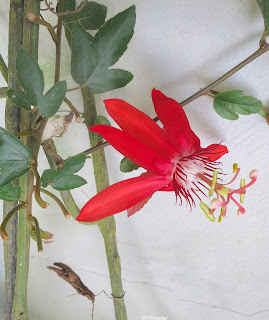 And finally, a pea vine (pea family Fabaceae), the butterfly pea (Clitoria sp.). I saw this in Panama, but there are similar species native to Asia and to the southern U.S.
The tropics is rich in vines because there is abundant moisture that supports big trees for vines to climb on (vines are rare in grasslands). Many have bright flowers because there are pollinating animals--butterflies, bees, hummingbirds and sunbirds, that, flying through the deep green of the rain forest, are attracted to conspicuous flowers. People have trouble seeing them in their native habitat, because they tend to be up high in the trees, but planted in gardens, they make spectacular displays.
Comments and corrections welcome.

Posted by A Wandering Botanist at 3:04 PM