It has pretty yellow flower heads. It is in the same family as dandelions (Asteraceae) and resembles dandelions in terms of the circular yellow flower head and the puffball of airborne seeds. It also looks like salsify (Tragopogon species). Three species of Tragopogon have naturalized across North America (link). While not in the same genus, cutleaf vipergrass has similar flowers and seed heads, and narrow leaves, making it easy to confuse with the yellow salsifies. Cutleaf vipergrass is generally shorter than a healthy salsify, with smaller flower. Flowering stalks of cutleaf viper grass branch obviously, salsify only occasionally. The flower buds looked different too, I think of the cutleaf vipergrass buds as pointier  (not as wide, proportionately at the based) and appearing striped. Due to the similarities, in northern Colorado cutleaf vipergrass is frequently called false salsify or black salsify. Experts like the USDA and the Flora of Coloardo prefer the common name  cutleaf vipergrass.

Cutleaf vipergrass is very abundant where I live. You can find it in yards (mine), on roadsides, along hiking trails. But its current US distribution is only Colorado, Wyoming, Nebraska, Kansas, Oklahoma, Texas, Montana, Utah, New Mexico, Arizona and one report from Nevada. Elsewhere it has not been recorded.

The first report of cutleaf vipergrass in the U.S. was in 1954 in Colorado. There are two herbarium collections that year, about 35 miles apart (Hygiene and LaPorte, CO) which suggests it had already spread a bit. But since then it has spread and spread, becoming abundant enough in Utah to make their noxious weed list. Not bad for a plant no one seems to have collected in Utah before 2014. Here are maps of its distribution: SEI Map link; BONAP map link. Al Schneider of the Southwestern Colorado Wildflowers website had a hard time identifying it, because the plant wasn't in the floras he used (Flora of Colorado Western Slope 3rd edition, Intermountain Flora, Flora of Utah). When those books were published, it wasn't common enough to include. Cutleaf vipergrass is a plant on the move, spreading rapidly out from the central U.S. 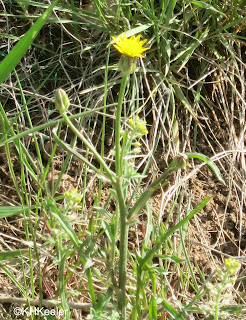 Both dandelions and salsifies were brought to the U.S. as food plants. Cutleaf vipergrass has a close relative, Scorzonera hispanica, generally called black salsify or just scorzonera, that is an important root vegetable in southern Europe and the Near East. Food websites say it has an excellent and distinctive flavor. Very little is written about cutleaf vipergrass, however. It apparently was eaten as a wild-collected food in Spain, but there is no suggestion that it was cultivated, or liked well enough to be intentionally brought to North America.

Cutleaf refers to the jagged leaves, which are easy to recognize.

Vipergrass is the European name for this plant. Grass now usually means a plant in the grass family, Poaceae (when it doesn't mean marijuana, Cannabis sativa). Before scientific names were established, though, say in Shakespeare's time, grass was used more generally, for small plants, expecially small plants found in pastures and eaten by cattle and other domesticated grazers. (Five-finger grass is an old common name for the cinquefoils, genus Potentilla, rose family Rosaceae).  So grass here just means small herbaceous plant.

It is called vipergrass because the milky sap was believed to be useful to treat snakebites. The Oxford English Dictionary quotes Cowley Of Plants in 1711: "Viper-grass, full of a Milky Juice Good against Poison." And the dark taproot looked like the venemous escorçu according to Frampton (1580 translating Monardes).

The scientific name is the same odd name, cutleaf vipergrass, as the common name. Scorzonera came from Italian where scorzone was some kind of venemous snake or Spanish where escorzon was a toad or lizard deemed venemous or escorçu in Catalan between Spain and France. Thus scorzonera means roughly viper plant, and laciniata means cut into narrow divisions, fringed. Cutleaf vipergrass.

Where I live in northern Colorado, it is more often called false salsify. We have a LOT of slightly taller, invasive salisfies (Tragopon dubius and T. pratensis) so it is a reasonable reference. However, I don’t like names that define a plant as something it isn’t; what if you don’t know salsify? Black salsify isn't a lot better. The black is the covering of the roots, atleast for the cultivated Spanish vipergrass (S. hispanica). The name cutleaf vipergrass has the advantage of a long history (back to atleast 1629) even though, in our modern use of the word grass, it is misleading, it is a sunflower (dandelion and salsify!) relative,  not a member of the grass family. The website iNaturalist calls it Mediterranean serpent-root. That is a reasonable version of the name, but not easily recognized as being the same as cutleaf vipergrass. Choose your own favorite, I guess.

There is so little information on cutleaf vipergrass that it is not clear if it annual, biennial, or perennial. The Flora of North America says it is a monocarpic biennial or perennial. Monocarpic (botanical word, same meaning as semelparous in animals) plants spend at least one year storing energy, then, in the year they flower, throw everything into flowering--keeping no reserves--and so dying. This suggestions that to control cutleaf vipergrass, if you have too much in your yard, cut off the flower heads before seeds mature and are released. You don't have to dig up the flowering plant, because its hormones will steal from all its tissues to make flowers, which so weakens the plant it won't survive the winter. You do need to be vigilant because the first flowers will be followed by others until its reserves run out.

The first leaves don't have the fringe and look very like grass leaves, long, thin and straight, making the youngest plants look like little clumps of grass. By the time they are ready to flower, the leaves have the characterisic cuts and slump in a circle around the taproot. The flowering stalks shoot up from there, often branching.

Like dandelions and salsify, cutleaf vipergrass flowers open in the morning, close later in the day. Peter Llewellyn discovering it in Spain, saw it open only 9 am to 11 am, "the shortest daily flowering period I've ever seen."

This is a European plant that is spreading in the U.S. It doesn't seem to be much of a problem--not spiny or poisonous--but clearly capable of becoming so abundant it interferes with crops or more nutritious pasture plants. Mostly we read about weeds when they are already widespread. This plant is currently only in the mountain west. No report from California, none from Illinois or Arkansas. But its only been known here since 1954, so the current 11 states it has reached in 67 years, suggest it grows very well indeed in North America. I doubt it is anywhere near its North American range limit. It is pretty salt tolerant and grows well in cracks in pavement and in dry spots in Colorado, so it is likely to succeed as a roadside weed. Other states will likely record the first appearance of cutleaf vipergrass in the next decades. Since I am publishing this in 2021, I shall speculate that it will reach the California coast by 2031 and the Atlantic by 2051. Stay tuned.

AND,  you can be part of recording the expansion of cutleaf vipergrass. iNaturalist will record your observations, so if you find it beyond western Nebraska or in Idaho or California (etc.!), take a photo and post it on iNaturalist. Contribute to watching cutleaf vipergrass spread!

Posted by A Wandering Botanist at 2:25 PM