I first noticed it as a weed in my lawn in Lincoln, Nebraska. I weeded it out, only to find more. It was rising on my "Plants I Don't Like" list, until I identified it as a traditional medicinal herb from Europe. What jumped it to "Plant I Like" was finding that it was, under the name alehoof, an important ingredient in brewing in medieval Europe, so long ago that Europeans were not using hops in beer. Hops reportedly came from Egypt, reaching Germany in 800s, the Netherlands and Belgium in the 13th century and England in the 15th. Alehoof/ground ivy was a part of a mixture called gruit, used for flavoring, to clarify the beer, and probably because "we've always done it that way." I never made beer with it, but I very much enjoyed the idea that this weed in my yard was a useful plant 1,500 or more years ago. 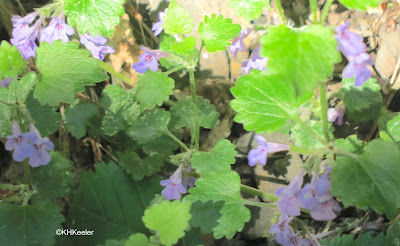 Once you feel a little positive about it, you notice its pretty purple flowers and slightly-minty smelling leaves. It is in the mint family (Lamiaceae or Labiatae). It not just smells minty and has typical mint-like flowers, but it has the characteristic square stems (only one other common plant family has square stems, the verbenas, Verbenaceae, and their leaves don't have a scent.) It is unusual as mint because it creeps across the ground on fairly long horizontal stems. Ground ivy, the common name government websites use, reflects that creeping habit, but that name is misleading, since it is not related to English ivy or poison ivy, or any other famous ivy.

The scientific name relates it to other species. Glechoma uses an old Greek name for pennyroyal, glechon. Pennyroyal, Mentha pulegium, is also a creeping mint, though its leaves and flowers are much smaller. The species epithet hederacea means "like English ivy, Hedera helix." There are seven or eight recognized species in the genus Glechoma, native to the Old World. Most have received very study, perhaps because the mint family is really large, with over 7,000 species many very similar.

Ground ivy was probably brought to North America as a medicinal plant. The traditional European herbals use it for upper respiratory problems, stomach ailments, against tintinitis and eye problems...and more. Current herb books and websites use it for throat and chest problems. The scientific sites find little support for any of the medical uses. However, though publications on PubMed show compounds in ground ivy have biological activity; biological activity means it is an active ingredient when used on living things, but does not necessarily mean it is good for living things. Web M.D. says early research reported a lotion including ground ivy was soothing to sunburn. The blog Eattheweeds refers to studies that say it inhibited some viruses and stimulated blood platelets. After all these centuries of people using ground ivy medicinally, it looks to me like the scientific community hasn't found any strong medicinal properties.

Ground ivy is edible. People have been eating it as a green since before there were records. It is reported as toxic to horses, though other livestock seem to tolerate or avoid it. Horses have to eat large amounts of it, which they generally will not do voluntarily. This does suggest that humans, also, should be wary of eating it in large quantities, and unhealthy or pregnant individuals would be wise to avoid it. But you could put a sprig or two in a salad for color or zing.

The big news about ground ivy, though, is how weedy it is. Since introduction to North America it has spread all across the continent. It is a serious problem to lawns and invades forests in the eastern U.S. I tried to bring it to Colorado--probably shocking, but I liked it--but it died. Much of the West and Southwest is mostly too hot and dry. But it is abundant in the rest of the country (see map link). It is classed as noxious weed in Connecticut but elsewhere is just a frustrating little invader.
The chemicals from the leaves reportedly inhibit the growth of plants of other species, especially seed germination, a trait called allelopathy, aiding ground ivy in expanding to a monoculture.
On the other hand, you can find ground ivy on virtually every "Weeds for Pollinators" list. It has a rich nectar and is visited by all kinds of insects. If you don't mind a diverse lawn, this is an excellent plant for supporting pollinators; watch the bumblebees, honey bees, little native bees, flies...lots of entertainment.
Despite being hated across the East, ground ivy is available for sale as a ground cover from several companies. It does well in moist, partly shady areas and, as noted, will feed insects. The seed sources tend to call it ground ivy--who would buy the infamous creeping Charlie? And that is an important point about this plant; it has two widely-used common names and to read about it well, read about both ground ivy and creeping Charlie. (And by its scientific name, Glechoma hederacea, but lots of popular websites never include the scientific names.) 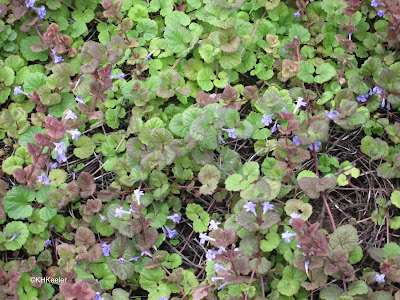 Posted by A Wandering Botanist at 2:18 PM