"Okay," I said, since I was always a sucker for a plant, especially one I knew nothing about. It came with its name on a handmade pot label, Epiphyllum oxypetalum. What a mouthful. I ignored the name.

I took it home, and on her advice, cut it into three parts and carefully rooted the two cut off pieces. (I air-layered them with great effort; I have since learned that E. oxypetalum roots easily at the nodes.) Both parts rooted and all the plants grew. All three were awkward plants, because the long narrow cladodes were unbalanced, so the plants flopped dreadfully no matter which way I leaned them. I tied each to a stake and put them in north and west-facing windows.

Epiphyllum is a cactus (that is, in the cactus family Cactaceae). Its greeen parts are stems, called cladodes, not leaves. A key to recognizing modified stems is that leaves and other stems grow from stems, while leaves are terminal, no other part grows from them. This plant put out long thin cladodes-- looking for good light I presume--and made big broad ones--probably when they liked the light regime. The broad cladodes are up to 12" x 3", the long one you see in the photo is over 5'' long. The plant has had no problem making longer stems. (For scale, the interior diameter of the flowerpot above is 5").

They grew and became harder to manage. Long cladodes with big broad ones on the end and then a thin one going several feet more...they unbalanced the pot (note the rock in the saucer above!), sagged and slumped all over neighboring plants. Then they climbed the window and into the curtains.

I wasn't pleased, but I tried to tame them, not very successfully. I gave one away. For the summer, I put one on my closed porch, which becomes quite warm in the bright sun of summer afternoons. It reached to the ceiling, bent around the other plants. I put my other Epiphyllum pot in a north-facing upstairs window and let it cope with indirect sunlight and the 70-75 degree temperatures of my office.

In August 2020, on the porch watering my plants--wow! there was a  bud on the Epiphyllum!

And suddenly I wanted to know more about Epiphyllum oxypetalum. It turns out to be called queen of the night, Dutchman's pipe cactus, jungle cactus, lady of the night, night-blooming cactus, night blooming cereus, orchid cactus...and probably more. But clearly, the big flower opens at night.
(Night-blooming cereus is a name everyone wants to put on night-blooming cacti, but cererus cacti have tall stiff stems; they are columnar and they don't flop. Epiphyllums are quite a different group within the cactus family and they sprawl. Call Epiphyllum night-blooming cactus but not night-blooming cereus. )
Notice that the bud grew from the edge of a broad cladode.
That was August 8. It was August 12 before it opened, after dark. It was bigger than my hand all spread out, so more than 7" in diameter. Spectacular.
This summer, on August 9, 2022, I noticed a bud on the plant in the upstairs window:
No, there were two buds:

They opened after dark on August 17 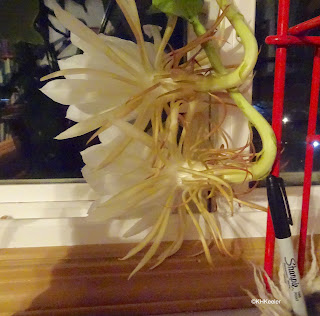 This time I "watched" for the scent. Not long after they opened, I smelled it, a lovely odor, like a very light lilac scent. While waiting to smell it, I had wondered if some people might find the famous scent of queen of the night to be offensive, but now I don't think that is likely; it was light and very pleasant. 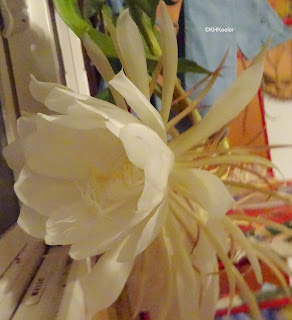 I will treat my queens of the night with more respect, now I have seen and smelled their blossoms.

Queen of the night is native to Mexico south into South America. In nature, it usually grows epiphytically, that is, on another plant but getting water from the rain and nutrients from run off or stuff that accumulates around its base, not from the supporting plant. So living in the pots in my windows, my queens of the night grow like they would in nature, reaching with their cladodes for the best spots, even if the jade plant already was there. Its just that they are so BIG! On a tall tropical tree 5' stems are no big deal, in my window they are very awkward.

The name Epiphyllum is from the Greek, epi "upon" and phyllon "leaf", referring to the way the flowers come out of the broad cladodes which, at the time the plant was named (early 1800s) were thought to be leaves. The species epithet oxypetalum means "sharp-petaled" meaning they are sharply pointed.

Dutchman's pipe cactus refers to the hooked shape of the buds and flowers.

Queen of the night is reportedly the most widely grown cactus, which is saying something considering the number of Christmas/holiday (Schlumbergera) cactuses in people's houses. They can be grown outdoors in USDA Zones 10 and 11...they will survive only a very light frost. They are jungle rather than desert plants, liking humidity and regular water. My house is dry and cool...since they flowered for me, they are pretty tolerant.

In nature, the big flowers are pollinated by bats, which must be grand to watch. They produce a pod that is edible.

Wonderful plants, but so difficult to keep from tipping over their flowerpots.