The Solanaceae, Foods and Poisons 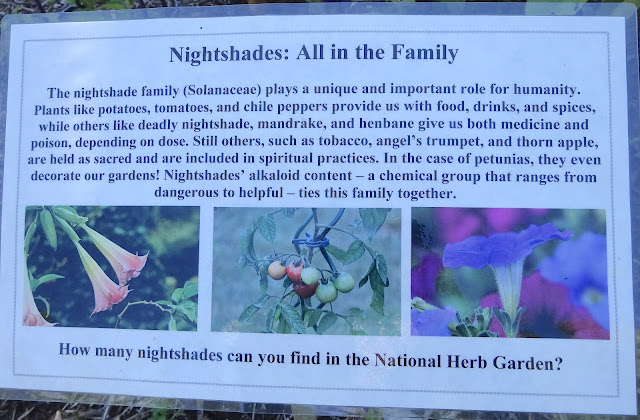 The National Botanic Garden in Washington, DC has the above sign.

There are about 2,300 species in the nightshade family, Solanaceae, so I can hardly mention them all, but here's a tour of some of my favorites:

Let's start with the genus Solanum for which the family is named. It's huge, with about 1,500 species. Those include tomatoes (Solanum lygopersicum), potatoes (Solanum tuberosum), and eggplants, (Solanum melongena). It also includes nightshades like hairy nightshade (Solanum villosum) and American black nightshade (Solanum americanum). Tomatoes and potatoes are a major foods! The nightshades are supposed to be poisonous. Bittersweet nightshade, Solanum dulcamara, a vine with red cherrytomato-like fruits, certainly is. Probably some of those hundreds of other species of Solanum are poisonous and some are not; don't try tasting to find out. After all, we eat potato tubers but the leaves contain enough of the alkaloids solanine and chaconine that they are poisonous in moderate quantities. One characteristic of the family and the genus is shared chemistry. 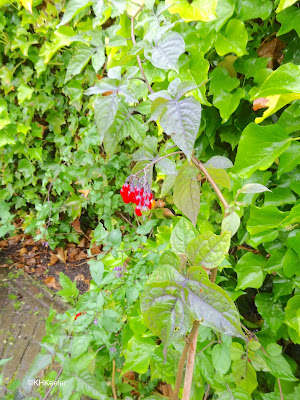 Chili peppers, genus Capsicum, incorporated capsin, the compound that make them hot, to discourage animals eating their fruits, and instead of discouraging humans, it made them eat more chili peppers. Just after Europeans discovered them in 1492, chilis were carried all over the world--to eastern Europe (paprika), southern Europe (pepperoni originally used them), Indian chilis, Hachijo food in Japan, Sichuan cooking in China and more. People all over the world have bred bigger and smaller, hotter and milder chilis, in red, green, yellow, orange and purples.

A meal of pizza and salad without Solanaceae

Tomato sauce, tomatoes, pepperoni, green and red peppers and a spicy salad dressing made with tomato sauce on that salad.

Other members of the nightshade family are quite poisonous; eight pretty black berries of belladonna (Atropa belladonna) can kill an adult. In Italian, belladonna translates as "beautiful lady." During the Renaissance, women of the Italian court reportedly used drops of belladonna juice to dilate their eyes, making them more attractive. A belladonna derivative is in use today optometrists dilate patients' eyes. The active ingredients atropine and hyoscine, ingested, cause symptoms from sensitivity to light and blurred vision, to headache and loss of balance, and, more seriously, confusion, hallucinations, lethargy and convulsions, in the worst cases leading to death.
Hallucinations are common symptoms of poisoning by solanaceous plants, so they have been used ritually many places many times. Jimson weed or thorn apple, Datura species, angel's trumpet (Brugmansia species), henbane (Hyoscyamus niger) and mandrake (Mandragora officinarum) are among the hallucination-producing species. The same chemistry gives them medicinal uses, but most are too toxic to be recommended, though many compounds derived from Solanaceae are in use as medicines. These are plants for which you can find recent case studies in the medical literature of people needing heroic treatment after ingesting them.

And then there is tobacco, Nicotiana species. Tobaccos have been smoked ceremonially for millennia in the Americas. The fact that nicotine is highly addictive wouldn't much affect people who smoke only as part of important events.

Tobaccos (there are 95 species) are also grown as pretty ornamentals. So are angel's trumpets. Probably the best-known ornamental nightshade is petunia (Petunia species).

And, with 2,300 species, there are lots of nightshades that are not famous.

Several species of ground cherry, Physalis, the genus of tomatillos, are native in Colorado and I see them in the grasslands now and then. Pretty plants.

And these that I can't name: 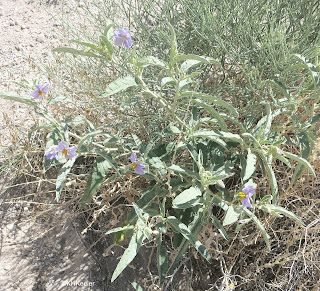 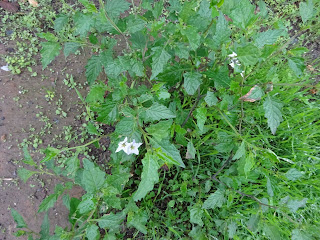 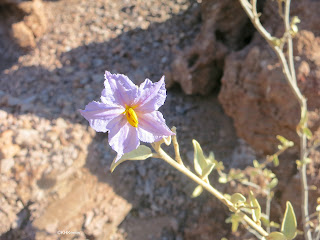 Plants in the Solanaceae often have flowers like tomatoes or potatoes, leaves that look or smell like the leaves of tomatoes and potatoes, and fruits that are round berries like cherry tomatoes. As you can see above, some have long tubular flowers, flower color ranges from pink to white to yellow, and fruits can be black or red or green when ripe. They also share the tropane group alkaloids, especially in the leaves and unripe fruit, which are toxic, hallucinogenic, and the source of many important medicines.
Comments and corrections welcome
References
Blamey, M. and C. Grey-Wilson. 1989. The Illustrated Flora of Britain and Northern Europe. Hodder & Stroughton. London.
Simpson, B. B. and M. C. Ogorzaly. 2014. Plants in Our World. Economic Botany.  McGraw Hill Education, New York.
van Wyk, B-E. 2005. Food Plants of the World. Timber Press. Portland, Oregon.
Vaughan, J.G. and C. A. Geissler. 1997. The New Oxford Book of Food Plants. Oxford University Press. London.
See also
Angiosperm Phylogeny Working Group Stevens, P. F. (2001 onwards). Angiosperm Phylogeny Website. Version 14, July 2017 [and more or less continuously updated since]." http://www.mobot.org/MOBOT/research/APweb/.
In this blog: Angel's Trumpet link
Tomato link  and tomato the vegetable
Goji Berries link
Kathy Keeler, A Wandering Botanist
More at awanderingbotanist.com
Join me on Facebook: https://www.facebook.com/AWanderingBotanist
Posted by A Wandering Botanist at 2:16 PM