The cinquefoils are easily recognized and found all around the world. There are about 400 species of cinquefoil, genus Potentilla (rose family, Rosaceae). They have five petals, like a basic rose flower, but never have thorns. The most common one in Europe had five-lobed leaves as well as five-petaled flowers, so was called cinque-foil, meaning 5-(lobed)-leaf. American species--about 98 native species!, tend to have more lobes than five, so the name carried over but doesn't fit very well. 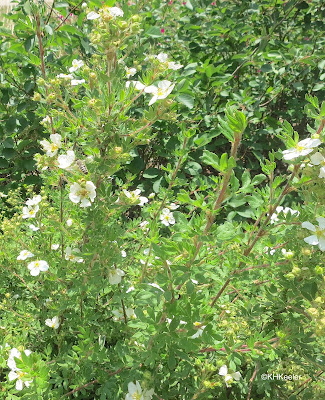 In North America, almost all the cinquefoils/ Potentilla species are herbs, nonwoody plants.

So I easily learned shrubby cinquefoil, Potentilla fruticosa, because it shares the flower and leaf shape, but is a shrub, the only shrubby cinquefoil in Colorado (and the U.S.) Since it was (is) so distinctive, I shouldn't have been surprised that taxonomists, revising the very big genus Potentilla, gave the shrubby cinquefoils a genus of their own; Potentilla fruticosa became Dasiphora fruticosa. The shrubby cinquefoil group, Dasiphora, is a genus of about 12 species. Only one is found wild in North America, the others are Eurasian. Since Potentilla is a very confusing group, separating out the shrubby cinquefoils made Potentilla a little more uniform (no shrubs!).
It is particularly easy to identify shrubby cinquefoil, Dasiphora fruticosa, in North America because it is the only plant with cinquefoil-like leaves, flowers, and seed pods that is shrubby. North America has only the one species, Dasiphora fruticosa, so for Americans, D. fruticosa is THE shrubby cinquefoil. Easy. It grows across the northwestern 3/4 of North America (see USDA map link). You can learn it in Maine and recognize it in California!
Our shrubby cinquefoil, Dasiphora fruticosa, is in fact not native just to North America. Its native range circles the globe in cool northern climates (circumboreal). Thus this plant was named by Linneaus in the 1700s as Potentilla fruticosa, Potentilla meaning "potent" since some of the many European cinquefoils were important medicines, and fruticosa meaning "bushy" or "shrubby." Its current genus, Dasiphora, is a compound of the Greek words dasys meaning hairy and phoros, -bearing, so "bearing hairs," alluding to tiny hairs around the floral receptical (hypanthium) and on the seed pod.
Per Axel Rydberg (1860-1931) put shrubby cinquefoil into Dasiphora in the 1890s. Whether it is a Potentilla or something else has been argued that long! DNA evidence supports the split (see Flora of North America link). Rafinesque gave the name Dasiphora to the North American shrubby cinquefoil 100 years before that. The naming of American plants in the early 1800s was messy. That was fifty years before Darwin's Origin of Species, and at the time, most naturalists believed the same plants and animals were found all over the world. So American species, if at all similar to known Eurasian ones, were lumped into European species. Constantine Rafinesque (1783-1840) was an eccentric French naturalist:  brillliant, wide in his interests, and unconventional. Visiting North America, he named hundreds of new plants and animals, to the disgust of the biological establishment, which thought they were all the same as from Europe (including prairie dogs!). Rafinesque was right a lot, but also wrong a lot. Shrubby cinquefoil is one of the cases where the plant from Europe is considered the same species, but the name he published, Dasiphora, provided a valid historical name to use when making it separate from the nonshrubby cinquefoils.
I note that the Missouri Plant Finder and Ackerfield in the Flora of Colorado have kept shrubby cinquefoil as Potentilla fruticosa, but other recent sources, Flora of North America, USDA Plants Database and the US Forest Service, have switched to Dasiphora fruticosa, so watch for both names.
As you might expect from a species found around the world, shrubby cinquefoil can be quite variable. Flower size varies, leaf shapes vary, plants in some areas are one sex or the other (dioecious), while elsewhere the plants have bisexual (perfect) flowers, some plants have 14 chromosomes some have 28... it goes on. This kind of variation, when widespread and not matching geographic or climatic features, leads botanists to call it all one species, despite the weirdness of saying a plant in Poland and a plant in Colorado are the same species. (Being the same species implies they could mate; they are only separated by distance. But it is such a great distance! Botanists would prefer to divide big groups into less-widespread species. However, the plants don't care about humans who want to arrange them neatly. Shrubby cinquefoils are complexly variable, and botanists just have to deal with it.)
These plants were brought into cultivation long ago: pretty flowers, nice shape, shrubby, live a decade or so. With cultivation came breeding for color variation, so the flower color, in nature mainly shades of yellow, now ranges from bright red-orange (link) to pure whites. And other variation that appeals to humans, such as dwarf forms.
The flowers are attractive to pollinators. The fruits are eaten by rodents and birds. at least one attractive native moth uses it as a host plant, the Nevada buckmoth, Hemileuca nevadensis (link). Deer, elk, mountain goats, and big horn sheep graze shrubby cinquefoil in North America, but it is not a preferred food.
Widespread as it is, Native Americans naturally found uses for it. The Blackfoot filled pillows with the leaves. They also added it to dried meat as a spice. The Cheyenne considered it poisonous. However, they used the dry leaves as tinder to start fires. Eskimos made a tea from the leaves. (See more link). Utah State Extension gives additional Native American uses, including to make an arrow poison that went straight to the heart. (link)
Europeans used non-shrubby cinquefoils as medicines and charms. I cannot find any that refer specifically to shrubby cinquefoil, and it is not easily confused with its herbaceous relatives.
Shrubby cinquefoil is tolerant of quite cold winters and can be found at elevations over 10,000 feet. It particularly grows in open spots in forests or along streams. In the arid west, look for it in moister areas, but not wet places. It rarely only grows more than 3' high. Flowering starts in June and continues all summer, so it makes a bright splash of color in the forest. 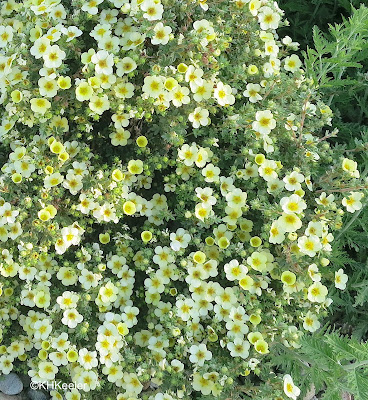 Posted by A Wandering Botanist at 2:43 PM