I grew up calling it butter-and-eggs, a pretty little plant in the meadows of New York and Ohio.

Butter-and-eggs is a common name in North America, referring to the dark and light yellow of the flowers. Its scientific name is Linaria vulgaris, a small plant in the plantago family, Plantaginaceae. Its the same plant that is called yellow toadflax. Yellow toadflax or common toadflax is its usual common name in Europe, where it is native. Yellow toadflax is also the name by which it appears on noxious weed lists in North America.
That odd name, toadflax, is because the flowers reminded people of toads. The flowers are completely closed, like snapdragons, and will gape open like a toad's mouth if pinched or, more important to the plant, when a bee lands in the right spot. An alternate explanation of the name is that toads were frequently found under them. It is called toadflax not because toads gathered the plants to make linen--which was what I first imagined--but because the narrow leaves of yellow toadflax look very much like those of flax plants (genus Linum, flax family, Linaceae). (Once they flower, toadflax and flax are easy to distinguish.) The scientific name, Linaria, also alludes to the similarity to flax. The species epithet of yellow toadflax, vulgaris, means common.

And common is a good name for it. Since coming to North America, butter-and-eggs has spread to all 49 states of the continental U.S. and all of Canada.

It has many other common names--tode, yellow rod, gallwort, monkey flower, bread-and-butter, wild snapdragon (and see Wikipedia!). One common name, ranstead or ramsted, used in the United States not Europe and now largely forgotten, refers to a Welshman named Ranstead who brought butter-and-eggs from Wales, where it was a pasture weed, and planted it in his garden near Philadelphia. He shared it, so people called it ranstead. But probably there were many other introductions, because butter-and-eggs is pretty and was used medicinally in Europe. Additionally, its small, numerous seeds--as a child, I loved to pinch the capsules open--would have easily contaminated hay or other imports.

From its introduction, probably well before 1700, yellow toadflax spread. In 1748 William Darlington wrote, " This foreigner is extensively naturalized,--and has become a vile nuisance in our pastures and upland meadows." p. 110

I'll call it yellow toadflax, because that's what official sites like the USDA Plants list, call it.

Yellow toadflax can be found all across North America. In the East, Midwest and South it is common, but rarely troublesome. In the West, it is classed as a noxious weed, for example in Colorado, Wyoming, Utah, Idaho, Montana, Nevada, New Mexico, Oregon, Washington, Manitoba, Saskatchewan, British Columbia, and Alaska. 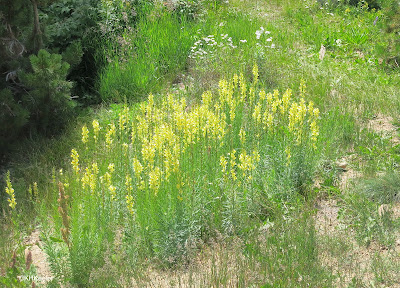 What yellow toadflax does to be considered a noxious weed is to grow well and taste bad to livestock. Once established, the plant spreads rhizomatously, forming dense clumps. In the arid west, it outcompetes native plants. The big plants would perhaps be tolerated if cattle and sheep ate it. But they don't. That creates a vicious cycle. The animals eat everything but the toadflax; the toadflax spreads; the animals still avoid it...until the whole pasture is growing yellow toadflax, and there is nothing for the livestock to eat.

It is slightly toxic, due to the flavone glycosides linarin (peganin) and pectolinarin and to iridoid glycosides antirrhinoside and glycosylaucubin in the leaves, but that isn't much of a problem because animals avoid eating it. Hay which contains a lot of yellow toadflax will cause diarrhea and colic in horses, but the effects are rarely serious.

The pretty flowers are attractive bees. Because the flowers are closed, the chief pollinators are bees, which quickly learn where to land to have their weight pull down the lower lip of the flower, so they can  reach in for the nectar. That's fun to watch. 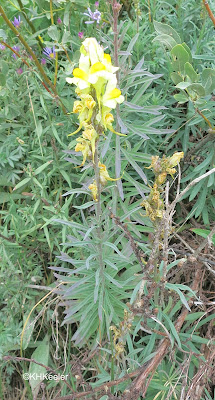 Yellow toadflax is so attractive you can easily buy seeds online. Some "wildflower seed" mixtures include it. Only some of those websites mentioned that it is a serious weed some places.

Yellow toadflax has been used as a medicinal herb in Europe and North America for centuries. The usual method is to dry the whole (aboveground) plant and brew it as a tea. Usually it is used to treat digestion and urinary problems or made into a cream to apply topically for skin orders. None of these have been verified by scientific studies, but the plant contains anti-inflammatory compounds and will induce sweating and urination. (Note that it is slightly toxic.)

Finally, yellow toadflax was a traditional dye plant in Germany and used as a dye by Menonites in the United States.

Despite articles about yellow toadflax that say it was a medicine and a dye, it is rarely included in historical lists of European medicinal herbs or dye plants. It is in Gerard's Herbal (1633) and Culpeper's (1653), but Dioscorides (64 CE) wrote about a different species of Linaria, and it was not in Macer (1260). Fewer than half of my books on medicinal herbs from include it. Similarly, yellow toadflax is included in only one of my 19 books on natural dyeing. It is not in Cardon's encyclopedic Natural Dyes, which, considering Cardon is French and the book was written in French, makes it unlikely that it was a major dye plant in Europe. Maybe I don't recognize its name--Culpepper called it flax-weed--but I doubt it. My tentative conclusion was that yellow toadflax was either a minor herb and dye or used only regionally, but there may be more to the story.

It produces a fine dye. With fresh plants, Sheron Buchele Rowland made a strong yellow dye using an alum mordant, and a rich olive green with iron as the mordant. (Alas, I can find no photos). As a noxious weed, we comfortably collected it on public land in Wyoming.

Of course there is yellow toadflax folklore. It could be used as an amulet to protect from evil. Or, in Scotland, you were advised to circle three times around a patch of yellow toadflax to break any spells or hexes that had been cast on you. (Which brings up the image of walkers routinely detouring to circle the yellow toadflax.)

I've seen enough big stands of yellow toadflax to understand why states want to eradicate it, but I still remember as a child thinking it pretty, so it is hard for me to dislike it. Admire it when you see it, but don't help it spread.

Note about plant families: recent DNA evidence has discovered previously unknown relationships and so move familiar plants into different families. One of the big winners is the plantain family, Plantaginaceae, to which common plants like yellow toadflax have been moved. In older literature, yellow toadflax was in the Scrophulariaceae.