It was November and San Franisco's flowers were blooming!

California has a "Mediterranean climate." That is, the pattern is similar to that in countries bordering the Mediterranean Sea, for example, penninsular Italy, Greece, southern Spain and southern France. There, it rarely gets below freezing and all the rain falls in "winter" (October to March) while "summer" (April through September) is hot and very, very dry. Lovely places to visit in the dry season, and a curious climate if your idea of normal is rain all year and a cold winter.We see California through an eastern U.S.-northern Europe lens--I certainly do--and try to impose spring on them in April. Temperatures warm then, it is true, and there's the last of the rain, but it doesn't fit particularly well.

It is fun realizing that at one time, Rome ruled Europe, and its climate was the standard. People planted their crops in October, harvested in May. Charlemagne (768-814), Christian king of semi-Romanized people living in what is now France and Germany, strong-armed his subjects into planting crops in April. They resisted, because classical agricutural writing and Roman tradition told them to plant in October, even though that wasn't a good fit with the climate of central and northern Europe. (More on Charlemagne link, his month names).

That was a long time ago. In the US, spring and planting are in April-May, fall and harvest in September-October. Yet, in California, the growing season begins with the rain, in October.

I was back in San Francisco in early November 2021. The 2021 rainy season had started with heavy rain. The total rainfall in October and November was 8.44"; normal for those two months is 3.11". A climate where it doesn't rain for six months and breaks its drought with record rain is likely to flood, and California did. But, in addition to water damage and erosion, all that water recharged the soil, and plants everywhere burst into bloom.

Cities and parks water their plants. I can't say everything I saw was the result of Mediterranean-spring rains, but I am sure all that extra water encouraged flowering.

As did ornamental shrubs 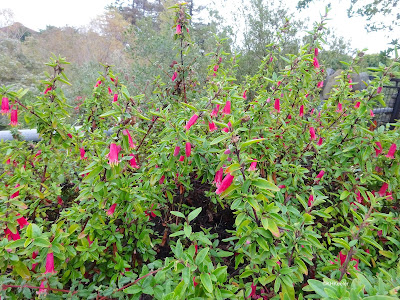 Some flowering was dramatic:

These agaves were probably 35 years old. Detecting abundant water, they committed to flowering, the one time in their lives that they flower. When the seeds are ripe, these plants will die.

This native sagebrush (Artemisia), shown below, was flowering. It was growing in a flower bed and, being wind-pollinated its flowers are not dramatic (yellow shoot).

This beautiful big shrubby monkey flower, another native, was also in bloom:

Beyond the planted vegetation, there was also a lot happening:

Seedlings had germinated in the cracks in the pavement:

This California poppy, although a native wildflower, clearly counts as a weed in this corner of a lawn:

Here, the grass has been replaced by a weedy composite, probably the coast dandelion, Agoseris apargioides, a native wildflower of sandy coastal dunes. (Much of northern San Francisco was once coastal dunes). It was flowering: 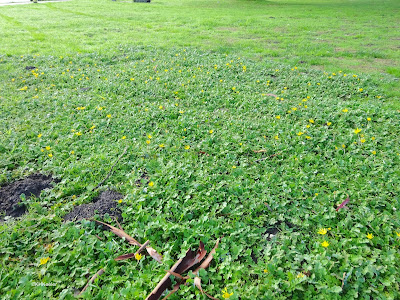 Below, a closer look at the flowers in the photo above. They are not common dandelions, as you might think from the distance photo, although dandelions were flowering too.

Here, at the base of a sign on a street corner, a little mallow (hibiscus family, Malvaceae) with big leaves. Probably (there are other similar species) it is Malva nicaeensis, called bull mallow or, less often, cheeses, a European weed.

The causes of the flowering I saw are surely complex: some combination of seasonal or day-length cues, as well as the stimulus of (more than!) adequate water. Often, each plant species has conditions that initiate flowering that are not quite the same as the conditions for another species. But, unless people provide water, San Francisco plants have to have the winter rain to flower, whether or not they flower immediately or store the water for later. 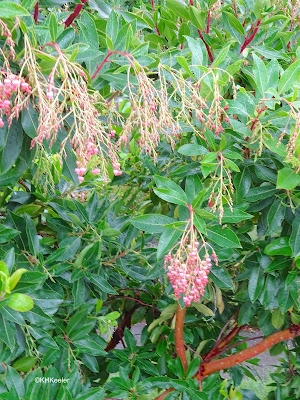 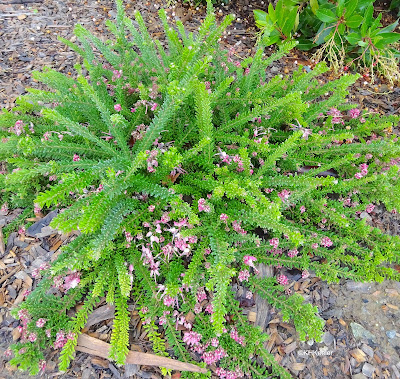 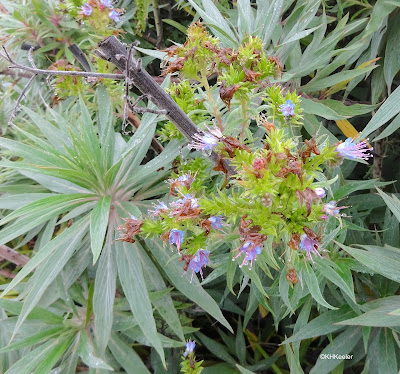 My photos show you just a few of the plants I saw in flower. My husband had opposed a November trip because "rain is likely." Yes, we had a day of rain and one cloudy day, but we had three of bright cool sunshine. And the flowers were wonderful! I recommend San Francisco in November!

Posted by A Wandering Botanist at 2:00 PM