We see the world around us, but we can't see what it was. Visiting San Francisco in November, the National Park Presidio was full of informational signs about the history of the site, pointing to multiple transformations since Spain established a fort there in 1776. (Native Americans left their mark too, as mounds of discarded sea shells, which have been dated back to 740 CE).

Some changes were dramatic. This is the creek as I saw it, the drainage full of shrubs (Thompson Reach).

Informational sign where I took the photo above showed open fields with the stream underground: 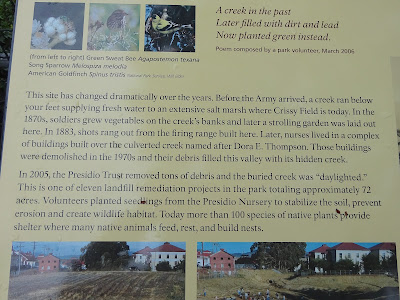 Below, another photo of Thompson Reach from Lincoln Boulevard, including the informational sign. The white building with the red roof is straight ahead my photo, through all the shrubs. 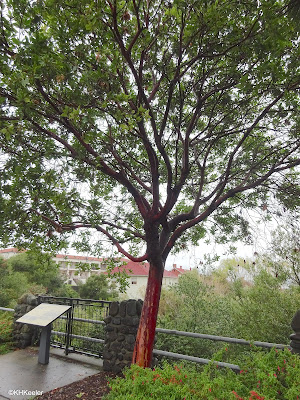 Much of the area that is now the Presidio in San Francisco was coastal sand dunes when Europeans came. Builders leveled those and superimposed buildings and lawns, trees and ornamental shrubs. There was a stream. The military base grew, and the stream was channeled and sent underground. When the Presidio became a national park in 1994, the Park Service began resurrecting the stream (photos above are part of that project). Continuous human-created changes.
Of course. To live there, houses were built, torn down, and rebuilt. Roads were built and later rerouted,. The informational signs point out the upgrading officer housing to have indoor plumbing, laundry rooms, and electricity. Originally it was all officer housing (and only officers could be married), then houses were built for sergeants and their families. The sutler's house was moved to a different part of the base. Today buildings have been converted to offices and some apartments.
Rearranging goes on. The area in the photo below will feature native plants, when fully planted:
And turnover happens. People add and replace trees. This little tree
may one day be as big as these:
When I returned home, I saw my suburban yard in a different light. Like the Presidio, all the buildings and plants were put there by people, mostly before I was here to notice. My yard slopes southward and was probably grassland (shortgrass steppe) when Europeans arrived. Now there's a paved street with a sidewalk, houses with Kentucky bluegrass lawns, carefully planted trees like locusts, spruces, and apples.

To judge by other properties in the area, after Europeans arrived, my bit of land was either grazed by cattle or plowed and planted with crops like winter wheat (Triticum aestivum) or grasses for hay. Agricultural use ended when a housing development was built in the late 1970s. Many exotics and very few natives were planted then. The owner before me (the 3rd, maybe) added water-efficient plants, some of which are native, but I think my yard is still more than half exotic or non-local American plants.
Well, of course.

But we walk through our built environment without seeing the massive changes we have made.

I am trying to figure out what I think would be desirable land-use. I don't really want to live on a prairie hillside, bouncing over unpaved roads to my door. I like the amenities of suburbia or I'd live somewhere else. But it is also true that American settlers largely replaced native plants and animals with ones they were familiar with, from Europe and from the eastern U.S. This has left us in the 21st century with a major educational project, to introduce people to native plants and animals and convince them to grow them in their yards and in the public spaces they support. So very much of North America no longer supports its natural communities.

A variety of organizations are promoting natives for suburban yards, but it is a tough sell.

First, there's the terrific information-gap. Only a couple generations before me, in the central U.S. there were few people. It was dangerous and scary, and people struggled to survive. They brought exotics for food and for familiarity, and taught their children the same values. We have convince people that the wild has been banished, and to appreciate the organisms native to the place they are living.

Secondly, this project is extremely local. A few hundred miles away, "native" is different. Thus, when we ask people to embrace natives, those differ from place to place. We can't do "one plant list fits all" to bring natives to suburbia across the U.S.

I don't know the answer. But, as you walk or drive through your neighborhood, try to envision it 300 or 500 years ago. What part of that can you still see? Then fast forward 300 or 500 years. What is that likely to be? We must ask: what can we restore, despite the presence of rows of houses and paved streets, to provide sustainability and protect our natives? It is a lot of work, but the National Park Presidio is restoring natives while supporting outdoor recreation within San Francisco. We must all build that kind of future.

Posted by A Wandering Botanist at 1:00 PM