Blue grama and hairy grama, Bouteloua gracilis and B. hirsuta, respectively, are short grasses that are very important in the dry plains of the Midwest and West. They can be found from  Canada and Mexico and east and west to coastal states. I am talking about them together in this post because they are hard to tell apart. A few specialists can tell their leaves apart, but, mostly, grassland ecologists don't try, relying on the seed heads to recognize the differences.

Each seed head of hairy grama ends in a distinctive point, called a projecting rachis. (The rachis is the axis from which the flowers and later the seeds hang). Blue grama seed heads have no distinctive point (lack the projecting rachis). Beyond that, they are very similar, with heights generally 6" to 28", the leaves close to the ground, a few inches long and less than 1/8 inch in diameter. Other characters also differ, but most vary too much to easily separate the two species.
(The pictures on the USDA web site show hairy grama without the projecting rachis but every identification book I checked --7 of them, see References--separated the two species based on the projecting rachis. I think the USDA has a bad photo posted. )

Hairy grama with seed heads ending in a "projecting rachis":

Blue grama, with no projecting rachis. They appear more vertical than hairy grama, but that varies too much to help with identification. 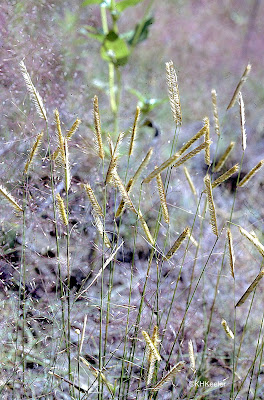 These two little grasses are warm season grasses, becoming active only well into spring but tolerating heat and drought very well, going dormant for the year with the earliest frosts. Since their leaves are only 1-3" high, they are easily overlooked but they are very common and widespread. The range maps show both as all across the North America, but hairy grama grows on rougher ground, such as rocky slopes, and prairie hilltops, while blue grama is found all across flat open plains and is one of the two or three most abundant grasses in mixed and shortgrass prairies.

Both are very drought-tolerant. Blue grama rolls its leaves and goes dormant when there isn't enough water, but more of its tissues survive that stress than in most plants and it greens quickly again after it rains. It moved way east and increased in numbers during the drought of the 1930s, replacing less-hardy plants. In addition to a net of roots near the surface, grama grass roots go down several feet, with 4' recorded for hairy grama. A four-foot root doesn't sound all that long until you remember that the plant only stands 6-12" high; the root is four or more times longer than the above-ground plant.

Across their large range, blue and hairy grama vary in height, hairiness, coloration, and other traits. They also vary in chromosome number. Blue grama plants had 2n (number of chromosomes in a nonreproductive cell) of 20, 28, 35, 40, 42, 60, 61, 77, and 84. For hairy grama, 20, 40, 50, 60 and some odd numbers like 51 have been counted.  This is intraspecific polyploidy, a kind of variation surprisingly common in plants, with little obvious impact on how the plant looks or functions. Presumably that variation--height, color, chromosome number, etc.--adapts the grama grasses to tbe able to grow in environments across their amazing range, Mexico to Canada, New York to Nevada and California.

The seeds of blue and hairy grama are tiny but are eaten by many species of birds and small animals. The Western Apache and the White Mountain Apache gathered the seeds, ground them, and ate them as mush or baked them into bread. That says a lot about how abundant these little grasses can be, that people found it worth while to gather them and to cook with the tiny seeds.

The White Mountain Apache and Zuni tied blue grama stalks together and used the stiff end as a comb and the flexible end as a small broom. The Zuni filtered goat's milk through bundles of dried blue grama. The Hopi used the stalks as filler in coiled baskets.

The Lakota used blue grama in a game: most plants have two spikes (flower heads) per stalk; the game was to find the most with three spikes.

Montana Indians (not otherwise identified) said you could foretell the winter with them; if most blue grama plants had only one fruit spike per stalk, it would be a mild winter, more fruit spikes per stalk heralded a severe winter.

Most of what I have written is about blue grama, because my sources say much more about it. The indexes will refer to a single page for hairy grama and a dozen for blue grama. Which is unfortunate because I like hairy grama better; I think long ago I felt sorry for hairy grama because I thought it had an unflattering name, "hairy", while the almost identical blue grama, is "blue" and "graceful."

The word Grama is from the word for grass in Latin, gramen. Bouteloua honors the Spanish botanists Claudio Boutelou (1774-1842) and Esteban Boutelou (1776-1814). The species epithet gracilis means graceful (look at the photo with the eyebrows), hirsuta means hairy, like its English version, hirsute. The common name hairy grama reflects its scientific name; likely it has more tiny hairs than its relatives. Blue grama has never looked blue to me but presumably it does, somewhere.

These are important grasses--important to grazing animals, important to birds, important to ecosystem structure--across most of North America. Blue grama is recommended as a pretty garden and landscaping plant. I'd endorse hairy grama, too, with its cute eyelashes.

Barnard, I. 2014. Field Guide to the Common Grasses of Oklahoma, Kansas and Nebraska. University of Kansas Press, Lawrence, KS. 2014.

Checking how blue grama and hairy grama are told apart, I looked in: