Purple prairie clover is a very pretty native wildflower. It stands about two feet tall (sometime 3'), in a compact clump. The flowers are light purple and it will flower all summer. Most abundant in the central Midwest, its native range included meadows in the eastern U.S. and forest gaps in the mountain West, moist grasslands in the desert Southwest, and warmer sites in southern Canada. Today, it has been planted even more widely, but its native populations in Michigan and Ohio are presumed extinct, and it is endangered in Tennessee.

Purple prairie clover, Dalea purpurea, is a legume, in the pea family Fabaceae, as the name clover suggests. It forms a symbiotic mutualism with nitrogen-fixing bacteria in its roots, trading carbohydrates for sugars with the bacteria, and scattering excess fixed nitrogen, essential to plants generally, into the soil, makng the soil  richer and more nutritious than before purple prairie clover was there.

Its scientific name, Dalea, honors the English botanist Samuel Dale (1659-1739), a British apothecary, physican, amateur botanist, and plant collector (bio). The species epithet, purpurea, means purple. There are about 190 species of Dalea known. The genus is native to the New World, with plants from Canada to Argentina. The USDA Plants database gives 64 species of Dalea native to the United States. Most of them have small ranges, one or two states, scattered all across the map. Dalea purpurea is one of the few with a broad range. The old prairie literature calls it Petalostemon purpureum, but all the North American Petalostemon species were reclassified as Dalea species more than 50 years ago.

Although widespread, purple prairie clover is especially a plant of--as its name says--prairies, North American grasslands. And, as you would expect for a native, it will spread if the conditions are good, but it isn't aggressive ("weedy.")

Measuring the length of prairie plant roots is difficult. Lots of what we know is due to the work of J. E. Weaver (1884-1966, bio), Professor of Botany at the University of Nebraska in Lincoln. Weaver, with a career spanning the Great Drought, became The authority on native grasslands and their response to drought, above and below ground. We always say "work of J. E. Weaver," because he published the papers. But when I joined the University of Nebraska in 1975, there were still people who remembered Weaver, and they were clear that most of those amazing roots were excavated by Weaver's students. That makes sense; even fine loess soils are hard to dig in and roots wander around in three dimensions. It was tedious hard work diagramming roots. I've tried to follow roots of plants in the much easier-to-dig sands of the the Nebraska Sandhills, and you lose them, break them, follow some other species' root...worth doing but aggravating. What Weaver and students produced were impressive diagrams of root lengths, showing prairie plants are 1/2 to more than 3/4 underground. Given how difficult it is to get this information--find a healthy plant in a place you can dig, dig a pit deep enough to get all the roots, probably take it back to the lab in a big box (heavy, awkward, messy) and carefully find the roots of the plant you want and not its neighbors--it isn't often repeated, so observations on a very few individual plants represent even widespread species like purple prairie clover. And we are very grateful to J.E. Weaver and students for doing the work! 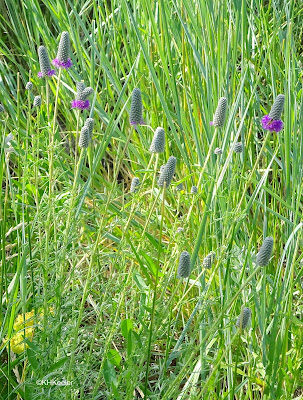 Those extensive roots make it quite drought-tolerant, both enduring drought well and rebounding at the end of droughts. Making deep roots takes time, so individual plants live several to many years. The prairie ecologist David Costello (1904-1990) wrote, "If you know where they are, you can return year after year to see the new stems and the beautiful blossoms...." (p. 45).
The only estimate of the total life span of purple prairie clover that I could find was from a 1932-1972 study of prairie plants in Hays, Kansas in which purple prairie clover plants lived a maximum of 9 years. Hays is west of the center of purple prairie clover's range and the study ran over years including the Great Drought, but it is a rare and nearly unique record. I look at the roots going down 6' in Weaver's picture and wonder if that little plant did that in only 9 years. Maybe. We really know very little about how fast purple prairie clover can grow, let alone the extremes and averages of size and growth.  (Curiously, the Hays study was carried out by two men who had been students of J. E. Weaver, F. W. Albertson and G. W. Tomanek. And, for the record, the measurements were done, each year for 40 years, by students in a range science class.)
Purple prairie clover is also resilient to fire. Prairie and forest fires burn the above-ground plant, but under most conditions, the roots send up new shoots after the fire, within days if the fire is during the growing season. Most prairie soils have some purple prairie clover seeds lying dormant, and fire induces germination, so that seedlings emerge after the fire as well. Purple prairie clover is edible to grazers and browsers and considered a valuable forage plant for livestock. It is in fact edible to humans; Native Americans, such as the Dakota and Oglala, made tea from the leaves, and others, the Comanche, Lakota, and Ponca, chewed the roots for the pleasant taste, basically as candy. An infusion of the root was used medicinally to keep away sickness (Pawnee), against pneumonia (Navajo) or for measles (Awaki). 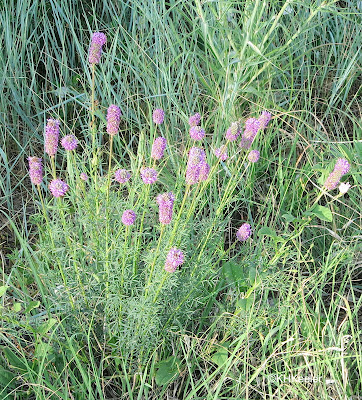 In addition to being edible to big animals, it is a host plant for several American butterflies and moths, the lycaenids Reakit's blue, Hemiargus isola (link) and marine blue, Leptotes marina (link), and the pierid the southern dogface, Zerene cesonia (link) and eaten by a suite of beetles and grasshoppers.
Appreciating the tough but flexible stems, the Pawnee used the plants as brooms.
Today, purple prairie clover is a popular plant for gardens and grassland revegetation. The seeds can be difficult to germinate, but the plants are easy to grow. Under good conditions it will flower the first year. The pretty pink-purple flowers open in May and June and continue all summer. They attact bees and butterflies. The plant grows in an attractive clump, not spreading agressively. It exports nitrogen, fertilizing the soil, and can survive droughts. On the down side, deeply rooted plants like purple prairie clover are tricky to transplant and the roots may send up a shoot despite much of the top having been moved elsewhere. As you can tell, I think this is a highly desirable native wildflower; watch for it, grow it if you can.

Posted by A Wandering Botanist at 2:27 PM