English ivy, also called common ivy or just ivy, (Hedera helix, ginseng family, Araliaceae) is a large woody vine native to central Europe. (See last week's blog about its botany link). It was and is conspicuous, a plant most people know. The plant is big, climbing and clinging, long-lived and evergreen. All of these feature in its rich folklore. 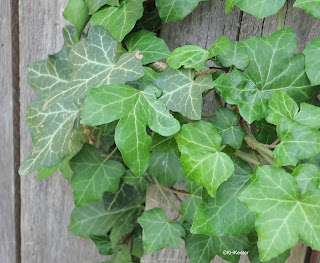 English ivy was reportedly sacred to the Egyptian god Osiris. Osiris taught humans agriculture and fertility. He was a king who gave them laws and civilization. But he was murdered, resurrected, and then descended into the underworld as the god of the Afterlife. He was god of death and judge of who entered the Afterlife. He controlled the moon's cycles and the flooding of the Nile, critical to agricultural prosperity. All of this led to a strong association with the crop fertility. I do not find ivy in the easily-available descriptions of Osiris until classical Greece. At that time, worship of Osiris was mixed with the Roman gods Hades and Dionysus, Hades because he was god of the underworld, Dionysus as the god of fruitfulness and vegetation. As far as I can tell, English ivy does not grow in Egypt, except as people planted it in a garden. It seems likely ivy was sacred to later worship of Osiris but came from Europe with Dionysus.

Common ivy was very definitely and dramatically a symbol of Dionysus. Dionysus, called Bacchus in Rome, was one of Greece's 12 major gods. He discovered grapes and spread them across the world, traveling all over Greece and as far as India. In Greek worship, he reigned over grapes and wine, but also the fertility needed to produce grapes, and so, by extension, fruit, orchards, and plants generally. Wine is a source of celebration; Dionysus was the god of festivity and theater, religious ecstacy, ritual madness, and insanity. His legends are a mix of uplifting and shocking, much like the reputation of wine. He led happy celebrations and promoted agricultural prosperity, but caused many to go insane or be murdered. He killed those who opposed him as he spread grapes to other peoples, and his followers, partying to excess, committed grotesque murders while intoxicated.

Dionysus was usually portrayed as wearing a wreath of ivy--not grapes!--on his head and carrying a staff (thyrsus) made of ivy-wood and from which ivy vines trailed. The connections are many. Like grapes, ivy is a vine. Grapes were the sacred tree (woody vine) of the 10th month in the pre-Christian calendar used across much of Europe and the tree of 11th month was ivy, linking them in fall celebrations. They grow together in European forests. Ivy is evergreen, keeping its leaves all winter and beyond. That is a nice symbol of immortality, which you might feel upon drinking wine, but practically, it meant that all year long, ivy was available for wreaths. Grapes lose their leaves. Grapes also have much bigger leaves and similar-shaped but bigger berries; ivy's smaller, attractive leaves and smaller berries work better if you want to make a circlet and put it on your head. Ivy's cluster of berries develop in the fall and stay on the plant all winter, so celebrants could get a wreath with fruit in imitation of grapes all winter. Finally, there is a subspecies of ivy (Hedera helix ssp. poetarum) from Italy and Greece with yellow fruit--so ivy could represent both green and dark blue grapes.

Ivy also worked symbolically for a god of agricultural fruitfulness because it grows so big and spreads so vigorously.

The connection with grapes made ivy into the symbol of a tavern. A branch of ivy over a door meant "wine sold here." Long after they became Christian, people tied vines of ivy around their heads to prevent drunkenness. Ivy was believed to prevent intoxication if consumed; generally people took a few berries in water or chewed a leaf or two. The plant is considered pretty toxic--a few berries or a leaf will make children vomit--but apparently were tolerated by adults, or in fact the vomiting did reduce intoxication. This application of ivy is no longer one of the uses of ivy, as listed on medical websites.

As the tree of the 11th month of the pagan calendar, ivy was sacred and celebrations during that month (28 days, starting Sept. 30) featured it. Some of my sources suggest Dionysus' followers became intoxicated after chewing ivy or eating the berries. That is possible; the effects of ivy poisoning include hallucinations and delerium.

Ivy's holiness was enhanced by the fact that it produced a red dye. Red was painted on the faces of statues of Greek and Roman gods and heros, representing both health and fertility. The red dye was made by tapping the branches in the spring and collecting the gum. This, boiled with urine, turned a blood-red color and was used to paint a variety of surfaces.

Across northern Europe, ivy was an important part of the pagan winter solstice celebration because it was evergreen. It had leaves and berries when almost every other plant was leafless. Holly (Ilex aquifolium), also evergreen, was the other important pagan plant of the season. Ivy represented the female, holly the male, at the rebirth of the year.

Christians welcomed holly as part of Christmas celebrations, finding symbolism in its pointy leaves and red berries. They were cool on ivy as a representation of ecstacy from inebriation and the sexual symbolism associated with the pagan solstice celebrations; ivy had a much smaller role in Christian symbolism than it did in pagan Europe.

Nevertheless, people of the Christian era had rich ivy folklore. Ivy clings to trees, so it represented love and marriage, and, being evergreen, long-term fidelity.

It was used in folk charms for foreseeing one's husband or wife. Girls in Dunbartonshire put a leaf in their bodice and chanting,

(The above is from Ireland; I found versions with the same verse that said a leaf in her pocket (Oxfordshire, England) and against her heart (southern Scotland).)
Young men wanted to know who they would marry, too. An Irish charm had the boy gather ten ivy leaves in silence, then throw away the tenth leaf. The nine other leaves were left outside until he went to bed, when he placed them under his pillow and in his right sock, chanting,
"Nine ivy leaves I place under my head
To dream of the living not the dead
If ere I be married or wed unto thee
To dream of her tonight, and for her to see
The color of her hair, and the clothes that she wears
And the day she'll be wedded to me.
[Murrell p. 57]
Or a boy could take a pointed ivy leaf and a girl a rounded (mature) one and, on Halloween, throw them in the fire. If the burning leaves jumped toward each other, then the couple would marry.
People continued to believe ivy protected from drunkenness, but for Christians it was because ivy was the enemy of grapes, not grapes' partner. Drinking berries in vinegar before alcohol, or, after, water in which bruised leaves had been boiled, was thought to prevent the bad effects of heavy drinking.
Drinking bowls made of ivy wood were supposed to protect the drinker. If wine was left for some time in the ivy-wood bowl, especially a bowl made from an old climbing plant, it imparted protection from infection and disease to the wine. Drinking from ivy-wood bowls specifically protected the user from whooping cough.
Ivy growing on the house was thought to protect from evil. If the ivy fell off or withered, it was a sign that something was very wrong, likely that the house would soon belong to someone else.
Ivy could be used to predict the coming year. On New Year's Eve, in the dark, a green leaf was put into a basin of water. If, at Twelfth Night's eve, it was still green, the coming year would be fortunate. Spots on the leaf predicted illness, and corresponded to the part of the body to be afflicted, near the stem the head, in the middle, heart or stomach and at the leaf's edges, arms and legs. Spots all over meant death within the coming year. Another version of this was to put a leaf in water on Halloween; if there was a coffin-shaped mark on the leaf in the morning, the person was going to die in the next year.
An ivy leaf wreath worn on the head was believed to keep hair from falling out after an illness.

Ivy had sinister aspects. It was  unlucky to bring ivy into the house, especially at Christmas. This may have been because it frequently grew in graveyards, often planted on graves to represent love and fidelity; people avoided plants associated with death. (But I also found that ivy was favorable, especially to women, as part of Christmas decorations, suggesting pagan traditions hung on.)

If sleeping under an ivy-tree, you risked a sleep from which you would never awaken.

In the Victorian language of flowers, ivy symbolized fidelity and marriage.

Quite a change, from the symbol of the god of wine to representing fidelity. Today, ivy's attractive leaves are frequently used in floral arrangements, indoors and out, but largely without a thought to its historical symbolism, I suspect. 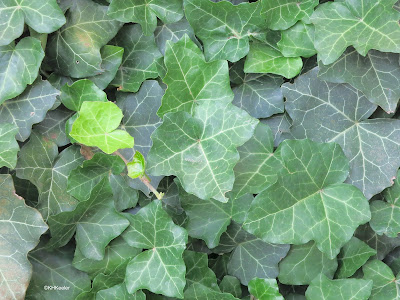 Posted by A Wandering Botanist at 2:28 PM